After a long silence (which I apologize) I'm finally able to show a new WIP video, and I hope you'll like it.

After a long silence (which I apologize) I'm finally able to show a new WIP video, and I hope you'll like it.

I wanted to take the time to explain a bit more on what I've been working on for this video :

This is a simple map that is mostly used to make me think about an efficient workflow for large asset creation and placement, as well as to determine some unknown parameters. The map is temporary, and will be entirely redone when I'll have a better of idea of what is the optimal size of the map, how large the street should be, how high the buildings must be, etc...

For now I'm using a tile system to help me reduce the number of assets I need to produce. 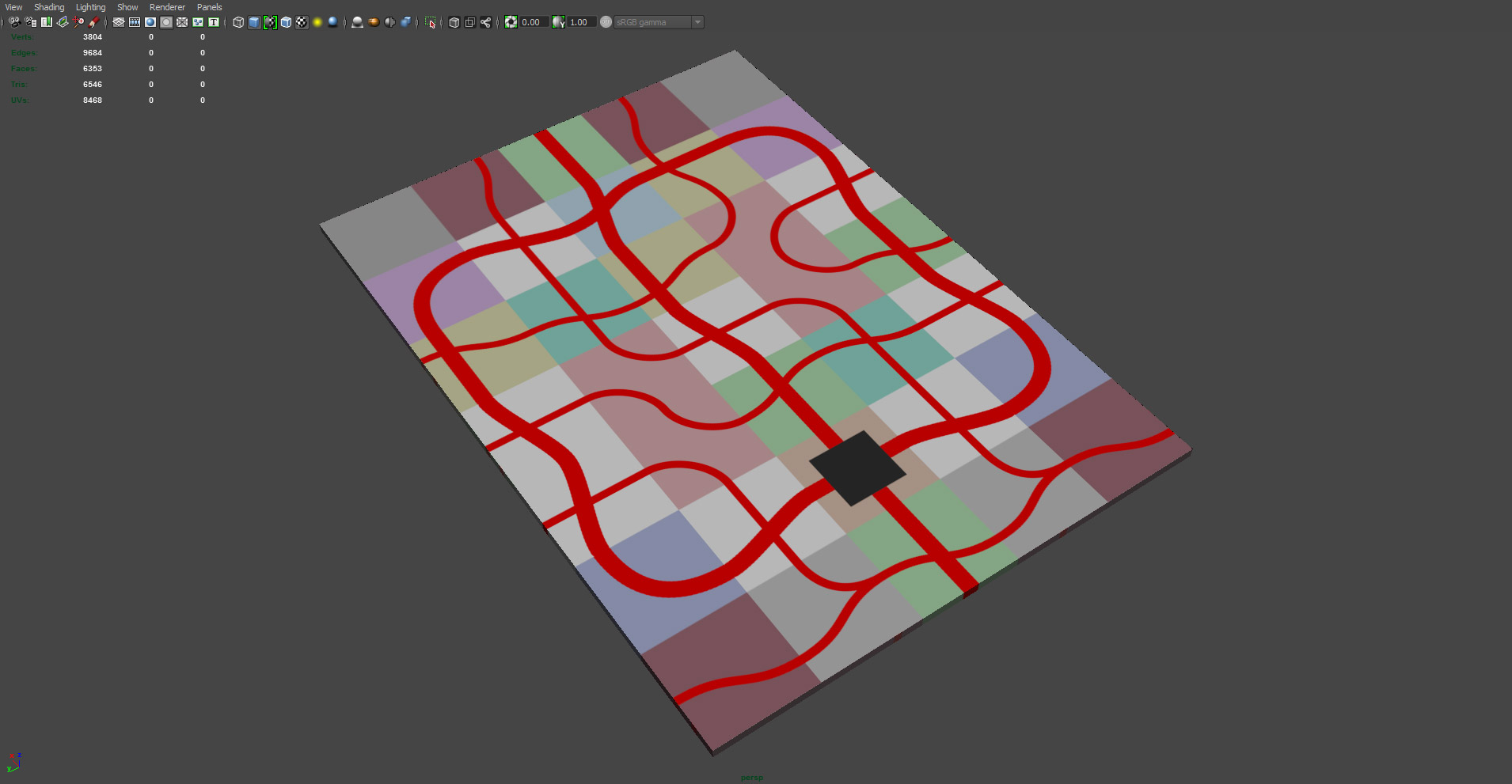 On this layout that I'm using, each color correspond to a different tile. And while the map is composed of around 35 tiles, there's actually only 10 different colors, which means 10 different tiles (which are rotated and mirrored). This way, I can cut the amount of work by 3

For the building, it's pretty much the same idea. Each colored blockmesh represent a different building, and will be easily replaced by the final version when I'll have started working on it. 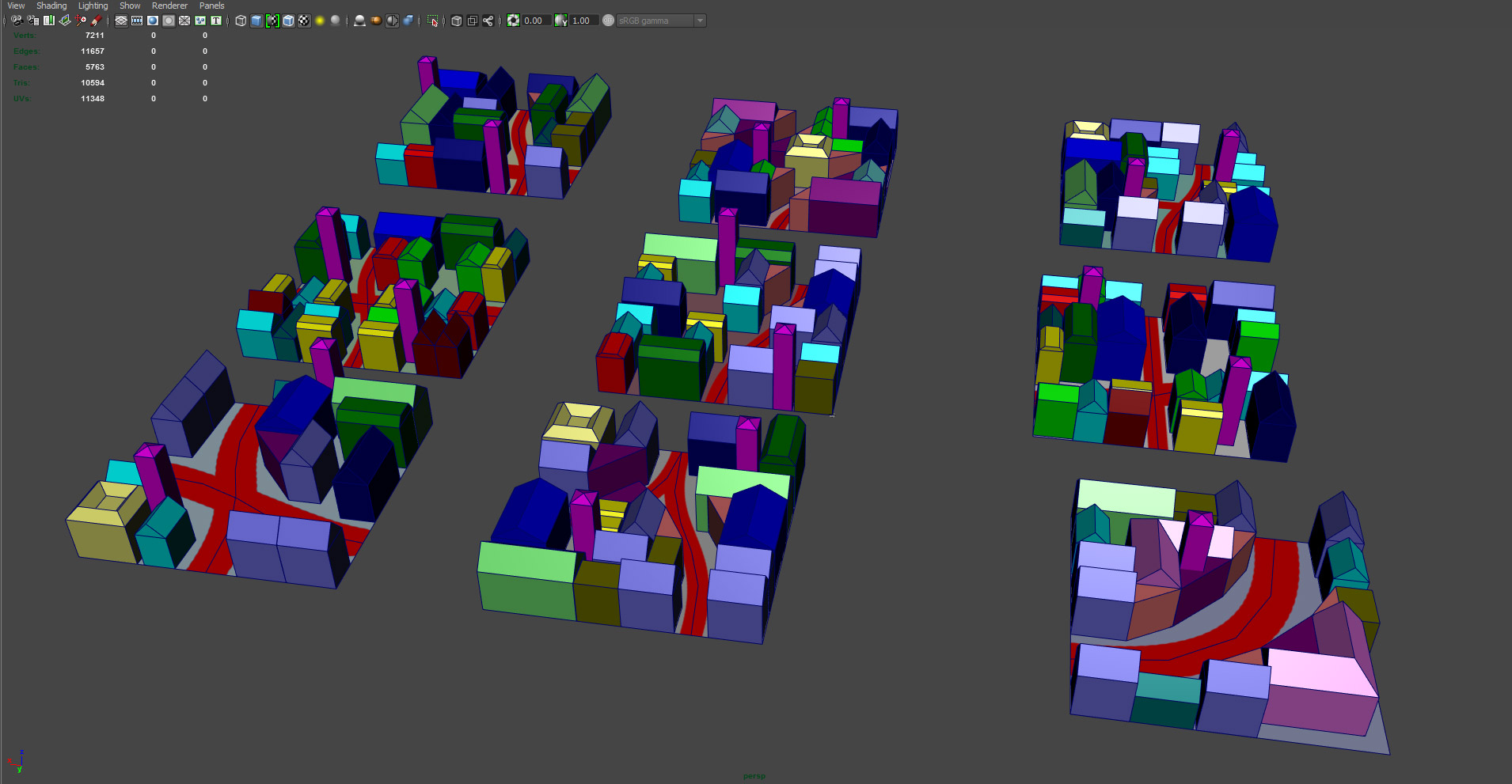 The other use of this test map is to test some parameters. This way, since I was able to implement a simple gameplay, I realized of some things, like the streets are too narrow for now, and the player keep bumping on walls while battling against titans. This can be caused by a lot of things, like the dodge distance too long, the gravity that could need some tweak, etc... But the thickness of the street might also need some adjustments (and I'm not even mentioning the fact that the titans can't enter some small streets :D)

Again, with the idea to optimize my work time, since I'm alone working on this project, I create some tools (really not difficult to do) to automate some tasks, like the creation of objects along a spline, or a automatic snap on ground, in case I'd like to add a height map terrain, and have the buildings following it automatically, without re positioning them by hand, one by one.

As someone with an art formation, that was probably the task I feared the most. But I'm finally really happy to have something functional, even if it's still really simple for now. 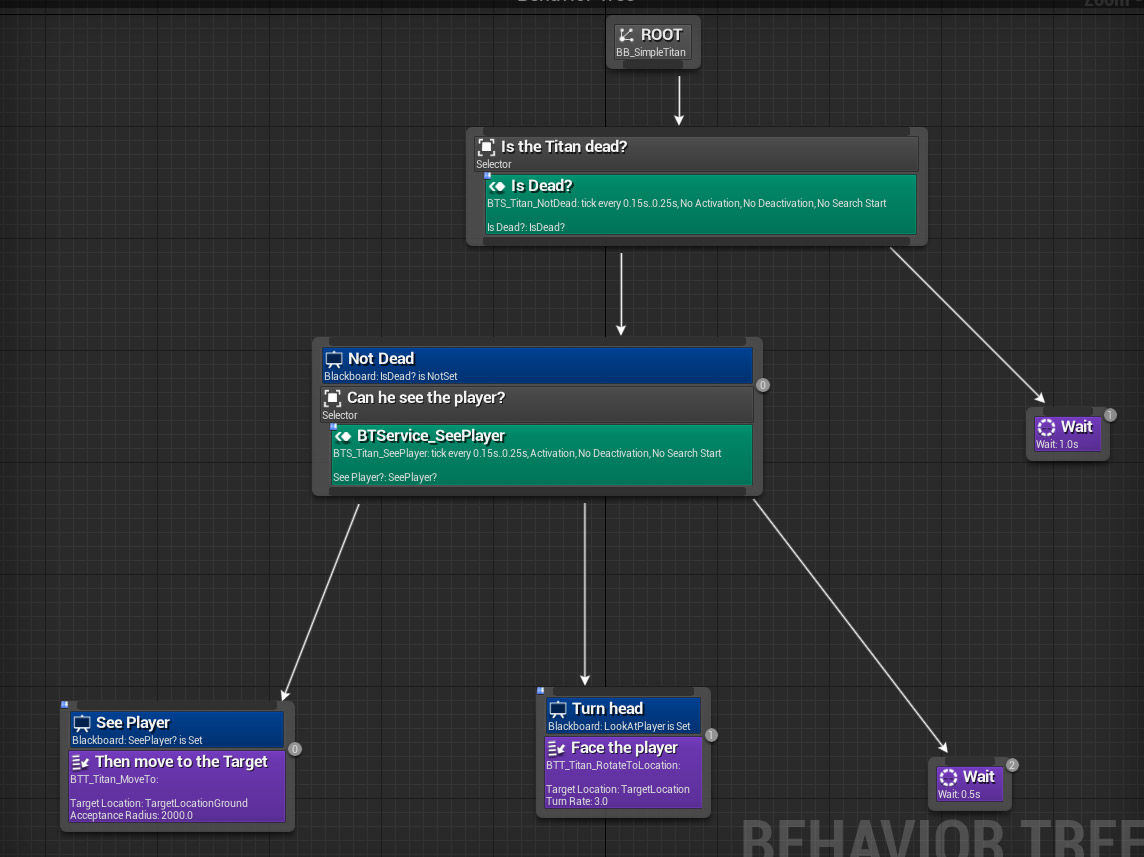 While Unreal Engine come with built-in vision system, I couldn't find a way to attach the cone vision to follow the head, so I had to do a custom one in blueprint. 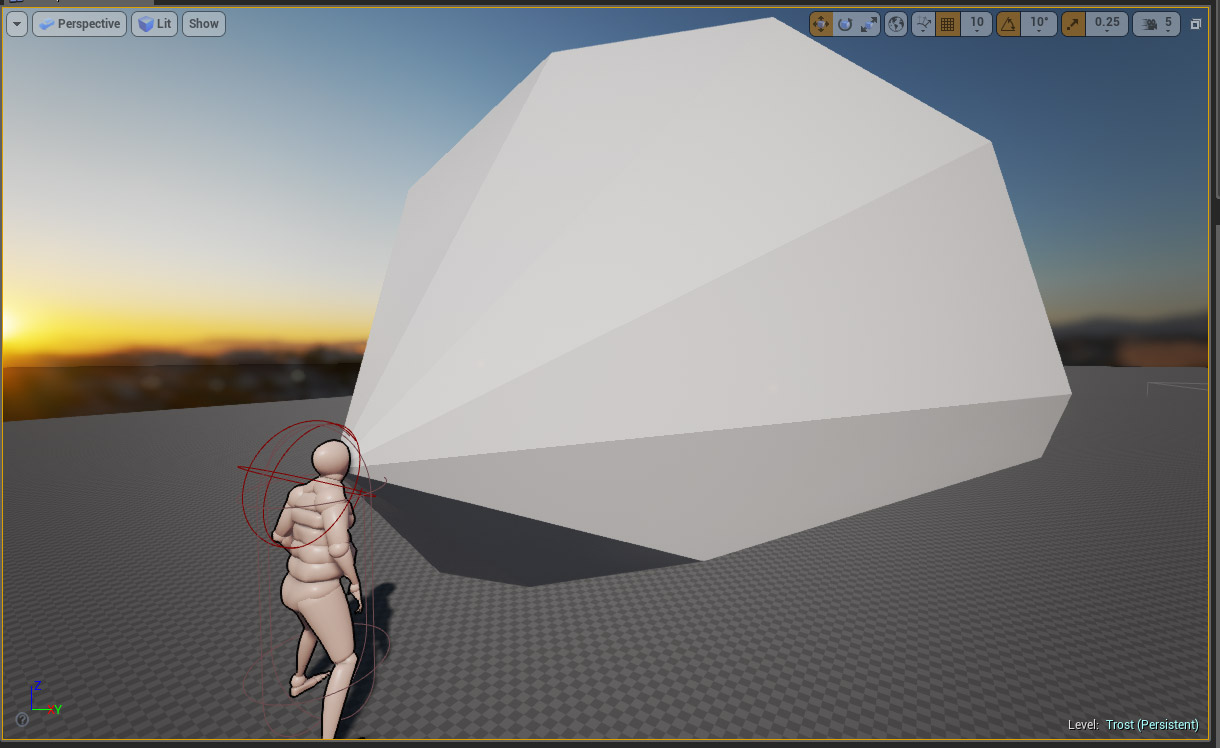 It's simply just a cone attached to the head. As soon as the player enter the volume, I'm tracing a line from titan head to the player, and if this line doesn't encounter any obstacle, that means the player is visible by the titan.

Nothing really complex here, as I just use the built-in solution in Unreal to constraint all the bones of the skeleton to have realistic bend. I also added a bit of angular and linear damping at the end of the limbs to avoid infinite swings.

The aim tolerance help the player catch the titan. It's dynamic, which means the tolerance will increase with the camera movement speed and the distance of the titan. The game is thought as a fast pace action game, and the idea about this feature is to reward player with playing with quick speed and encourage them not to stay static to aim their target.

A word about dodge burst speed

I would like to do an ultra fast paced action game, which would lean more toward the arcade style, almost (and only almost) old school, instead of pure simulation. I always liked games which offers almost instant and precise control, and while a lot of games which have integrated body awareness, or momentum and weight have been fun, it's not really what I'd like to aim for. Actually, my inspirations are more with japanese beat'em all or action games, with quicksteps and really fast dodges, which responds instantely.

Now that doesn't mean that the dodges will not receive any more tweaking in their physics or activation, but the philosophy will remain the same.

About concerns about difficulty, and the fact that would make the player too overpowered and untouchable, I don't think it's necessary the case, and some games like Vanquish, Devil May Cry or Bayonetta have already proved that we can have demanding games that use quick dodge system. At the end, everything will depends on the balancing of the interactions between the ennemies attack and the player.

I'm hoping that the confusion is coming from the fact that all the elements are not there yet, and it's difficult to judge of the appeal of this system, and that it'll make a bit more sense when it'll be the case.

Thank you a lot for your interest and all of your encouragement. I have a blast working on this project :D

Awesome job, Sir. Is there gonna be a demo?

Very cool mate, keep it up

I like that you've spent so much time on design, and not just jumped in.
For rewarding fast paced play, not sure how well it would work but maybe make the aim tolerance higher the faster you move, and completely off when still, this would allow precise shots when still or slow so you can hit the exact target you want and take optimal routes, and easy shots when moving at speeds at which you really wouldn't have time to think about optimal routes anyway with. Good job :)

Thanks man,
That's exactly my intention here. The aim tolerance is dynamic so that the it's stronger during fast action time. I increased the intensity when static in the video just for demonstration purpose, But at the end, the aim tolerance is multiplied by the velocity. Which means, if you character as a velocity of 0, there's not aim tolerance ;)

Gave you a track on here man. As ive mentioned before, i´ll be available if you need something ;). Keep up the food work!

Wow, well done! I've seen your videos around, but didn't expect to see you on ModDB as well!

WHERE IS THE DAMN DONATION TAB??
I NEED THIS GAME RIGHT NOW.....SO MUCH BEAUTY!!!!

Your writing skills have improved immensely, Guedin. Or, at least, you're trying harder. And one of your fans have noticed. Please take pride in the ability to write with great skill and grammatical correctness.

haha that's not the kind of compliments I was expected but it's really nice to hear. Thanks man, English is obviously not my native language but I'll do my best to make it more presentable ;)

I would be SOOO happy to just play this now rather than wait for textures, models and general improvements and additions but I see why you don't wanna rush it. The work you've done so far is extremely impressive compared to other indie games and AoT games. Do you have any estimate time for when a demo will be released? It seems playable in this so when ever a demo is available I think we would all like to know. Plus I'm getting sick of AoT tribute game by Feng. It's so glitchy and annoying to play at moments.

I don't have any date for a playable protoype unfortunately. I want to have all the gameplay implemented before release something, so people will be able to judge the game with all the elements in place.

Nice Mate! Keep It Up! Is Nice Game That Kind Of Graphics Is Cool!