A look into where Grimoire is headed and a more accurate view of where the game will be when released. Part 1 of 2.

A Change in Destination
To understand where we’re going it will help to understand where we’ve been. For the last year Grimoire: Manastorm has been developed by a very small team. The game is, and has always been, ambitious. We set out to create a multiplayer experience on par with triple AAA games with the budget of a tiny indie studio. We’ve always planned to use money earned by Early Access to add features to the game, and we’re doing that now. However, therein lies the rub. Even with sinking every penny back into development we don’t have the resources to build the game we originally set out to create. That means cutting quantity or cutting quality. We have decided to cut quantity.

Every aspect of Grimoire is being iterated, improved, and polished. We are tabling our other ambitions in order to make the best game we can with the resources we have.This roadmap is the new direction for Grimoire. We’re excited about it, and we think you will be too.

One Mode to Rule Them All
A single, primary multiplayer mode for Grimoire allows us to keep the community united and raise the quality bar; Conquest is that mode…

And it’s getting a major overhaul. Check out DevBlog #25 for details on the general gameplay changes that are being made. In addition, we’re creating a new map event system that gives each map unique mechanics. For example: on Temple we are adding destructible obelisks that, when destroyed, unleash a swarm of AI enemies and reset ownership of the middle point back to neutral. There is more to it than that, but due to the iterative nature of this new system it’s better to just let you play it and give feedback. The goal of each map system is to create a unique and distinct feel for each map.

Conquest won’t just be as simple as five points with some variation in terrain and art- Conquest will be a series of scenarios that play to different strengths for each class as well as add a bit of unpredictability. None of these mechanics will detract from a skilled player’s ability to excel, but they will offer players of all skill levels opportunities to make tactical decisions that affect the map as a whole.

In addition to the Conquest changes FFA will be getting some attention in the form of power-ups. We want this mode available to anyone wanting to learn the classes in a fast-paced high-action environment, and we hope power-ups will spice up this mode enough to make it a good introduction to Grimoire PvP. 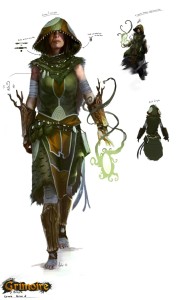 Keeping it Classy
At release Grimoire: Manastorm will feature 6 playable classes. They are Ice, Fire, Lightning, Earth, Life (Nature), and Nether. We have extensive designs for additional classes, but if added to the game, they will likely be DLC.

The decision to reduce the number of launch classes from six to ten was an easy one. It would be fun to say we agonized over it and had to make a tough call but we didn’t, and it wasn’t. We can give our six existing classes new character models, new animations, as well as deep spell customization at the cost of doing fewer classes for launch– it was an obvious choice.

So what’s in store for our existing classes? For starters Nether is getting a new passive, Earth is getting a new Utility (Q is default bind) spell, Nature is getting the ability to spawn health-pickups, and every class will be receiving balance changes and bug fixes. Further along in the roadmap the Rune system will detail how you can customize every spell to your liking. We’re ready to start polishing each Wizard until their aesthetic and gameplay roles shine.

Stats, Achievements, and Progression
We’re fully integrated with the steam platform, and that means stat tracking, achievements, and a brand new progression system are all on the way. For Grimoire: Manastorm stats and achievements are the foundation of a progression system that will allow you to level up each class. As a class gains levels rewards will be unlocked. While some of these rewards will be cosmetic, others will affect gameplay. However, we believe it is crucial to maintain an even playing field so high level players will not be simply ‘more powerful’ than new players.

Stats are going to be as extensive as we can make them. We want you to know everything from how much damage you’ve dealt with fireballs to what the most people you’ve ever killed with a meteor storm is. Stats aren’t just going to be your win and loss ratios, they are going to be a detailed look at the spells you are most effective with and where you have the most room for improvement.

Achievements build on the foundation laid by stats and will offer a variety class-specific accomplishments. Earning achievements for each class isn’t just for bragging rights- they are essentially mini-quests scattered throughout the game that will level you up!

The progression that builds off stats and achievements will add cosmetic flare for you to show to friends, but more importantly it will offer you more choices with Grimoire’s Rune System. More on that in Part 2 of our roadmap.