An update on the progress that's been made on Grimm, the standalone, the SDK and more... 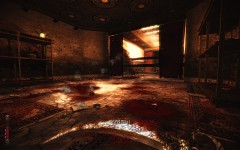 Thanks for stopping by!
Some major steps have been made towards going standalone in the last week or so. I've been going over the code and have been ironing out the last assets to replace. There's still some work to be done there in terms of the animation department. There are two major enemies that need to be re-rigged and reanimated because they make use of Vanilla Doom3 animations. After that is finished there are no ties whatsoever any more to Doom 3. Normally I don't do changelist updates in newsitems, but because so much has been done, and because I want to share with you some of the progress that has been made, I've made an exception this once. Not sure when the next release will be, I'm planning for it to happen soon though, so stay tuned for news updates and more right here on Moddb! 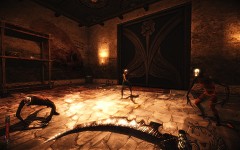 Changes since the last major release:
- Increased entity limit
- Made several performance enhancements in the gamecode
- Moved breakables system to game code
- Implemented truly integrated skill settings for the world (traps) and combat (enemies) so players can now play Grimm in their own style.
- Skill levels were balanced further since last time, the elite Ventril is now a bit easier to kill
- Added new weapon: Cannon. Primary fire: a single cannonball with destructive power that bounces around. Alt fire: 6 small cannonballs with similar power in a large spread to quickly thin out enemy ranks.
- Moved clutter system to game code, increasing performance.
- Moved breakables system to game code.
- Removed all script hacks to add new CVars and moved all of them to proper implementations in gamecode.
- Made all traps solid for players
- trigger_hurt entity now can have damage defs set per entity type it touches
- Added several visual effects to item pickups
- Added screenflash to item pickups (configurable from the options menu)
- Added alternative attacks to all Scythe weapons, primary works the same as always (hold to charge the power, release at the right moment for a greatly charged attack). Alternative power: Repeat alternative attack at the right moment to gain power. When the powerbar is full (after 5 succesfull hits) use the primary fire for a charged attack that kills anything in the room. Difficult but very rewarding.
- Added new gameplay bonuses: 'Impressive' after 3 kills (or more) in a row, several shortcut paths and secret routes.
- Completely finished 6 maps, including lighting, detail and clip brushes.
- Made all breakables and gibs lifetime configurable from the options menu (g_gibslifetime, g_breakableslifetime).
- Remodelled and reanimated the Scythe weapons from scratch.
- Added a true checkpoint/autosave system (configurable from the options menu)
- Much... much... more...

Make sure to check out the latest gameplay video to these changes in action!

As always I update the image section 2-3 times per month so check it out!
(And.. don't forget to comment, I appreciate it a lot!)

Looks good... You should really try to greenlight this game. It Would let alot more people enjoy it and should get you the monies :D

Yes Greenlight will definitely be the way to go!
But when it's finished... I wouldn't want to have a half-finished product greenlighted. :)

holy **** , awesome sauce bro , thanks for taking some of my feedback into consideration exspecially the standalone approach as hexen edge of chaos and the dark mod is going too

p.s> yes when its finished , ill wait as long as it takes ,take your time no need to rush, polish the hell out of it , keep up the epic work