A new version of Grim Legions has been released, with a bunch of bug fixes, a few tweaks, and a new tileset.

It's definitely been a fun couple of weeks having feedback on the game after the first open beta release. It's mostly been positive too, which is always nice :)

So we've now made our second release, which is available on the website: Grim-legions.zeefin.net

There were a few suggestions and bug reports... we've squashed a few nasty bugs, and taken up some of the suggestions, e.g.

There was also a bug we managed to track down right before we finalized the release, which meant phantom legions could sometimes appear... was about 3 hours of solid debugging trying to track that one down just before we wrapped up the release!

We've also added a new desert tileset (and updated the existing one). 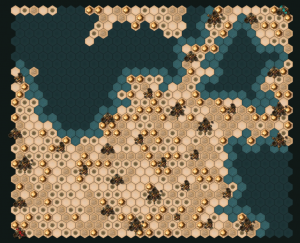 There should be at least one more release before 1.0. One of the major things still left to add is map reveal / fog of war.

Comments and suggestions welcome - either post here, or on our forum.