I've made some changes to make the game feel more alive and vibrant. There is also a new minigame to show off.

Posted by ImperialPenguin on May 4th, 2017

I wanted to add a lot more life to the existing games before moving on to new ones. I'll try to get a video done eventually, but for now some pictures and text will have to do. 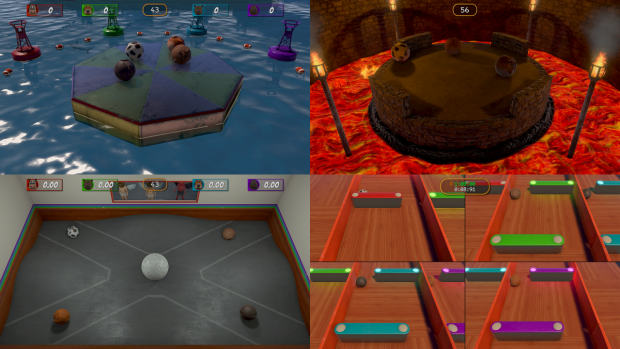 For all of the games where the players are balled up they sort of pulse a little when they roll around, and distort a bit when they get hit so things aren't always so static. I also added the Beautify asset to increase the saturation a bit and hopefully make things a little more colorful.

The UI now has textured backgrounds and Text Mesh Pro. I figured since I can't do the toony art style moving to a less toony interface would be of benefit.

Bumper Balls now has sharks swimming under the platform, and some more floaty things so the scene looks less sparse. There is also a ship in the background that is visible during the intro, and in shadow during the game play. In addition, the animals now unball and come flailing down when they re-enter the scene after being knocked off. I also added splash particles when you hit the water.

Bumper Knockout hasn't changed much. The only real difference here is that now a column of fire shoots up when you fall into the lava, rather than the weird smoke thing that was going on before.

Big Ball Bash now has some new characters looking at the game from a window. They follow the ball as it gets knocked around and cheer or boo as it changes possession. The big ball itself now contorts as it is hit and shoots out confetti when it changes color. The lights also briefly flash the color of the new owner of the ball.

The metal screws on the tops of the Pinball Slalom obstacles are now lights. They'll light up as you pass the blocking obstacles and flash as you hit the bumper objects. The bumper objects also scale up and down quickly when you hit them. When you reach the bottom of the course, the animals unball. 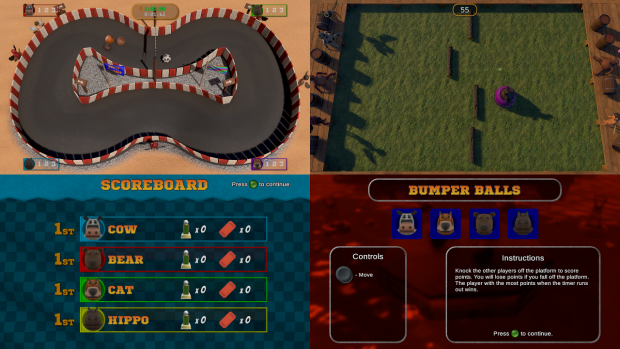 The banner in Roller Derby now waves using cloth physics. There are also waving flags that have been added in. Imps and Cherubs are on the sidelines cheering or booing as players roll past.

Log Stampede also has some Imps and Cherubs watching. In addition, when you are eliminated your player will fall back down and land on the side in a seated position with a dazed animation and star particles over their heads.

The bottom two screens above show Text Mesh Pro and the new textured interface. The scoreboard also now has an animated background instead of the static background from before. 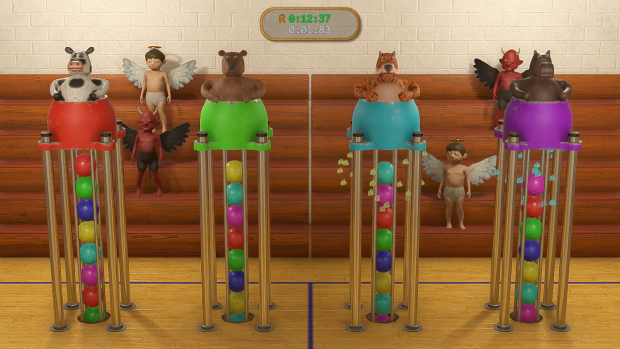 In addition to that, the animals now have names that I'd like feedback on: