To start the catching-up process of updates, a number of new units and new weapons are introduced.

It's been just over a month since the last update, and as I am finding that I prefer to do updates in bunches, I wanted to wait until I had some more substantial progress to show before adding some new news. In this case, there are three new maps that have been added, one new mode, and a number of other smaller updates. Before getting into the bigger stuff over the next few days, I'd like to touch on some of the fun minor updates.

The first update that you may have already noticed (since apparently the mod profile lists itself as "updated" when I make changes to past news articles) is the new branding of Dark Times. There are slight variations (depending on whether the logo is for the project as a whole - "Dark Times" - or the sequel parts being worked on - "Rising Son"), but the gist of the new logo is the Death Star eclipse. I'm not a graphic artist by any stretch of the imagination, but I think the logo design worked pretty well:

While the vast majority of my work recently has been creating and polishing maps to fill out the mod, I've done some smaller intermittent work on new units, if for no other reason than to make distinct the two separate "time periods" that will be randomly selected from at the beginning of each map. As mentioned before, every time a map is loaded, the script will select either a pre-movie time period (the Stormtroopers with blue stripes, Rebels in militia uniforms) or the New Hope-centric time period (Stormtroopers, Rebel troopers). The pre-movie time period was what was originally released with the mod, so all these new units are for the in-movie time period - you'll (hopefully) recognize them from their movie or movie-contemporary sources.

The first new unit is the Rebel Alliance's Rebel Guard. 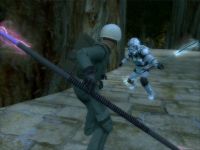 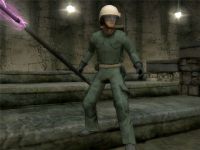 This particular unit you may recognize if you have sharp eyes; it's based off of the honor guard shown at the end of Star Wars in the temple awards ceremony. He carries an electrostaff and a blaster carbine, and he's a substitute for the Duros Mercenary unit.

The second unit is the Empire's Stormtrooper Commander. 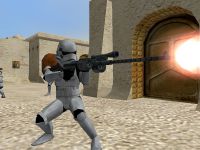 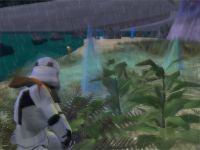 The pre-movie version was equipped with a repeating blaster rifle, a pistol, and a shield generator. This version comes with a heavy blaster, flechette mines, incinerator detonators, and CryoBan detonators. The weapon most unique to this character is the final listed weapon, the CryoBan detonator (as seen above in the second picture). On detonation, this weapon prevents any hit unit from retaliating or escaping (without affecting the original user), allowing you an opening to attack back. The effect is only temporary, though - so make the most of your time!

The final new unit is the Dark Trooper (Phase One). 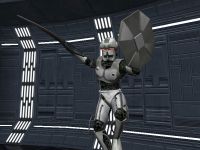 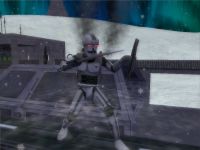 The Dark Trooper name, of course, isn't unique in and of itself - the stock Battlefront game has its own version of the Dark Trooper. This particular unit represents an early stage in the Dark Trooper project, during which the units were completely droids and were only equipped for close-range combat - this may be familiar to anyone who's played through the original Dark Forces game. The Dark Trooper (Phase One) replaces the Heavy Trooper (melee unit) for the in-movie time period.

This Dark Trooper is a particularly unique infantry unit in a couple of ways. Its only true weapon is its vibrosword arm, however, it comes with a couple of (infantry-)unique abilities. Because it has a blast shield equipped as its other arm, it's able to go into a block state similar to the stock Jedi units where it can block incoming fire from the front - however, it is completely immobile while using this, and this will rapidly drain energy. Its other unique ability is its "Impeller Drive" ability, which allows it to perform an attack similar to the Dark Times Jedi's "Force Finishers." Like the Force Finishers, the ability can be activated by attacking three times and then pressing the secondary button - when it's used, it'll create a small vacuum and draw in nearby units to bring them within reach of your vibrosword.

There have also been several mundane updates worth no more than half a sentence - new HUD icons, background model additions to some maps (one of the models can be seen in the second Stormtrooper Commander screenshot above). More exciting (and thorough) updates will be coming in the next few days though, so keep your eyes peeled!

Nice job getting the update up and running Mav!