As the fourth part in our alien "reveals", we give to you, the Gorge!

Concept
The Gorge probably has the most character of any of the aliens and we knew we wanted to preserve is his slightly pitiful, hard-working and heavyset character (never say fat, it's rude). 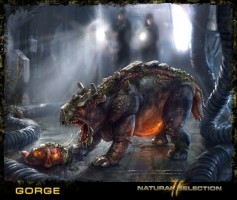 Being the main builder/healer class and without much offensive power, we thought his pudgy visage needn't say "I want to eat you" but instead, "No one appreciates my slime-piles". Hence, the defeated look of his half-closed eyes. His semi-awkward face armor implies that he needs to stay safe more than he needs to attack fast-moving targets and the upturned armor "ears"...well, they're just cute.

His glowing spare tire ties him into the hive somewhat, in that both play a key role in the team's abilities and advancement. Here's the finished model and texture in-game: 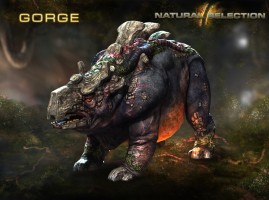 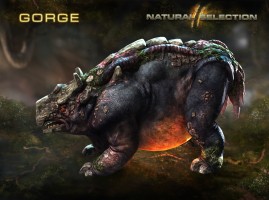 Here's a video showing him in all his swollen glory:


Spit
As in NS1, the Gorge can spit a projectile that does damage to marines and structures. It makes a sizzling sound on enemies and glows, doing damage over time. It also obscures marine players' screens a bit and slows marine movement for a short time. It shows up as a bumpy infestation on its target. Spit alt-fire is a shorter-range, slower speed, more potent version especially suited for structures.

Health Spray
We're keeping the healing spray from NS1 as well. This creates a cloud of healing bacteria that will heal all friendly players and structures within it. Using this he'll be able to keep his teammates and precious structures alive and healthy. The area effect also means he won't have to move his corpulence unnecessarily.

Damage Soak
One new ability we're giving the Gorge is a armored protection ability (name pending). By holding crouch, he can drop his cushy paunch to the ground, extend the armor plates on his back. Doing so will mean that he takes damage off his energy instead of health, as long as he can do so! Energy is like the equivalent of alien ammo, but it never runs out and is always replenishing itself. So if he goes immobile, he can soak quite a bit of damage without getting hurt. At some point though, he'll run out of energy and he'll need to be saved by other players or will need to get up and shuffle away. You can see this ability at 0:32 in the Gorge video.

Geeky gamedom anecdote: if you played the celestial Star Control ][, you'll recognize this ability as similar to Utwig's special ability. We are toying with having the ability give you energy when it soaks damage as well, and reducing energy when using it without actually taking damage. I think it could an interesting Yomi layer.

Chambers
Chambers and how they relate to alien upgrades represent the weightiest change for the Gorge in NS2. Now there is an Alien Commander building technology structures, so Gorge-created structures won't unlock upgrades or abilities for other players. The unctuous chambers that the Gorge spits up will be purely tactical. These include the familiar Defense Chamber (automatically heals players or structures nearby) and the Offense Chamber (a kind of organic turret that shoots spikes, possibly renamed to Spike Plant). His overabundance...of abilities mean we'll probably limit his structures to these two.

One last ability we're considering is one suggested by the community - by holding shift he could Belly Slide along slick or downhill surfaces. Maybe as a quick escape down a ramp or just for fun?

We're hoping that these abilities will make the Gorge a fun class that straddles the line between attacker and defender and gives him lots to do near combat and in alien bases. He'll never be much of an attacker, but this butterball is the team medic and engineer and thus, deserves to be loved (by anything with slime on it at least).

Next up is the Lerk!

Aww man, that thing is so cute, I really wouldn't want to kill it :(

yeah, it actually is... i want one. can they be bought at a pet store?

Yeah but you'd have to feed it some exotic food like panda bears or something.

But then again, that might just be a rumor.

The gorge is crazy hot.

Amazing? I think so. I love the organic look of all the new aliens.

I'm blown away by the consistent yet intriguing look of the aliens as well.

sliding on his belly eh? that could make for interesting attacks. slide into a ramp type thing and shoot acid at marines as you plop down to safety.

Epic game will have to buy.

Oh the Utwig, the emos of Star Control 2.
The Gorge looks amazing, I can't wait!

Yess! The most badass alien of all! :D