We have never previously shared details about exploits, but we feel this one is exceptional in the relative size and scope, and will have had (and will probably continue to have until equilibrium is reached) an impact on market pricing, especially of prestige scrolls. 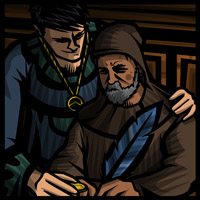 We've just permabanned a number of players for a particularly egregious gold / market exploit.We have never previously shared details about exploits, but we feel this one is exceptional in the relative size and scope, and will have had (and will probably continue to have until equilibrium is reached) an impact on market pricing, especially of prestige scrolls.

Whilst we're not going to name names, we also feel the particular names involved will become quite conspicuous by their absence, especially amongst traders ingame.

So, in this instance we feel it is appropriate to let everyone know roughly what happened and what we've done; if only in a (doubtless somewhat hopeful) attempt to stop the pitchforks being pointed in all directions, as well as to provide an explanation for what will possibly be an unexpected adjustment in the Illyriad market economy.

We don't expect any adjustment to be major - but having said that, we have just removed a little over 11.5% of the current gold supply (closest to M0/MB in economist's terms) and as such we expect that such "quantitative tightening" will have an impact (even though that money was mostly "created via exploit" only very recently).

How did you discover the exploit?
We were preparing a (hopefully) informative post about the scale and growth in the Illyriad economy over the last 4 years, and were also interested in how the daily economy had changed since the introduction of Prestige Scrolls (yes, we do record everything) - and we were looking at the net Gold flow balance in the active player economy.

The net Gold flow balance is the balance between:

When we looked at the report, however, we were a bit stunned to see a huge jump in the net Gold flow balance starting on the 18th of October. 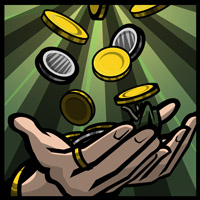 After looking for a few obvious culprits (eg "was there a massive destruction of troops in an alliance-wide military engagement?" etc), we ended up with a blank, and so began eliminating other possibilities one-by-one.

At the very bottom of our pile was tax rate (how could that, even across the entire playerbase, nearly triple the gold flow overnight!)

Imagine our surprise when we discovered a single town, with:

How is this possible?

Not without a deliberate exploit, I'm afraid to say.
What the player did was:

It simply didn't matter that the town was empty except for a couple of dozen people working on farmyards.

How was the exploit closed?
Taxes can now only be set to between 0 and 100%, and we're going to look at other safeguards (eg, we're examining the destruction of towns after a period of time if they have nothing but farmyards and zero storage and negative production, as well as further summaries and internal alerts when some previously un-monitored things go out of expected parameters).

How much money was generated and what happened to it?

Well, luckily we can tell exactly.

The town that was performing the exploit was a member of two fairly prominent alliances (the exploiter had switched recently), and so had not been thieved from. So the only transfer for that town was via direct dispatch.

Tracing the gold outbound from this town, as well as prestige scrolls inbound and outbound from related exploiter account cities, most of the flow was to a different trading town closer to Centrum for market access.

The majority of gold transferred was since the 18th of October, however we can see, by trawling through the logs, a number of earlier transactions of many billions, distributed to players in the alliance, dating back to August and September of this year.

We believe that the player ran the exploit back in August but stopped and reset his tax rate (possibly for fear of discovery); restarted once in September, and then permanently ran the exploit from the 18th of October onwards - once there was a clear reason for large-scale gold fraud (ie Prestige Scrolls).

The total amount drawn and distributed from this exploit was:

What's going to happen to these players?

This figure removed is higher than the amount drawn and distributed because:

What about the other players and the alliance(s) these players were in?

Many of you may have worked out who the players involved probably are, perhaps by their willingness to pay over the odds (for eg prestige scrolls), and some of you may have done business with this player. You'll be glad to know that we hold you blameless; and we believe that you acted in good faith. As we investigated the exploiting account, we noted (very happily) that many of you expressed substantial surprise that a player less than 3 months old could actually drop half a Billion on prestige scrolls.

We would repeat that we do not wish this thread to become a blame game where people make suppositions or accusations about who knew what and when, or cast aspersions on other players or alliances.

We believe we have performed an in-depth investigation into this exploit and those involved in it, and that we have lanced the immediate boil.

We have not yet, however, finished our investigation, and so would urge anyone who received unexpectedly large (hundreds of millions, if not Billions of gold) payments from a less-than-three-month-old player to get in touch with GM Rikoo via igm - or to open a petition with as much of an explanation as possible. We'll be much more charitable if we hear from you first, rather than you hearing from us.

How did you devs not notice this earlier?! 91 billion is a lot of gold!

Well, whilst we record everything, we really don't monitor everything.

The figure that tipped us off to the exploit was the delta on the hourly gold production value - everything else was pretty much within expected market parameters.

It may shock some of you to know that whilst 91 Billion seems like a lot of money, there's actually more than 800 Billion Gold in Gold pieces alone (ie what economists would define as M0 or MB) sloshing around inside the active player Illyriad economy. The total size of the Illyriad economy is many, many Trillions, and when we get this report written up we'll happily share the details with you all.

How is ending this exploit going to effect the market?

We wouldn't want to speculate too far - we'd expect a demand reduction (particularly on prestige scrolls) due to the cartel's willingness to pay over the odds and to warehouse them; although it should be said that most of their transactions were direct player-to-player sales rather than trade hub orders.