Development of v8.0 of the award-winning Deus Ex mod GMDX is progressing exceptionally well, reaching levels of design depth seldom trodden. I estimate it will be ready for release Q4 2015. Here is a look at some of many new features it will feature.

- 32 new empowering perks.
- Features skill requirements; you must first upgrade the respective skill to the corresponding level to be able to purchase the perk.
- Enables new features such as the ability to toggle grenades that explode on contact or timed, and the ability to hack security systems at range with multitools.
- Click the "perks" button from the skills screen.
-More choice, more depth. How will you build your character? 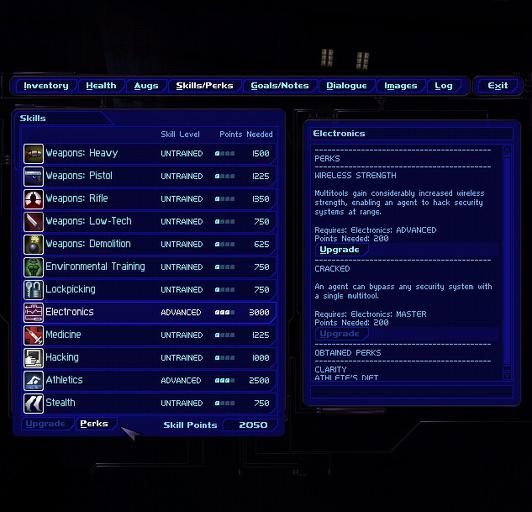 Description: An agent's standing accuracy bonus with pistols is accelerated by 20%.

Description: An agent's vision is not impaired whilst drowning.

Description: Nearby proximity mines emit audible feedback to your infolink, revealing their location.

Description: An agent's stamina regenerates even when crouch-walking.

- Pickups and decorative objects now move when taking damage, meaning explosions send objects flying, hitting objects or shooting them knocks them around.
- Force is transferred when one object hits another.
- AI are knocked back by high-powered weaponry.
- Pool ball physics improved. 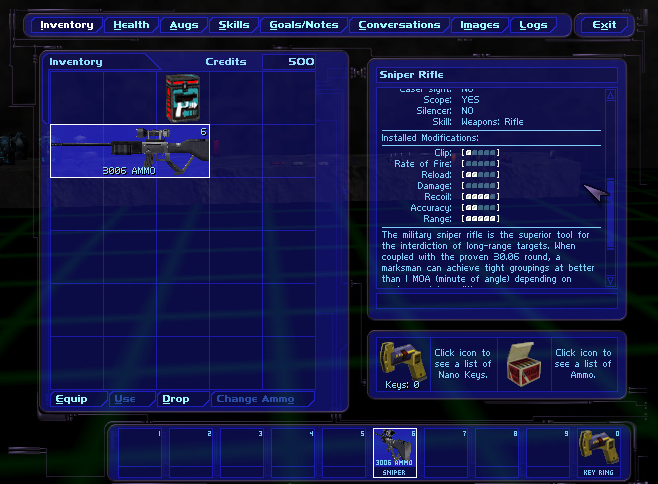 - Bigger & better than before, GMDX expands upon Deus Ex's level design in every respect whilst staying true to the original style.
- Every map has received attention, improving all aspects of gameplay, enhancing level audio design with ambiance and scripted audio, making things look prettier and more detailed, improving mission scripting and adding more noteworthy places to explore.
- The example image you see below is an overhead shot of a beautiful expansion to the Paris Metro HUB map, where on one side of the map you had the hostel, the bakery, the club and such, but on the other side there was very little at all. On this side you'll have to avoid or take out MJ12 troopers on their patrols by sticking to the side alleys or climbing on the roofs, and you'll find a number of interesting areas to explore. 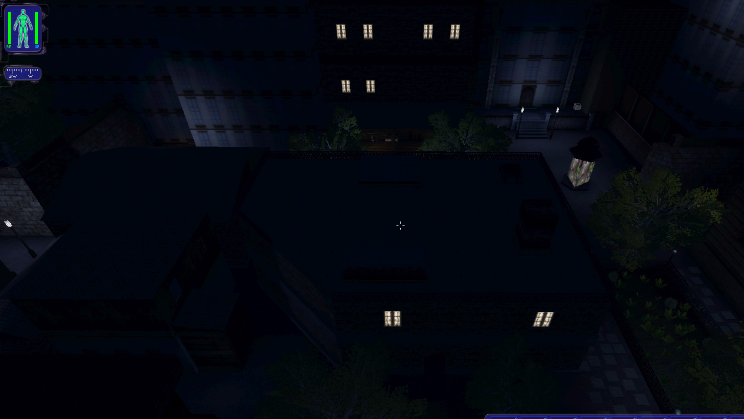 - AI in GMDX v7.0 are polished to a very high standard, but there's always more you can do. So in GMDX v8.0 we have some finishing touches. Examples:

- If an alarm is sounded more enemies are called in (high security areas only).
- Dogs chase and attack the player more effectively, and when they spot you they bark loads and alert nearby AI to your presence. (in other words, they behave closer to real life guard dogs).

- Whilst AI death animation is playing there is no longer invisible collision that blocks bullets and enemy decision-making algorithms.
- A focus on making AI/the game a little easier on lower difficulty levels.
- EMP damage causes an augmented MIB's augmentations to malfunction.
- Yet more appropriate variation in pain, death and knockout sounds.
- Blowing up NPCs doesn't destroy their inventories (Credit: Yuki of Shifter).
- If a military bot stomps over a corpse the corpse will gib.

- Deus Ex at this point in time (GMDX v8.0 milestone) now features over 200 new sounds, resulting in a much-needed audio design overhaul.
- New interactivity sounds, the HUD alerts you audibly when biolectricity is low, an extra focus on level audio design (ambiance, scripted sounds) this time around, plenty new player and AI sounds and much more.

- further gore expansions, such as AI head decapitation, improved blood effects and general polish.
- Many other effects such as augmentation activation effects, weapon and explosion effects, player movement-based effects and of course, much, much more.

That's enough show & tell. The full changelog will be available upon release.

GMDX is shaping up to be a significant achievement in terms of game design, as well as a personal accomplishment. GMDXv8.0 will be the final release of the mod, and additional contributors are sought before that time:

- Heavy-duty testing will be required.
- An animator would be fulfilling as new animations & behavior such as first person takedowns, a greater variation in AI death animations, mantling animations and new anims for the objects that were left behind by Ion Storm.
- Any skill is up for consideration. If you're talented, I'm listening.

Thank you to those that have contributed to GMDX in the past.

Can you improve basketball physics too? I like to toss basketball in Hermanns face.

What specifically did you have in mind?

Some of the perks seem like they could be game-breakers? Mainly the wireless and trap sensors.

When I play on realistic I don't even put the skills to max anymore it makes it so easy :X.. Maybe I've just played through too many times.

GMDX has balance firmly in mind, and has since the beginning. If you want to hack/pick absolutely everything you must upgrade the skill to master (as it should have been vanilla). GMDXv7.0 is available to download, give it a try to understand just how much a mentally-engaging experience means to me, and to prep you for v8.0.

"Some high-level AI use new augmentations, such as a typhoon-like aug,(...)"
I like that, it kind of serves as a link to the new games, and it makes sense, I imagine a lot of the MJ12 soldiers are mech-augs.

I simply cannot wait for the next version.

It is the MiB's that have it. MJ12 troopers have no augmentations and I'm careful not to **** with lore with anything heavy-handed/is not feasible.

I played this mod a little, and I should say it's ******* amazing, man! I have never seen so many features that made the game look like it was meant to be.

CyberP, don't you think that the playthrought has become TOO HARD? I mean, e.g., in the 7th version the enemies can hear on the distance of 1 ******* kilometer how you jumped off from the stairs.

Can you please make something like DISABLING the mod's AI difficulty that you've created? Optional, of course. I (and many of my friends) would prefer to face enemies in your awesome mod with the "eazy" difficulty from the original game than on your updated difficulty.

Yes, enemies hear further when the player is landing from height, although it is just a few meters. Jump off some stairs in real life, the sound made when you hit the floor is pretty damn loud. Stealth skill lvl 1 & silent running aug eliminates this.
Anyway, I've toned down the difficulty (including the range of sound produced when landing from height) based on difficulty level in v8.
Easy should be easy, hardcore should be hardcore. I'll put a little more emphasis on making the difficulty options more representative later, but there's definitely been some focus already in v8.