The world after many years is yet again preparing for next world war, superpower nations are arming their forces to conquer new territories and gain valuable resources. The uprising begins.

It is the year 2030, the Earth's natural resources and minerals are depleting, the effects of Global Warming are becoming evident. Global Economies are beginning to collapse due to the lack of trade, resources and global hostilities. As wars between nations continue we only continue to destroy the Earth. Coal and Oil fuel the War efforts, they are constantly depleting. Already nations wage war to obtain these vital resources.

The United Nations, a once influential organisation that had lost all of its power, originally founded to prevent conflicts between the human race, it had failed to achieve its original goal, and now all that remained of it was the name..... Many countries started to pull out of the United Nations, and then it just disbanded.

The Russian Federation faced another bloody revolution, a communist party successfully seized control of the government, through the use of propaganda and then by staging coup d'état. Many of Russia's generals and military forces turned on their government, believing that they would be forging a new age for Russia, those who resisted were killed. Thousands of lives were lost, even though this significantly reduced the military might of Russia, they would have to re-stabilize their economy and military soon, otherwise they might face an invasion.

The United States of America, once known as the world's most powerful and proud nation, has now been forced to reduce its military might due to the lack of resources it requires to maintain it. The country was forced to look into 'investing' in new allies and soon they found one, Japan, whose economy was still very strong, although in the aftermath of WWII its use of its military but now that could all change. With Japan's money and the USA's military they could once again be a force to be reckoned with and so the Pacific Alliance was formed.

The European Union, made up of the majority of countries in Europe, has become even more influential, many more countries have joined this Union. Soon the boundaries between countries were gone. From then on Europe would be a single nation, the European Union, which would be led by a group of senators. To expand its land the European Union then preceded to annex the countries on the continent of Africa. Without any or little opposition they joined the European Union, forming the EurAfrica Pact. They then saw to the annexation of Canada, a country originally formed by the European Settlements. Now with Canada in their control they could now keep the Pacific Alliance In ‘check’.

China was now suffering from the impacts of overpopulation, the country has now running out of room, so they needed to find a solution in this 'problem'. Of course they immediately looked at the new Russian Republic which had land which was uninhabited in many parts of the country. After the revolution it was short of thousands of soldiers. Soon a union was formed, Red Asia Nations a new nation to be feared. in an act to show its newfound power they began to conquer the rest of mainland Asia.

South America a continent filled which rich fertile land, it’s land would be a vital asset in the years to come. To protect it and to ensure their own survival the nations of South America signed a treaty to form the South American Union.

Now a new faction would enter the stage, a Private Military Corporation known as Universal Defence and Security. They established themselves in the Oceania region occupying Australia and New Zealand through brute force; it is unknown how they gained enough military might to do this. They then annexed the surrounding island countries, such as the Philippines, Papua New Guinea and Indonesia. They also seemed to have amassed a large amount of funds to produce weaponry and fund research for advanced technology.

As these superpowers began to build up their forces, tension began to grow between them, war would soon be inevitable. The UDS had successfully engineered a new source of power known as the Arc Reactor, a very promising and yet experimental power source. Red Asia Nations spies within the UDS then attempted to steal the plans but they were unsuccessful in their attempts and executed on sight. The UDS demanded answers from Red Asia Nations, but they only responded with moving an invasion force into UDS territory, their excuse was killing the spies was an act or war. The UDS immediately retaliated with full force.

As Red Asia Nations and the UDS fought. The Pacific Alliance moved its focus to the Polar Regions, where they would try and attempt to take the oil and coal. This would not go unnoticed by the EAP who had already had a presence in that region, and threatened the PA to move otherwise they would open fire, but of course the PA were looking for a fight now that they had their forces at full strength again. Then the war began between the two. PA began to ‘liberate’ Canada from the EAP, which had been under the control of its ‘motherland’ for some time now but the EAP had already seen this coming beforehand, one of the PA’s most prestigious generals was secretly loyal to the EAP and rebelled against the PA using prototype stealth technology but even with the combined forces of the EAP forces there the PA crushed the EAP turned to a more southern continent....

The SAU remained neutral between this conflict at first until they noticed that the PA was moving their forces into their territory for no apparent reason and when they sent fighters out to see what was happening, they were shot down. They saw this as a clear act or war if the PA wanted to fight a war the SAU would give them one.

The war has started; each faction would stand alone although some factions still remain neutral to each other that would all change soon.

So this is first update with storyline of the Global Uprising. As you can read in description you could expect 5 new factions. U.D.S., newcomers from nowhere. Red Asian Nations, endless masses with chemical and nuclear weapons. Pacific Alliance, abicious and ruthless technologists. EurAfrican Pact, xenophobic specialists in blitz and trench warfare. And South American Union, neutral armies of soldiers and merceneries from Amazon.

But for the start every mod presents some of their work, and GU will not be exception. So lets take a look on them, shall we? 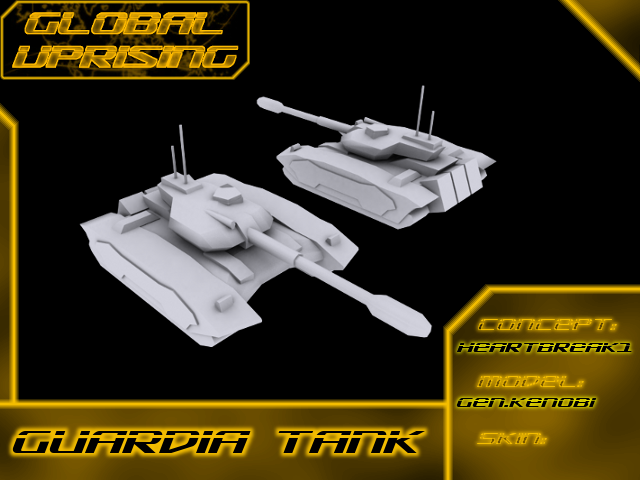 Full Name: Guardia Tank
Role: Main Battle Tank
Description: Since the U.D.S. for the first time appeared, their skilled infantry divisions were supported by these wide tanks. Officers from other nations are saying tanks with design like this cant be much effective, but the opposite is truth. Guardia is very efficient on the battlefield with its proportions giving them a option to easily drive across the rocks, and its massive 134mm gun giving them a ability to precisely hit and destroy the target within range of six kilometers, when favourable conditions occur. 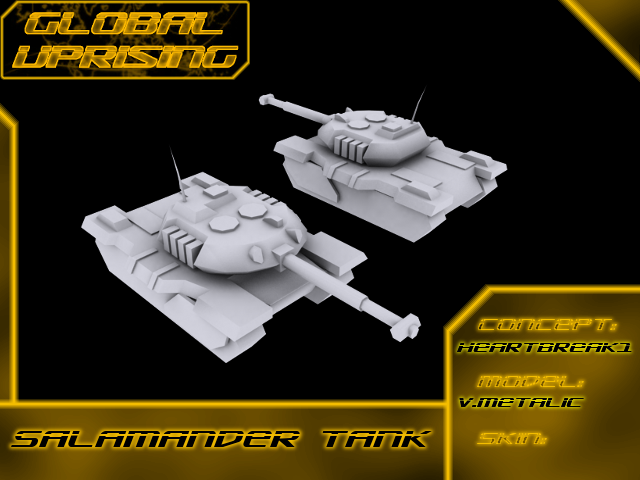 Full Name: T-142 "Salamander"
Role: Main Battle Tank
Description: Collective work of the Russian and Chinese engineers, T-142 Salamander is armoured workhorse of the Red Asian Nations. Easy to manufacture and maintain, Salamander is mass produced and with its 115mm gun everyone, who will dare to stand against it, will dont live long to tell. Rumors are spread that Salamanders have been seen with nuclear reactors, but this havent been confirmed, as there are no survivors. 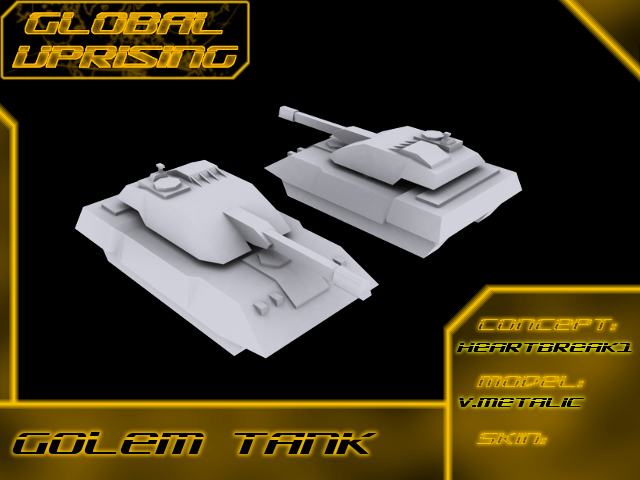 Full Name: M7A1 Golem Tank
Role: Main Battle Tank
Description: Nations of the PA seen in their neighbours' tanks a serious threat, and ordered to make the main battle tank, which will easily overpower other tanks in the world. After failure of M6A1 Gritton, new tank was created. M7A1 Golem. Its boxy design and corrosive-piercing ATGM weaponry makes it the best competitor to other tanks. Golem can mount various upgrades to make it even more efficient, from machine guns to nanite generators.

So these were the main battle tanks of the first three factions, which will be included in 1st release. I hope you liked them and also entire team hopes you will be watching us. :)

Nice story for the mod :D
I'll keep my eyes on this one

The story is awesome and the mod looks promising... keep it coming guys^^!!

Ill be tracking u;)