Ive finished the glaive model which is the first of the "special" weapons in the game.

Firstly let me explain how the weapons will work in this mod.
Each level will have several puzzle/challenges, some involving cryptic clues and some involving battles with vehicles.
The reward for each one will be a special weapon.
These weapons should be well known as they have featured in other games as well.
(I thought it would be fun to have a few of these well known weapons in the game.)
As you can see the first special weapon is the Glaive from dark sector.
I will try and get soem videos up of the pistol and of the glaive in action.

Well, here's the glaive model. It's made for throwing at enemies and it also instagibs opponents.
What do you think of it? 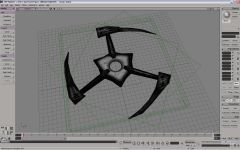