We are about a month away from taking the next step with Desura and accepting more beta invites, read on to see what we have been up to.

In case you missed the update posted a few weeks back, we are getting ready to take the next step with Desura (expect it to occur early August) and have been making great progress. Here is what we have been up to:

The previous update detailed our release and purchase system, which is implemented and ready to go. Read that post for full details on how we plan to handle multiple releases (demos, standard editions, special editions etc) and also how our purchase process works (quick and versatile).

For gamers, our gifting system is powerful and easy. Gift multiple games to multiple people in one purchase, or perhaps buy games now and send out the gifts later. For developers, we have created an invite system that you can use to generate game keys (or load your own in bulk). You can then send these out to whoever you want i.e. testers, press, developers, competition winners, existing customers etc. You can also add beta / test versions of your game and make the release invite only, then pick and choose who gets to participate in the test using the invite system.

Apart from a few, gamers love special effects and great design - so our focus on the app side has been to make it look and feel like a gamer's app should. It is getting there, and is easily customizable due to us using webkit to present as much content as possible. 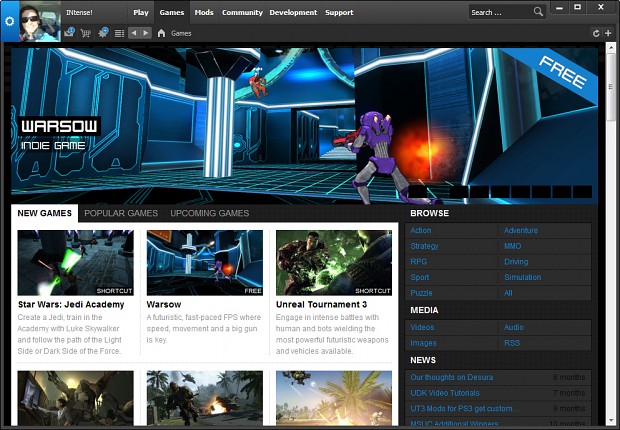 Our other focus with the app is usability and stability. We want everything to happen as quickly, easily, smoothly and bug free as possible, with the least amount of clicks required. So that means refining the base code and making sure games and mods install and play on every Windows PC (other OS's later) no matter how your computer is configured. This is an ongoing challenge.

Developers, unlike other digital distribution platforms where you have little control over the publishing process - on Desura we have created an 8 step control panel for you. Using this control panel you are in charge of your game or mods release and can control what gamers see, who can play your releases and when they are released + hundreds of other things. Share content when and how you want it.

Over the next 4 weeks, our focus is on releasing the first version of the API, implementing a detailed stats package (to track purchases, players etc), stabilizing the app, finalizing the payment process, adding new games / mods and getting ready to open the beta to more people. The Overwatch mod team has also kindly volunteered to test out many of these features so thanks for being our guinea pig! Gamers and developers if you want to find out more and get access, please get in touch.

Thanks for your support so far, we still have a long way to go (i.e. the next version will be missing many major features like in-game integration, chat, show who's playing what game etc) but we are pretty sure you will like what you see. We also have a job opening for a gun web developer (LAMP stack) so if that is you, apply away!

Quote: ((beta keys, etc)) "You can then send these out to whoever you want i.e. testers, press, developers, competition winners, existing customers etc. You can also add beta / test versions of your game and make the release invite only, then pick and choose who gets to participate in the test using the invite system."

Awesome, this is really good stuff :)

I don't believe that Desura intends to venture too far into Steam's territory - the primary focus is upon mod & indie game distribution and sales, rather than large titles.

Not to say that it couldn't, of course.

We plan on selling all games, triple-a to indies and mods. However our focus is on perfecting the product and beginning with the indie teams. No point biting off more than we can chew

This is looking better all the time!

Thanks for the comments. We are a long way off complete so please don't set your expectations too high and expect that it will get better and better over the next 12 months.

Plenty of work and key features to be done.

That LAMP stack job thing, is that like building web servers with Linux and Apache, isn't it like a software bundle or something?

Oh wait sorry, maybe I should have read the job ad first :P

So essentially you need to know PHP and database to do this job. Apache / Linux is not required as the server admin takes care of that.

Oh yeah, that makes sense, I have used WAMP and XAMPP before,

I only started learning/playing around with PHP last month, and can only make databases with phpmyadmin, I'm fluent in html, an know a bit of CSS,

It's a shame cos I would have liked to do a job like that, but I haven't got the skill :(

I got beta for this it's really good. We will be hoping to sell on Desura once we get game all ready to go.

It's okay to look on the fancy side of apps but don't forget to make it first running great and then look for the fancyness. Will it be possible to disable WebKit? It runs very slow, like taking up at times multiple seconds to switch from one tab to the other or displaying/scrolling and rendering fails at time requiring you to switch tabs to get a GUI refresh.

This looks really promising. Glad there is a possible rival for steam.

"We also have a job opening for a gun web developer"
That looks like an awesome job. Too bad I just don't quite fit the bill =(

That developer job - Is there any restriction on location (I'm in the UK but could work remotely), and what's the closing date for applications?

I'm finishing up building the latest incarnation of my own website at the moment, which seems to use all of the skills required and it seems like a dream job!

I can only hope there will be a CLI client like valve Steam for linux which is used to install it's dedicated servers.

Can't be long now. I particularly like the multiple games/user purchase on one transaction sitting setup as your competitor's system sets off warning bells in my card company's office.

The new update out yet?

I want to beta-test desura. Can I?