Ghuls have taken over my News Station with their basic language and I've expanded the World Map!

"We have been taken over by Ghuls, Where they have forced me to read this news in the Ghul Language.
I have expanded the current MyWorld world map and made it-."

Anyway. MyWorld news for today, is that I've made two advances. One, I have expanded the World Map to suit the game better, as well as completed the basics of two languages... As you may have noticed. 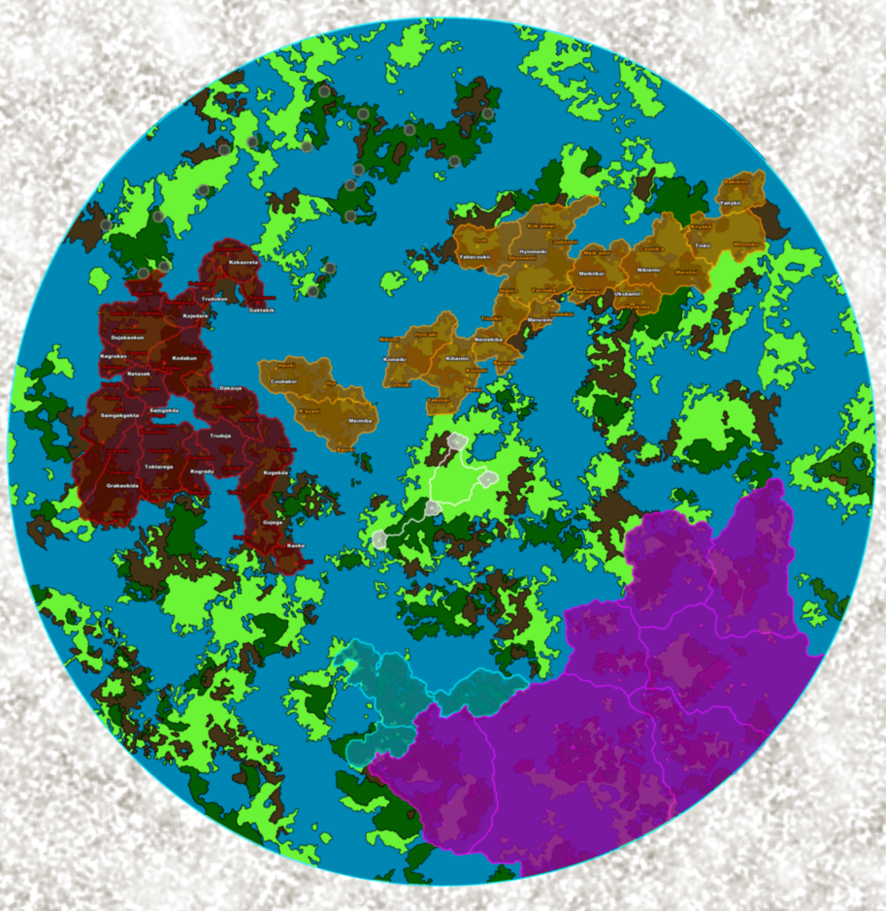 Tadaa! And now to explain the design... which isn't quite finished yet.

Nethertheless, in the center of the map is a giant volcano, thing.
So-so many centuries ago, magicians gathered and created a generator that feeds on the magical output from the magma, to create a shield that would save a portion of their failing planet - outside of the shield is now endless ice and blizzard.

Now, this is just the base idea, but I'm suspecting some sort of magical experiment gone wrong would of caused this freeze-over.

As for the big question: Why? Well, why else would players not be able to go beyond the boundaries? mountain, forest and sea that aren't passable? That's not going to work - players can fly, for one thing - and I definetly don't want to be walking along and bump into air and have it say "You can't go this way."

As for the languages, if you check the To Do List, you'll see that the Ghul and Neonni have been finished. Here are a few sentences spoken in both languages and a rough translation:

To say the least, I think Ghul is the easiest of the two to speak. Whilst the Ghulish language relies heavily on blunt letter-sounds like "k", "g" and "r". A ghulish word often uses one, maybe two, tongue actions at once.
The Neonni language is very smooth and tongue-slippery, relying more on complex tongue-movements such as pauses, clicks and letters and slip between each others, like "s" to "r". A Neonni word often uses more than one tongue action at once.

The new languages are cool, but would it not be better to keep them short if people are going to have to communicate with them? Also will there be an ingame multi-language dictionary?

People can talk in English in-game.

In the menu, there is a "Languages" section. It's basically a list with sublists of words and then empty boxes for translations. You speak to someone with empty boxes, you can't understand them. If you type in one randomly you'll get a big X saying it's wrong, until you type in the right translation.
Obviously when you start the game, depending on how you grew up is how many words you know. You'll know pretty much all of them, except the advanced or irregular ones to your environment... For example, if you have never been introduced to war or education, you don't know what the word for War is.

None of this applies with players, though, only NPC conversations... I hope I got my answer across :D

So you created that magical shield just because you didn't want invisible walls or because of the story too.If only because of the first one, you could make the whole map a globe, so player can't "get out".

But then that limits expansion in the future ;).

I'd like, in the future, for several more shields to be "created" on the edges so that the game area can expand - maybe even leading to the discovery of other races around the world who did not survive the cataclysm.

Woah, that would be awesome.Also this shield makes much more sense, than most borders in other rpgs. I'm really looking forward to it. now, if you don't mind, i'm going to shut down my personal shield and hibernate myself until the game is out.(Or maybe i'll just wait painfully)

I'd prefer if you waited patiently. Your worships empower me - the pain moreso. Bwuhaha...