Getting ready for Christmas we are launching a graphic campaign for social media promoting the new release of Gaucho Snake. We have migrated it to a new GUI, adding better graphic effects and improving the performance of the game.

A new GUI was implemented which let us get much more flexibility on graphics and helps to get the best performance regarding to the hardware.

For this reason, and in order to end of the year with a better number of users (actually we have more than 1300 downloads in Google Play) we are launching some Christmas graphs that we want to share with the SlideDB community. 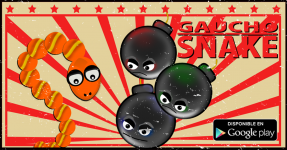