Take a closer look at mini-games in "Melancholy.Hope", comes with examples, tech demo screenshots, schemes, and of course some info.

Mini-games in "Melacholy.Hope" serve as a representation of Jorgen's psychologicaln reflection to the events that happen in the game. They could show things from simple scenes brought by imagination while daydreaming to complicated images of emotional or logical analysis. So let's take a look at the examples, one game that serves as introduction for mini-games creation mechanics, and one from a mid-section of
the game that is built around process of overcoming your fear.

This one happens in the morning when Donut caught a huge bug who he believed to be prince of all tasty things in the world, because he just could eat them all with his massive jaw. So Donut baked a cake using trashy ingredients for it (cake was not to be eaten), and sat down to wait for Jorgen. When characters have met Donut asked to close the doors, and put the bug into the cake through the special hole in it, then covered the exit with cream. Kids sat down to watch how bug would take his throne, but there wasn't much to look at, so we move to Jorgen's imagination.

With the game field all set up, we need to eat all the candies in the level to proceed to the next one. 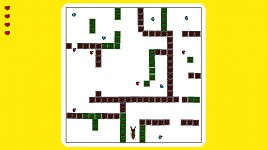 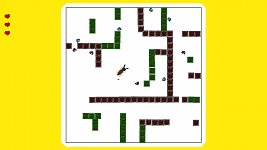 After finishing all levels we get to see the bug taking his throne, but by that time Donut will get bored, and start digging up the cake to find the bug, who has already suffocated in the first minutes. Kids take a short look at his body, and decide to move on to more interesting activites.

There would be no story behind that one, because it could be a spoiler for the main story, but still, we all felt fear, and at least once tried to overcome it. So lets move to the game itself.

In this one we control Jorgen who is wielding a spear in one hand and the torch in another one. The levels are completely dark, and are built around four pillars. Our character is constantly haunted by the fear (big black creature who produces ambient sounds, and his minions of Doubt). The pillars in the level have torches which you can lit with the one you carry, by doing this you would create a light spot, where fear can't enter but his minions would still try extuingish the light (you can kill them with your spear), and will also bring up a logical statement in which Jorgen is confident, like "I want to get rid of that feeling". 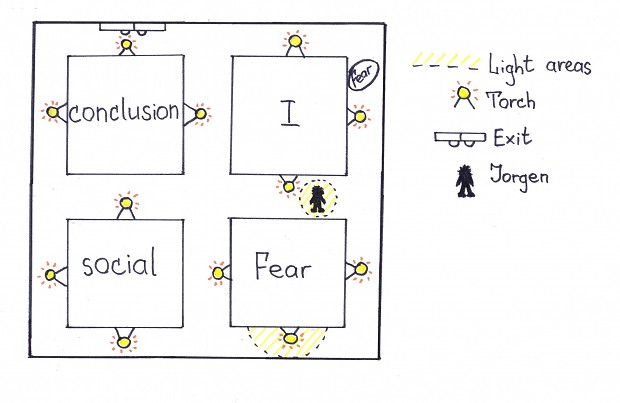 Game rules are defined by the next statements:

- "Fighting your fear is about building confidence in something much more significant than this feeling" - In order to proceed to the next stage you have to lit at least one torch on every pillar. There are four categories of statements, depending on which pillar they are placed on. So as the result you would have something like "I want to get rid of this feeling" ," Fear is smaller than I belive it is", " How could one love a coward?", and "What your life would become if you would fall into this?".

- "You can't run away from your fear" - Fear would send his minions to the torches that are closest to the player, so you can defend them. Running to far away from him would result in extinguishing the torches closest to the fear's position, so you would have to redo all the work you've done before. There is a mini-map to help you track your enemy's position, but still he would disappear from it, if you get too far, or just for some time after teleporting in order to get you from a different location.

- "Facing your fear head on, without having a strength to do it, would result in a terrible failure" - Running into fear in the dark areas would give it the opportunity to extinguish your torch, and then consume you.

After igniting required torches, there would be no more minions, and you have to walk through the opened door. Behind that boss fight scene awaits. 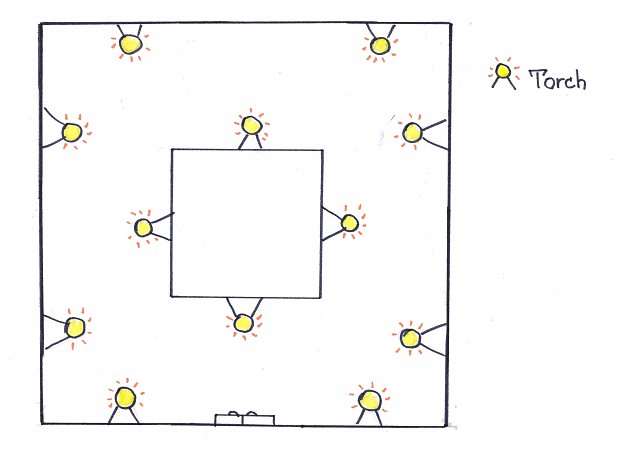 Here we have 12 torches placed in patterns by their statements that are not so gameplay relevant, there are no minions, and Fear could walk through the light areas and by doing this he will extinguish it. What we have to do is to keep two torches lit, and then light one more, it would burn with different color, red for example, and we must lure Fear into its light area in order to damage him. After that room goes dark again, you have to repeat the previous step a few times, then depending on which category statements were used before, you get to the next stage. For example, when you use mostly statements from “fear” category, all the torches get lit, music changes, Jorgen shouts: “I know your weakness”, Fear charges at him, you should dodge and pierce back, after doing enough damage Fear would run away humiliated to the deepest corners of your mind, never meant to return again. That’s it Jorgen wins.