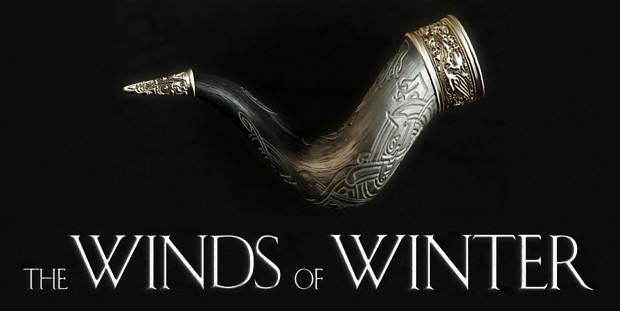 Game of Thrones: The Winds of Winter, a sub-submod of GoT:TW 4.5 - which in turn is a submod for Westeros Total War 0.54.

Download Version 1.3. 1.1 was bugged and had to be replaced.

-Made Dragonstone Swordsmen recruit-able with just a castle, your previously had to have a citadel, which made them only available later in the game
-Added some descriptions for a few units, which previously only had placeholders.

Now that I've got the basic scripting down, I can start adding in some scripts. Hopefully, by the time of the update, I'll have the following:

-Lannister-Frey attack on Moat Cailin. While this never happened in the show (the Boltons took it, but since they're dealing with Stannis they won't get many opportunities to do so), it will add more challenge to the Greyjoys, who are currently a bit too easy.

-Lannister reinforcements to help the Boltons hold onto the North. I've found that without help, the Boltons can be destroyed incredibly fast playing as either the Greyjoys or Stannis, so it would make sense to give them a bit of assistance.

-Justin Massey's sellsword army spawns as a Stannis army near the Dreadfort.
-Before Massey spawns, the Lannisters will send two waves of reinforcements to help the Boltons. While not accurate of the show, it does help to balance things out so that the Boltons aren't annihilated within the first 20 turns.

Removed the AI money script. Basically, this script made it to where the AI would receive a few thousand gold every turn if their treasury was under 50000, or if they were in debt. This got to be irritating and highly unbalanced, since the AI could produce massive armies with practically no upkeep while the player usually starts out with a failing economy. Hopefully, this'll make the campaign much fairer, and make decisive battles actually count for something.

"So, after roughly a month of work on my behalf, Mr_Nygren's, and VltimaRatio's, this sub-submod is done. At least, the first version. Basically, this mod combines the Korpskog "Winds of Winter" submod for Westeros: Total War, and the Game of Thrones: Total War submod. Thus, new units, new characters, new strat-models, changes to the strat-map, new factions, etc., all to fit the Winds of Winter setting, but maintain the feel of the show. The timeline is about season 5 of the show, and the very end of A Dance With Dragons.

Setting:
With the deaths of Robb Stark, Renly Baratheon, Balon Greyjoy, and Joffrey "Baratheon", Westeros has finally achieved relative peace. The Freys now rule over the Riverlands in place of the Tullys, the Boltons rule the North rather than the Starks, and the country is finally brought back under the king's peace. Yet war is not yet done. Stannis Baratheon, though defeated at the Blackwater, continues his campaign to claim the Iron Throne, and now battles the Boltons in the North, hoping to restore the Starks to their seat of Winterfell.

Meanwhile, war continues raging in the Riverlands, as the Brotherhood Without Banners opposes Frey and Lannister rule, and numerous revolts have sprung up by Tully loyalists, most notably Brynden Tully, the Blackfish. And peace in the South will only remain so long as the shaky alliance with House Tyrell holds. And if House Martell decides to make any moves, war will certainly break out once again."

In the Vale - Petyr Baelish has maneuvred his way into power as well - being cunning enough to be able to manipulate the young boy-lord Robbyn Arryn (Robert). Petyr's ambitions might not stop in the Vale and might get him into conflict with the other houses - especially since he has Sansa Stark, who hides under a new name, secretly hiden in the Arryn vale. As she is blamed for the death of King Joffrey who was poisioned at his wedding - this might get the Arryns into conflict with the Lannisters and their allies. Petyr Baelish have to use all of his cunning to get out on top of the coming conflicts, and he might want to aid Stannis in his war against the Boltons to take revenge for the death of Cathelyn Stark - who were killed at the red wedding by the Boltons and Freys. 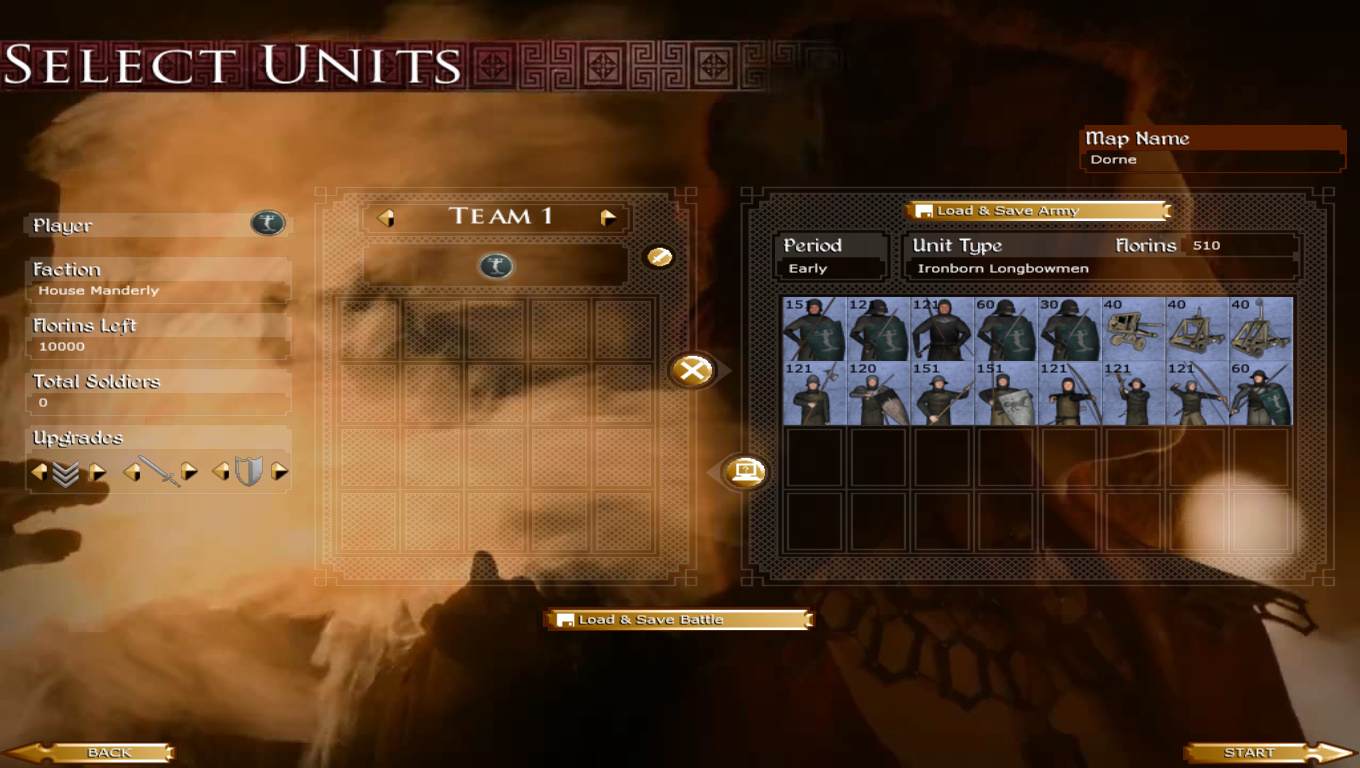 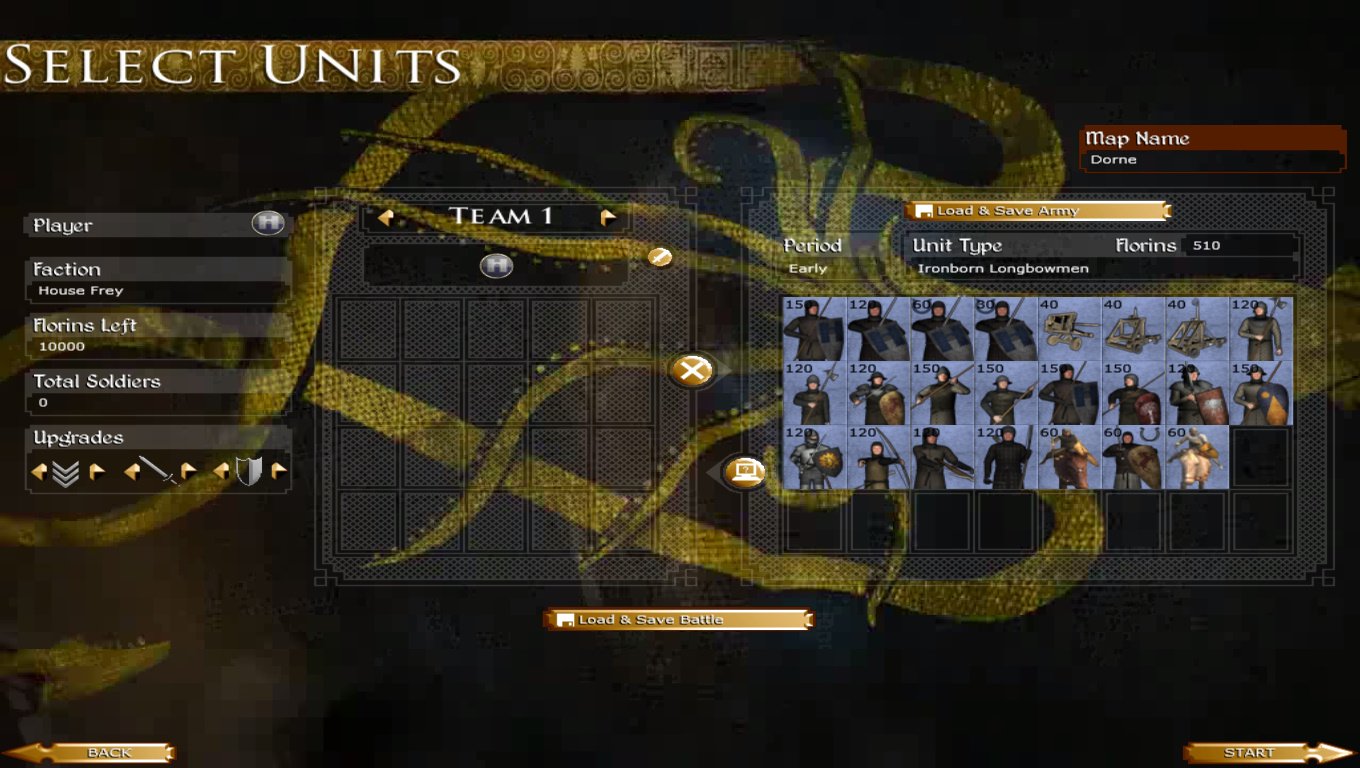 Many changes to the Strat map to fit the Winds of Winter setting - such as moved starting regions, characters etc. 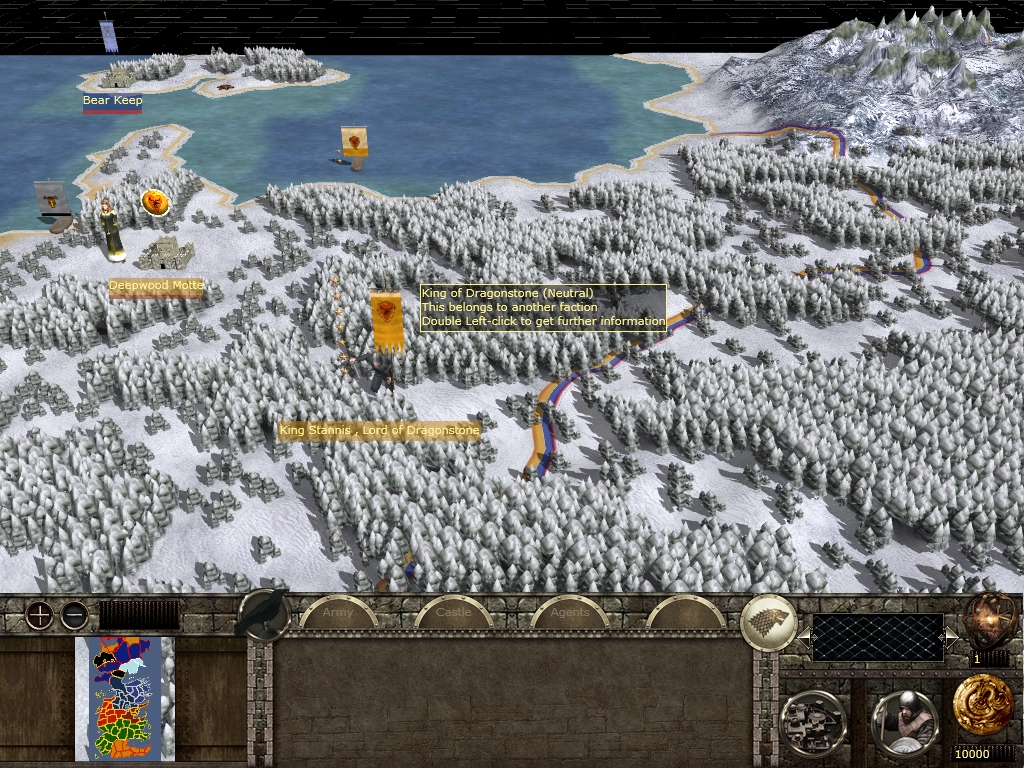 New Bolton banner carriers implemented to 4.6 in may.

New strat-models implemented for all the factions, made in january. 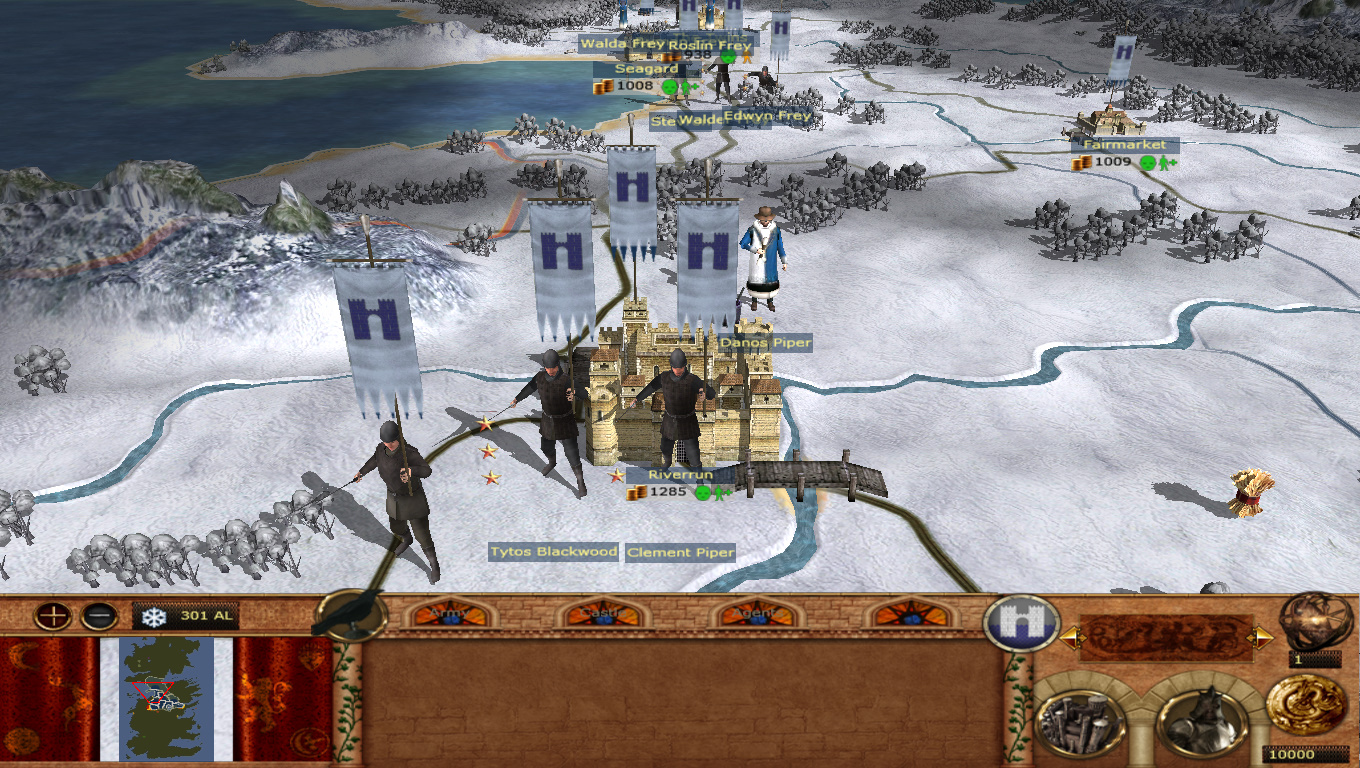 New portraits implemented for all the family members, generals, heroes and generic ditos,

- It's a great improvement compared to the decembre release - and will be better for awhile!

New titles for faction leaders (Such as King of Dragonstone, for House Stannis).

Change in scripting to fit the setting - changed the weather in the script to start in winter instead of summer, removed the Kingship scripts, added Jon Snow (Stark) in as a unique character for Stannis (with Night's Watch bodyguard and Wildling spearmen/Axemen units),

New banners in battle and on the strat-map for House Frey and House Manderly.