Elessar HS on Discord wanted to join me in developing this mod- and I've been kind of tired on modding since i finished the Hyrule update on december 18, only working some on the Warcraft mod since then. I sent him the mod, after he previewed new stuff that he had prepared for this mod and Fire and Blood- such as new ancillary art, new faction symbols for all the factions of Fire & Blood etc.

Since the release of version 5.0 on the fourth of october, the following has been done:

1. Peaman has implemented SGI's map to Game of Thrones Enhanced. He sent me this version of the mod in october.

3. Peaman did add all the buildings, and the rest he left for me to do.

4. I've spent two days and nights now (not counting the time i've been sleeping) working on getting the mod back to a playable state. Files needing work were the descr_strat, the descr_regions (all the hidden resources connected to the recruitment, the settlement loyalties deciding what rebels will spawn when a city revolts, the rebel entries under each settlement), the descr_win_conditions etc -it all had to be re-worked to the same state as the old version. I'm not finished with everything but there were quite the amount of work needing to be done just to get the mod to a playable state like in the old version.

5. Fortunately enough the BMDB, the EDU, the EDB, the descr_script-file, the descr_rebel_factions-file etc are already done since before. So the rebels and units are all ready, i just need to put them back on the map and of course place out all the hidden resources instructing the game to make units recruitable from certain places only.

6. The fact that we replaced the old map has solved the old CTD-issue with needing to play a battle before starting the campaign. This issue is gone. I haven't fought any battles in the campaign yet so i don't know how stable the mod is during the battles - or after battles.

7. I've managed to re-add all the factions seen in the released version with all their old family members etc. It didn't work to simply copy the entries, as i needed to add new coordinates for the new map - or it would not start. I've also added more family members after looking at many different Game of Thrones-mods. So House Stark has more starting generals now. I'm going to continue with adding more to the others as well.

8. The Nights Watch has been properly implemented to the mod in the campaign. The recruitment isn't done yet but they do have all their starting areas, their family members/generals and their alliances. The goals haven't been added yet for any faction.

GoT Enhanced will be different in the sense it is only set in WoFK- and using different scripts/features unless Peaman decides to use them as well.

The mod crashed at various stages as the AI - like on turn 59, 79 etc but would play long after each restart. After i changed some ownerships in the descr_regions-file to make Stannis have cities loyal to him instead of to the Night's watch faction, and the Nights Watch have their castle's and towns loyal to them, and not House Stark - the game got more stable!

Maybe it's luck? But it is still going and hasn't crashed.. I've been letting the AI play for probably two hours or something. The turns are extremely fast due to no faction being able to recruit anything but ships and mercenaries. The starting armies are there but nothing is recruitable after from the main rosters. The regions all have Westerland rebels currently. I do hope the mod will stay as stable as it is now even after adding the rest of the recruitment, the rebels- and the victory conditions. It's on turn 2000 soon.

I do plan to add House Targaryen and the Wildings to the campaign, and the Wildlings will get Mammoths and Giants as well. I still haven't decided from where? The Warcraft Mammoths doesn't look right, the BotET ones would be perfect (used in the German mod as well) but i don't have permission -no one has permission to use those. There are also the ones in "A Song of Ice and Fire" but they are more like elephants with a new skin. Hm, Elder Scrolls also have Mammoths that do look better than the ones in Warcraft etc. We'll see what i will use in the end. The Giants too is a big questionmark.

Then i want to add "The Others" to the mod with the same units as in Fire and Blood". Possibly the "Free Cities of Braavos" as Daenarys will need an enemy in Essos before reaching Westeros. All of the "Free Cities" are in the mod, as well as the Dothraki capital (where Dany will start). Dany is going to have large forces from the start as they will lack settlements compared to the Free Cities. The Others will replace the Dothraki faction for the Mongols-slot. They will be able to spawn during the late campaign. I do also intend to make Aegon a possible spawning faction using the unused Timurid slot.

But we'll see about all of this. All i can say right now is that i'm not finished yet with making it fully playable, but the mod seems to go on forever without a CTD on the campaign map at least. As of writing this it's now on turn 2161.

Btw, there are textures from 2017 that will enable me to add the rest of the planed minor house units for the old factions as well.

VltimaRatio didn't send me his new models from this summer, but he told me he were working on a AopK version of his own. 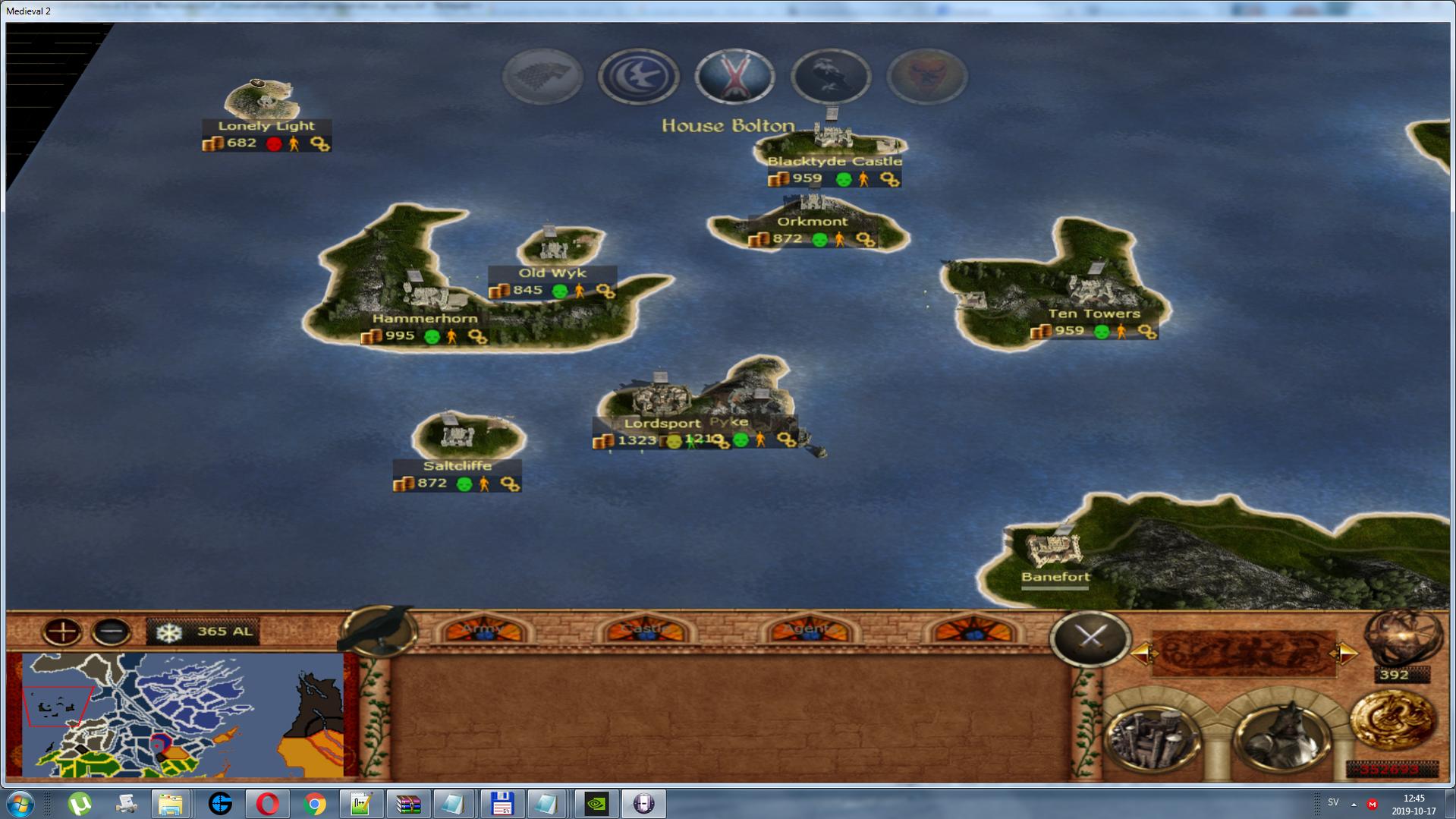 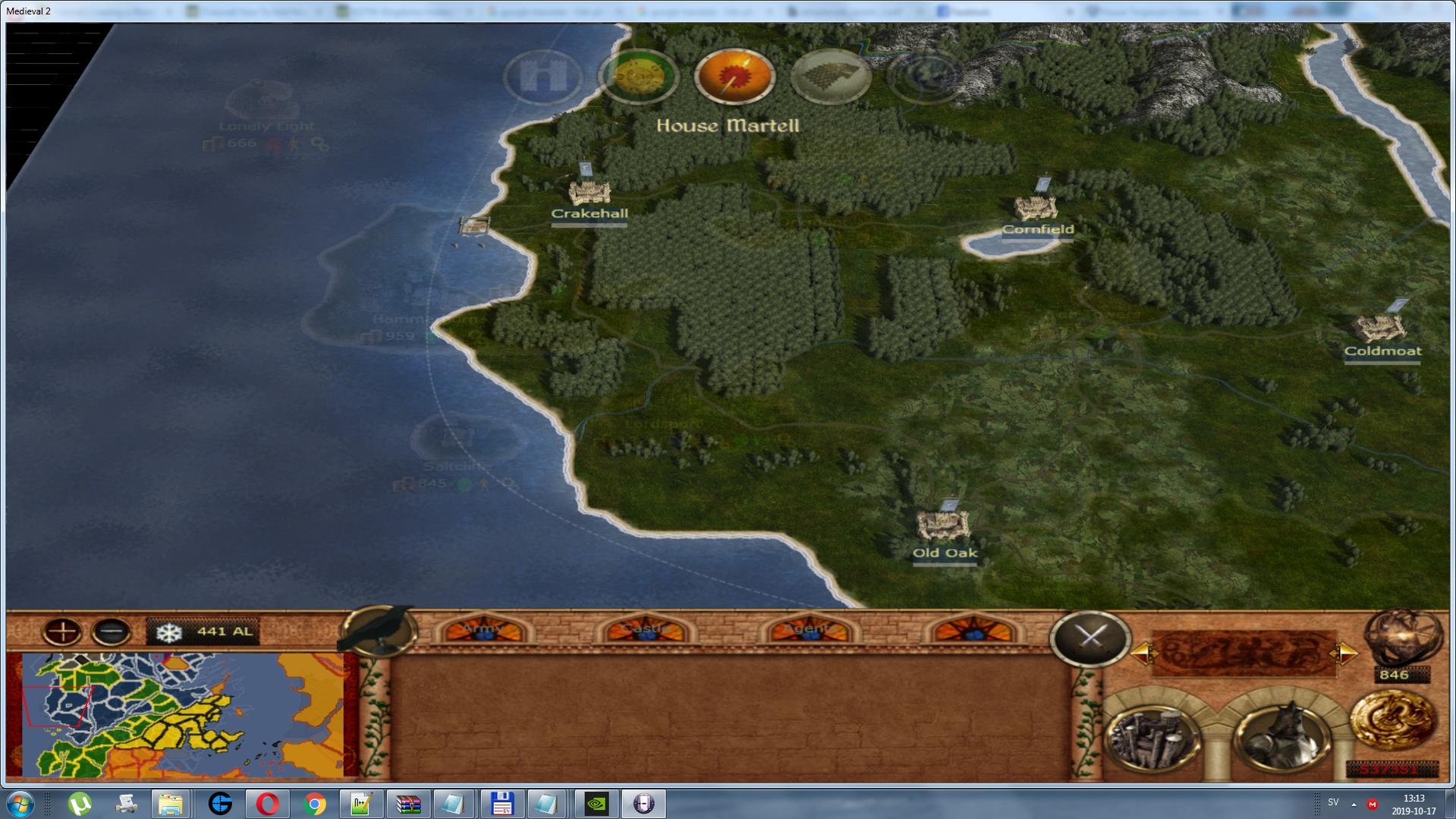 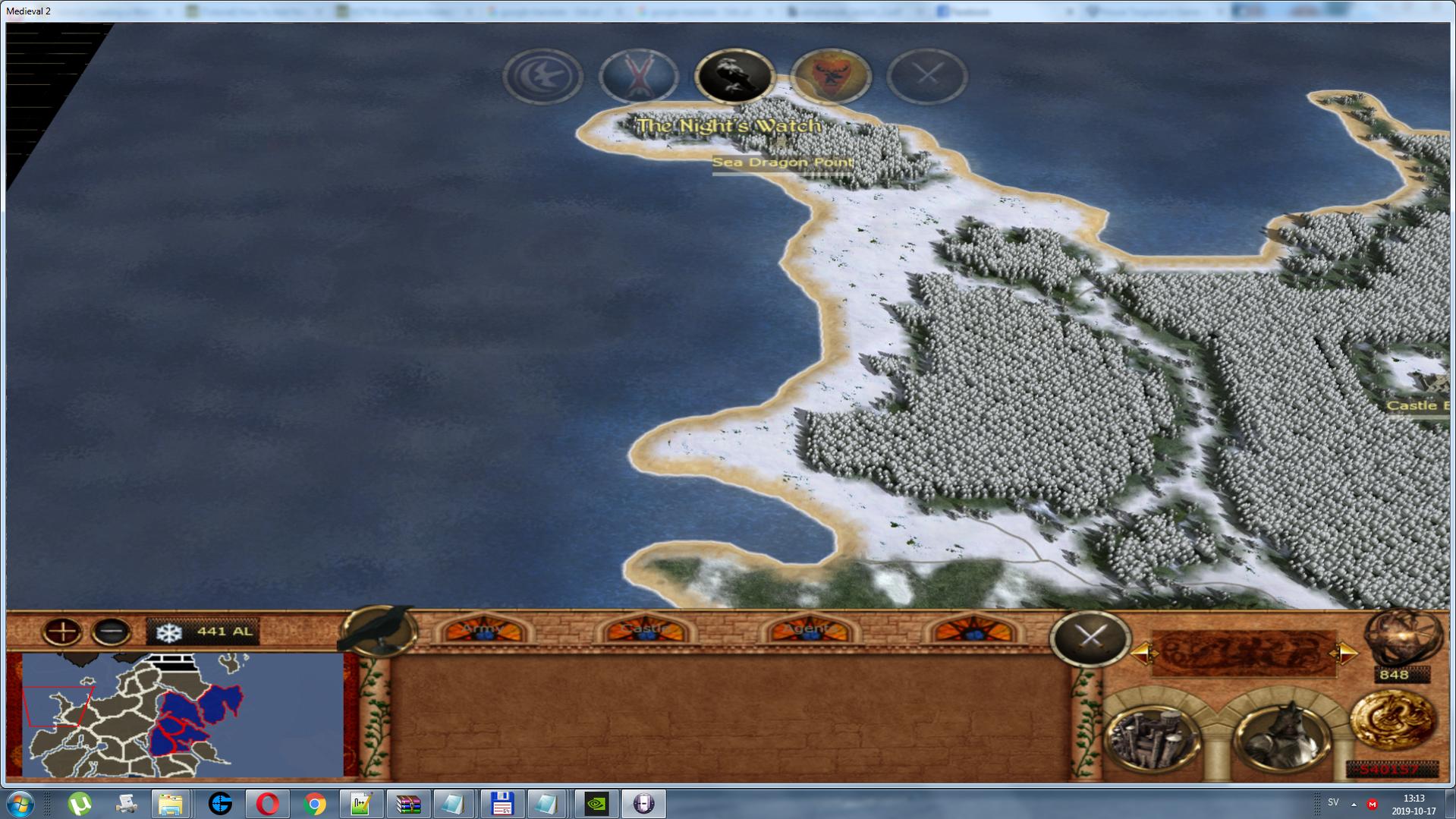 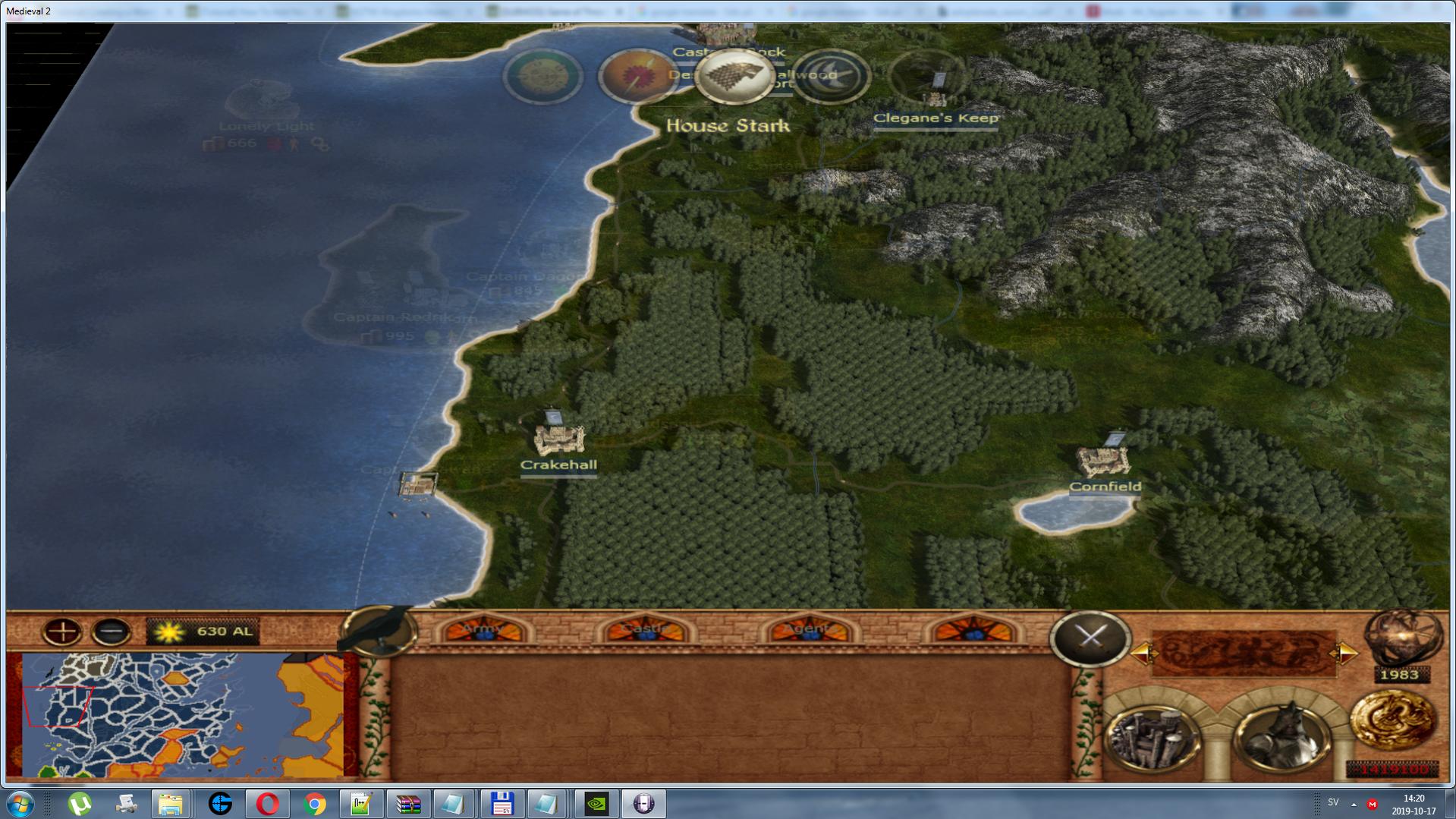 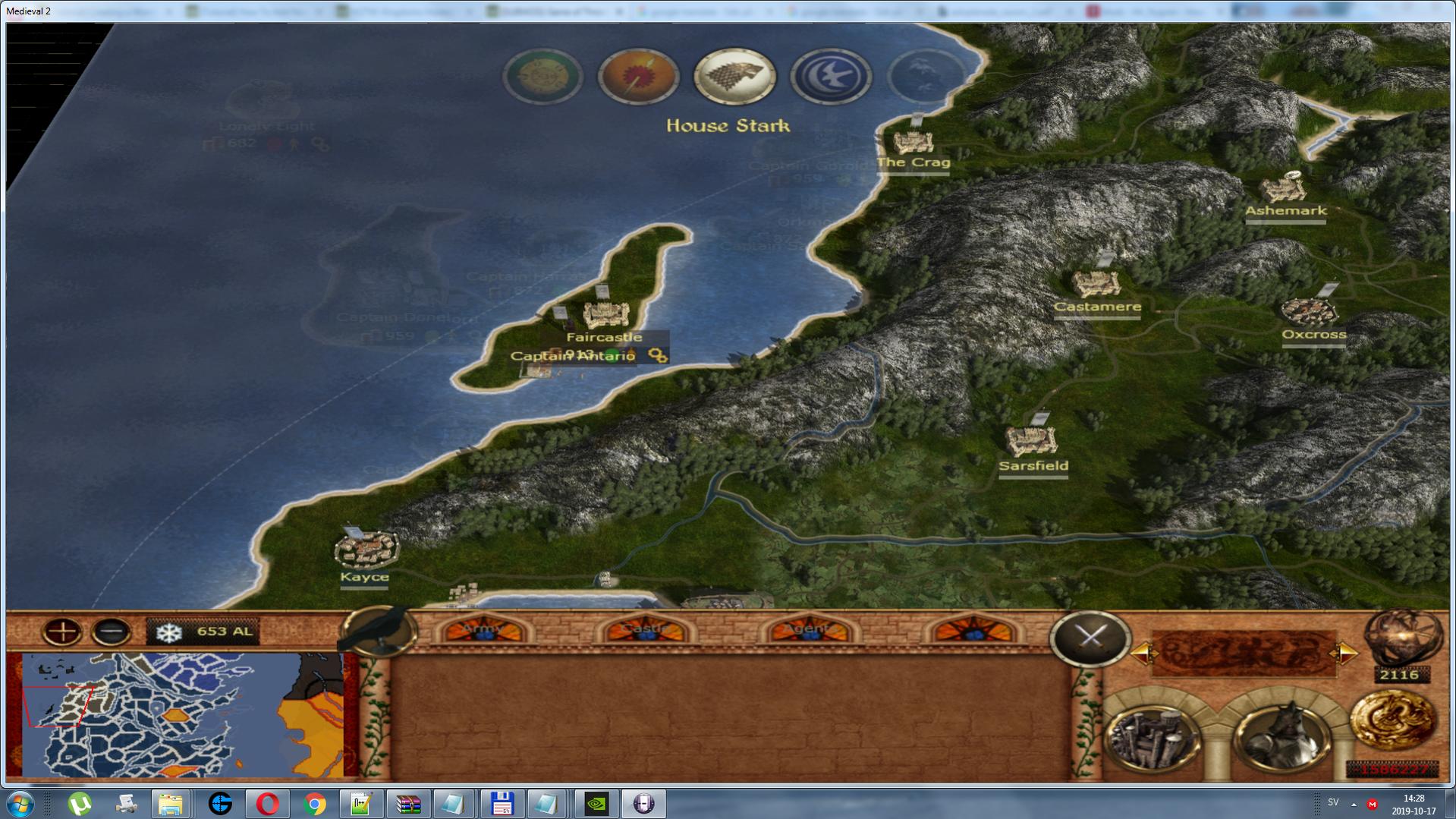 Since the above update on october 17 2019 not much have been going on for my part. However, Peaman is actively developing his GoT Enhanced inspired multi-campaign mod Game of Thrones: Fire & Blood. In this mod he has been learning new skills and made new units through unit editing in MS3D using the textures and meshes that VltimaRatio (modeller of Game of Thrones Enhanced: Total War) left behind.

I did lend him a hand with the Dragons, and made the general/Dany fit the sadle on the dragon. I'm thinking GoT Enhanced might want to use the same dragons and some of the new units. Peaman have also learnt how to rig strat_models, add unique strat model heroes etc. I haven't really been active but we had a deal to help each other- so any GoT Enhanced styled models from his mod might be used in this mod as well.

And on a final note, Elessar HS on Discord wanted to join me in developing this mod- and I've been kind of tired on modding since i finished the Hyrule update on december 18, only working some on the Warcraft mod since then. I sent him the mod, after he previewed new stuff that he had prepared for this mod and Fire and Blood- such as new ancillary art, new faction symbols for all the factions of Fire & Blood etc. He really wanted to implement the family members/generals with unique ancillaries and traits to the map of this mod made by SoulGamesInc. I've gotten SGI's permission to use the map during last may of 2019.

So Elessar is now actively developing this mod, but i'm getting the interest back to co-develop it- after reading my october post and remembering that i had finished more than i thought. Well, Elessar will be the main developer and i will help out if he needs my help.

Here are some work by Elessar that will be used in this mod to some extent, and in Fire and Blood i believe: 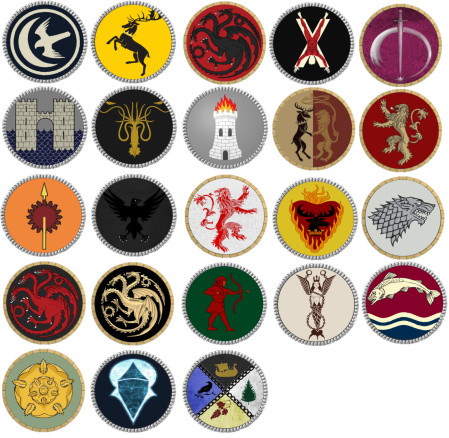 The sigils of Essos factions are most likely only to be used in Fire and Blood- with the exception of the Free Cities of Braavos. House Targaryen will of course be included- possibly both Dany and Aegon.

Elessars new ancillaries in a preview.

And this is all for now. /Mr_Nygren

I agree that they look nice.

don't you worry. All the other work looks wonderful too ;)

good work, and good luck, i hope play this soon !!

Thank you, the mod really needed a new map- with the stability that came with the map change the mod will finally be great even for Youtubers.

Is there a way to download this on a MAC?

I just answered all of this, but then my mouse button on the side of the mouse threw me back to a prior page and all my text got deleted.

It's posisble to play on a MAC, if work is done following a certain guide- otherwise the custom settlements and the custom siege engines will cause a MAC to crash to the desktop.

A different mod managed to do it, but i've never done that before- the 4.9 version of this mod is MAC-compatible due to not using custom siege engines, nor custom settlements.

This version is unreleased by the way, and the available 5.0 doesn't have the new map etc. It only has custom settlements and new traits plus some heroes not in 4.9.

So the new version with a new map is a work in progress, and won't be playable on a MAC unless the custom stuff is removed- or if someobody does the work required to make the custom cities etc compatible with a MAC.

Read the instructions of the download, not the guides from 2013.

And this version with a new map is not released yet.

Hi, just want to say this is a great mod but I've encountered one really bugging issue.

Whenever you siege King's Landing, you can only attack from a certain angle otherwise as soon as the battle starts all your soldiers just instantly get killed by the water.

Right now, I just occupied King's landing as Stannis and 2 turns later 3 nobleman (cant remember their names) from Renly laid siege and when i fought back their entire army was instantly killed by the water.

Is there a way to fix this?

I also experienced this issue when playing the current reelease. I'm not sure wheter or not this will still be an issue on the new map by SoulGamesInc - but it might be.

I don't know how to fix it if it's still there. The battles work if armies invade from other angles.

hi!
first of all.. what an incredible work, congrats!!

i can't select the nightwatch on campaign and doesn't appear at all in map...
so as the wildlings and house targaryen... or all these would be in the next patch?
thnaks!

None of these factions are playable in the current release - the map was too small.

Do you plan on adding the Targaryen's in the future?

Yep, they are planed as written in the article.