Check out some of the awesome stuff that has been put into game of engines version 1.0.4!

What engine does Game Of Engines use?
As of Game Of Engines 1.0.4, there is no current Game Engine that is being used with it. This version was mainly aimed at getting the tile placing and other things working nicely.

What is new in 1.0.4?
Game Of Engines 1.0.4 was one of the first big breakthroughs that we have ever had with this piece of software. This version actually has a working GUI which makes the level editor look really nice and lots more professional than it previously was looking. Here is a list of features that we have included:

What platforms does Game Of Engines support?
At the moment, Game Of Engines can only be ran on windows computers because of our current IDE and programming language of choice: VB.Net 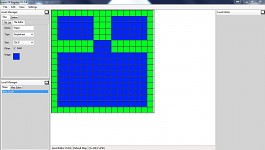 Do you plan to begin work on another version of Game Of Engines?
Hell Yeah. This toolkit does not even have an engine yet. I will keep on working till the very end!