It's been a short while since our last news here. Here's what we've been up to.

Hello everyone, we thought we'd take the chance to give you a brief update on what has been going on with the game these past few weeks. :)

We finished the first version of our internal alpha build just before the end of July. And while most of us went for a holiday Sasu bravely stayed behind to do some testing. We were still missing some features due to some technical difficulties and Sasu also found few bugs and some room for improvement. So after we got back from our holidays the programmers have been focused on improving and fixing the underlying code structure before we continue adding any new or missing features.

Upon entering the alpha we first introduced some networking capabilites into the game, which ended up causing trouble with how things were wired before. Previously all the UI elements were always intrested in who the 'active player' was, and with the addition of the networking there were suddenly two active players and that resulted in the UI acting like it had lost its mind. For example making both players research technologies in the same technology tree.

To fix this Jussi started making a UI Manager that handles all the different UI elements more independently. This means that only the UI Manager will have the player reference and then give it to the smaller individual UI elements (resource system etc.) when they needed the information. This fixed a lot of issues with showing the right player's data, but it also meant bigger change to the whole game engine in how it handles the players.

This bug didn't actually have anything to do with the UI but it was still pretty freaky.

Another change came about from Sasu's notes from the testing he'd done. In the end of each turn, the game displays the results of actions taken during the turn. This means, for instance, displaying the flight of any projectiles the players fired. But it might get rather tiresome watching the pretty pretty particles flickering on the screen for 5 seconds after every round, so we should give the player the option to skip watching this part of the turn.

This called for an overhaul of how the action phase worked. Previously the game displayed the movement of planets, projectiles and other game objects just as in any realtime game, calculating projectile trajectories on the fly. In networked multiplayer, the host's machine would sample object positions every now and then and send that data to all other clients to keep the displayed scenes on sync, and also send signals at events like a projectile hitting something and getting destroyed. All clients would see the scene played out at the same time, and it wasn't really possible for one player to skip ahead of others.

The new system we have implemented works in a manner where the host machine calculates the whole action phase and jots down its results before the action phase is visually displayed to any player. The results of these calculations, what projectile hit what and when and so on and so forth, are then sent to all clients. This way, the clients can independently control the flow of the display, without it affecting the results of other clients. Now a client can skip straight to the end of the phase and start playing their next turn, while others are still watching the fireworks at their own pace.

The cleanup/ rework on the engine was finished today and starting on Monday we will be moving on to first adding the missing alpha features and continue from there.

Also, our friends over at Rust0 games had spotted a sweet deal on the Space graphics toolkit in the Unity's asset store (it's over now unfortunately) and hinted that we might be interested... 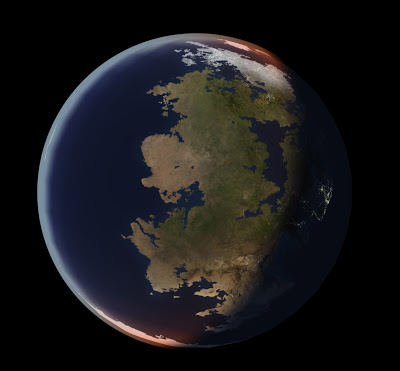 A sneaky peek of what you can do with the Space graphics toolkit. This hasn't been implemented in the game yet.

That's it again for today and see you again soon. :)