Explore new systems and features in the biggest update to come to Homeworld's FX:Galaxy mod yet.

Homeworld3 and our own RPG Mode are looming in the distance, but before you can look to the future you've still got a few matters to take care of in the present Homeworld Galaxy first. A year and some months after the release of Build 1.37, the FX:Galaxy mod is returning with a bonus release for the 1.3X series - and it will be our biggest update yet.

Read on below to discover the key features of the new build, which will be released as FX v1.39 "Last Stand". And, of course, feel free to drop by our Discord for occasional updates, multiplayer matches, guides, or just a chat with fellow FXmod enthusiasts.

The biggest reason for the delay and also the namesake of the upcoming build, the Taiidan mini-campaign is the fifth custom single-player mission to join the ranks and the most ambitious one yet.

In this mini-campaign you assume command over an elite Taiidan fleet, and use the new Battleship and its (limited) Capital Ship fleet to secure victory in an epic battle against the Vaygr, reminiscent of the Thaddis Sabbah mission in HW2. Three optional mid-mission objectives that focus on various aspects of Homeworld (e.g. capturing, guarding) can be completed to gain an advantage for the final battle and unlock new achievements.

The full backstory for this mission will be included with the patch notes. 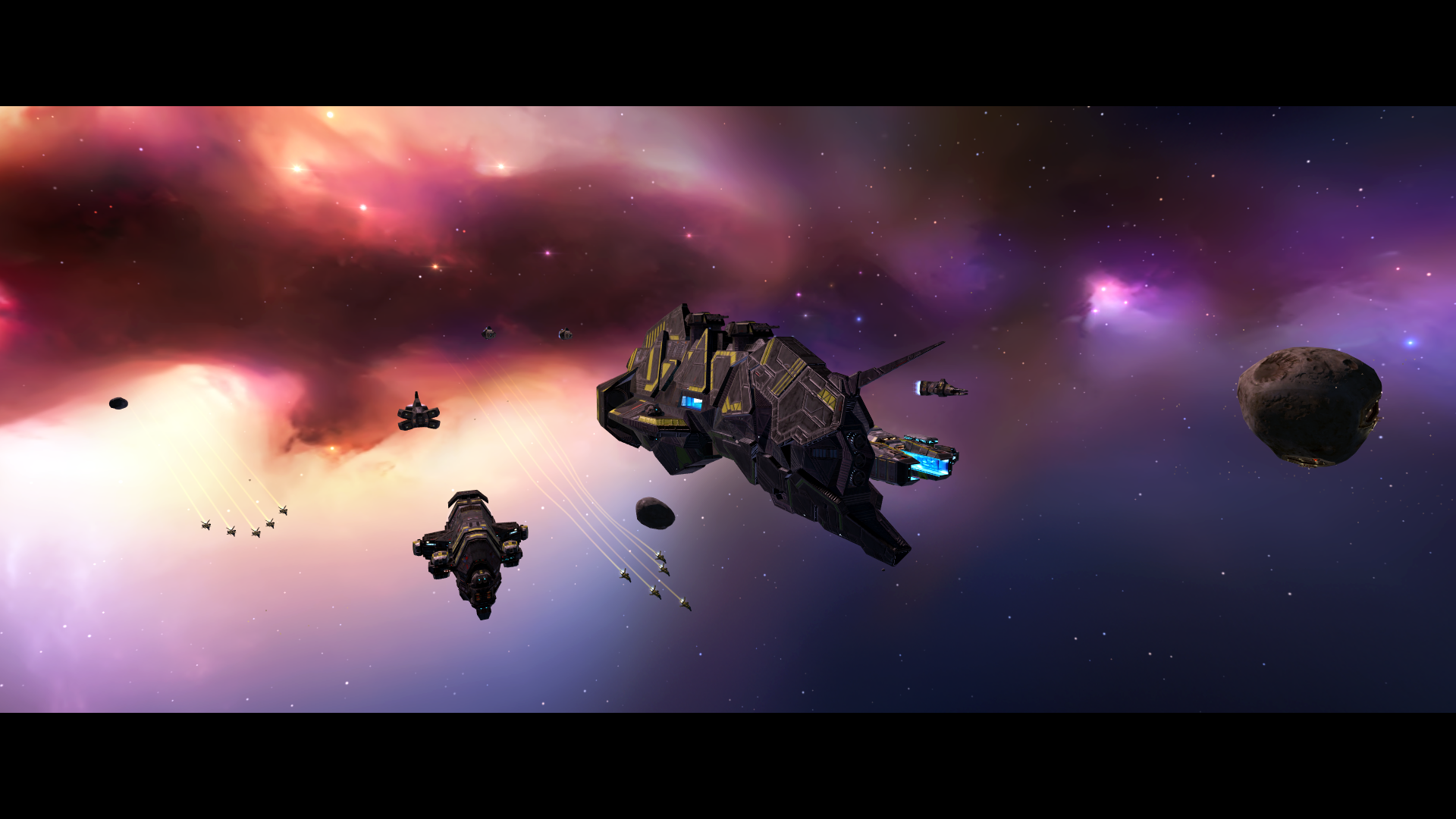 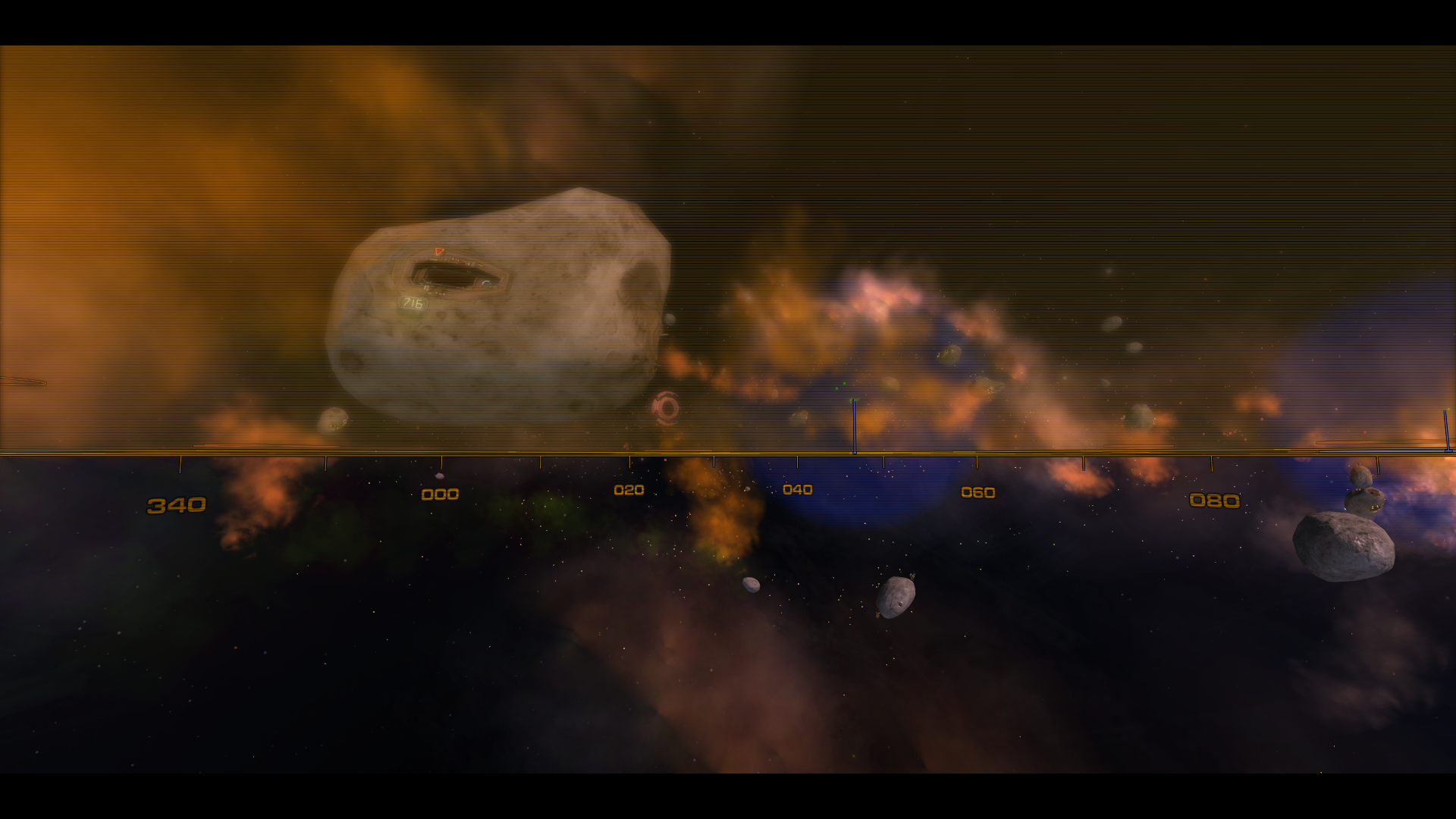 Limited space for maneuvering, a hazardous environment, and plenty of Vaygr forces:
Welcome to the Vishari Corridor.

Following on with the Single-Player content, Build 1.39 will add the third and final bonus stage for those who have completed (or complete) our 33-stage Challenge Mode "The Shimmering Path": Stage EX3 - Re:Match

This stage follows a rather unique setup in that the player will randomly load into one of four possible scenarios each time it is played. The maps are based on the key missions of HW1 and HW2, and so the idea is that you'll have a chance to "redo" the key moments of both games in an alternative universe in the Shimmering Path/Deathmatch style, and experience both factions' perspective. 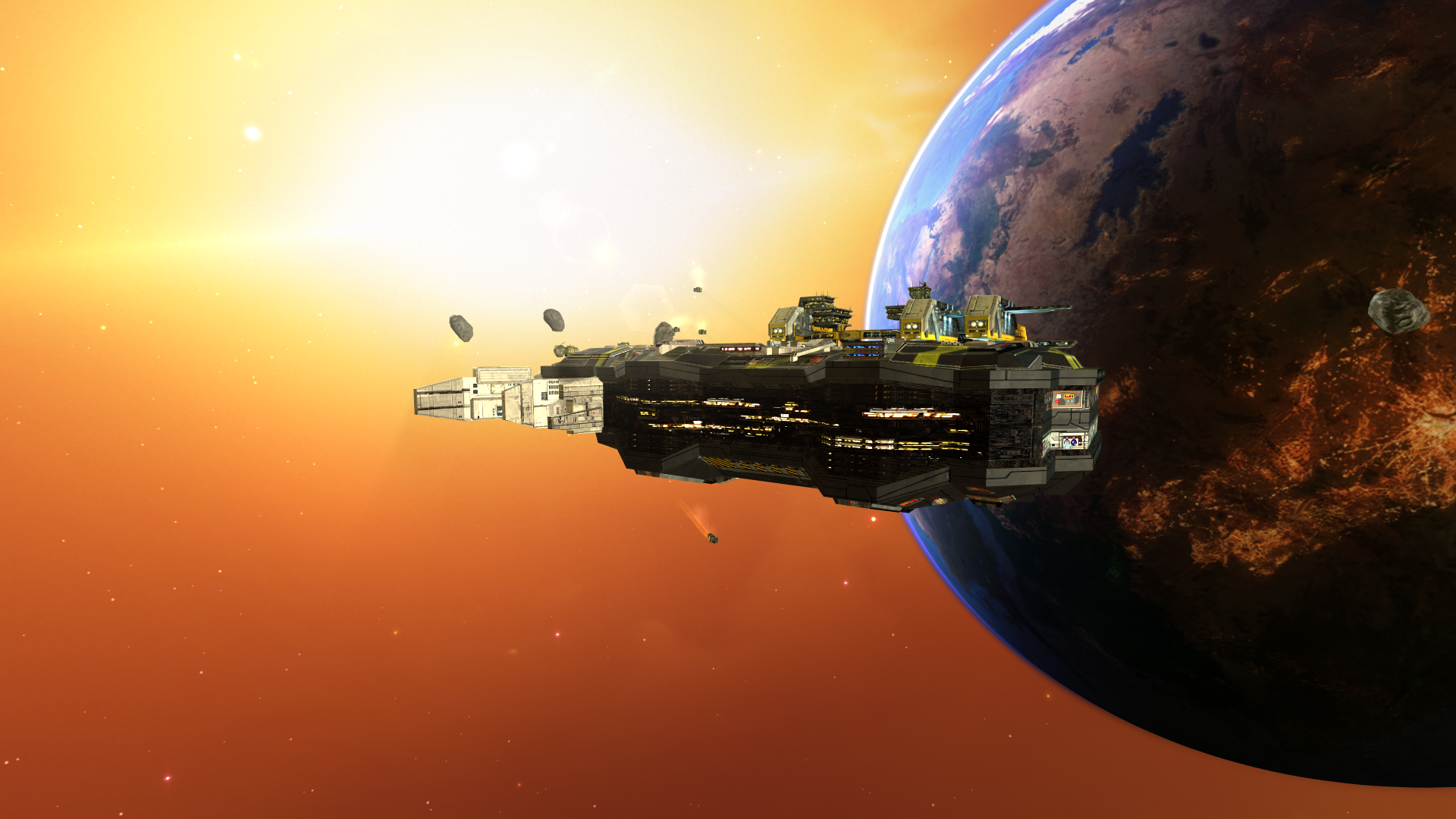 Players will once again find themselves over Hiigara's orbit, but not everything is the same.

We have previously posted a short video of the recreated Pilot View function (Enhanced Camera System), but by far the biggest feature in FX v1.39 is the new AI Diplomacy System.

In short, this is a test application of the new Selectable Conversation System and Reputation System that we recently developed for our upcoming RPG Mode. What it does? It brings the Diplomacy system from Multiplayer to Offline mode and greatly expands on it. Co-operate with allied AIs as if they were human players, and open up new paths to victory! 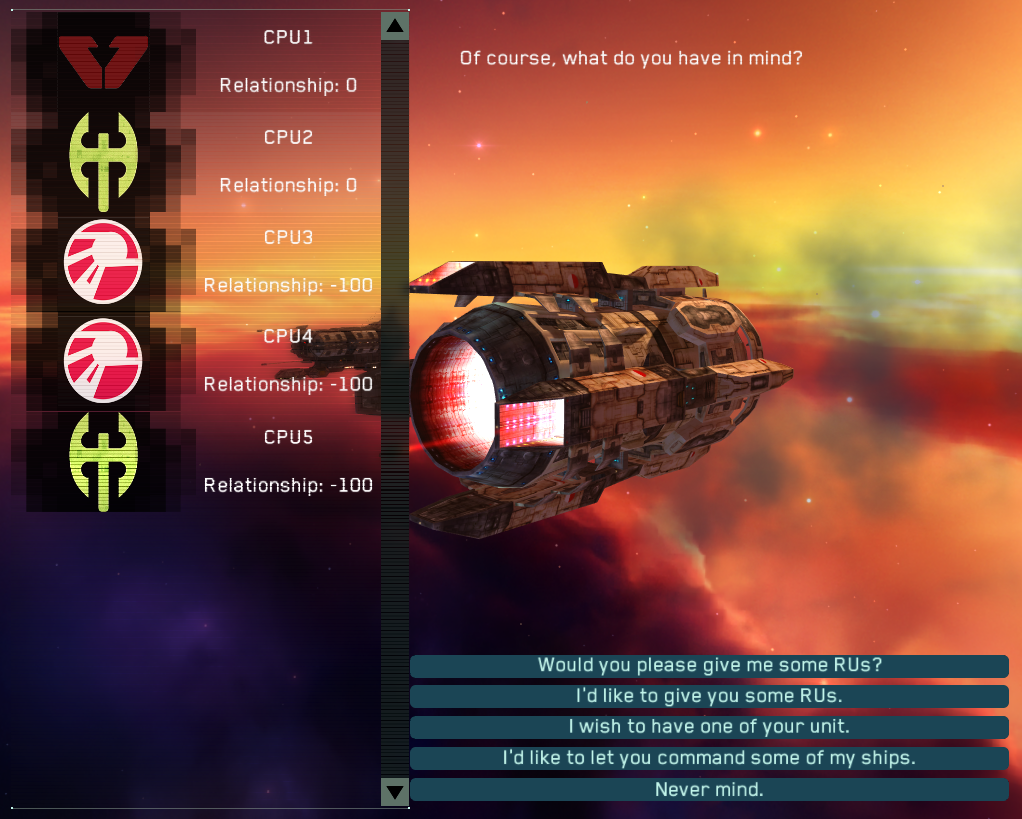 For Enemy AIs (reputation locked to -100), you can advise them to surrender - if the AI calculates that a loss is inevitable, they may accept defeat, significantly cutting the time spent on post-battle cleanups in e.g. The Shimmering Path. 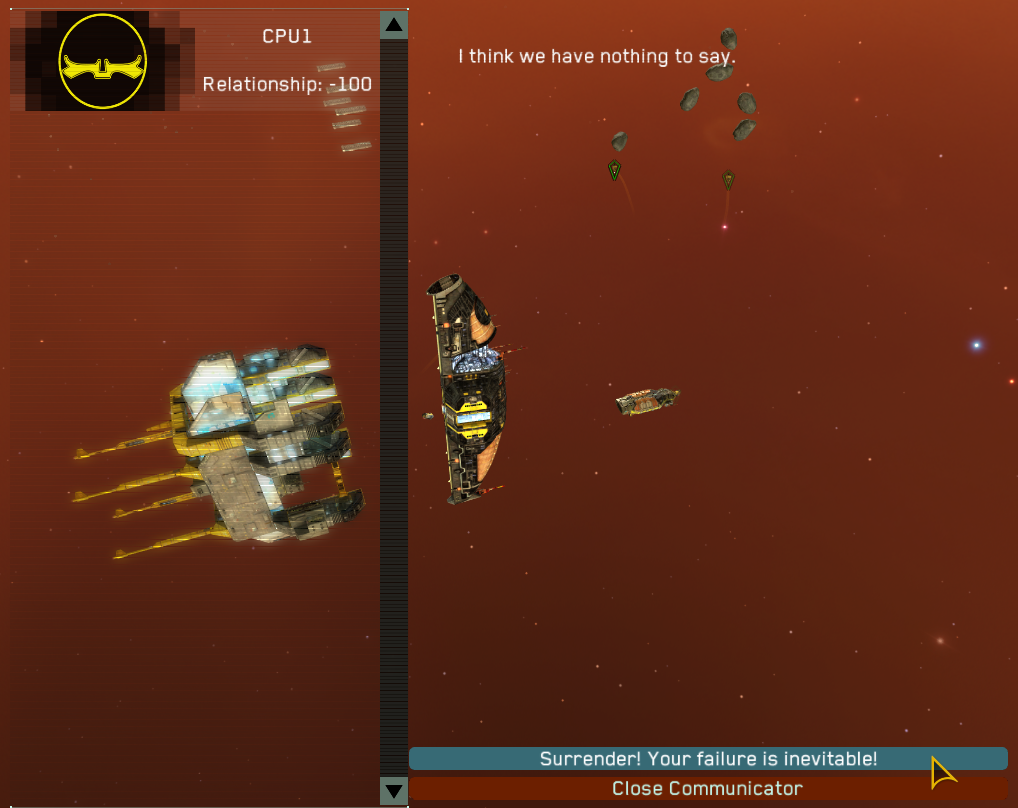 These are just some samples of the new possibilities with this system. The full details on how to use it will be in the Patch Notes. We hope you will enjoy this new feature annex preview at RPG Mode!

The above aspects of the upcoming build account for much of the time that went into the next release, but not all of it. Since FX v1.39 will be the final pre-RPG Mode release for our mod, we have also spent a significant amount of time on polishing. In addition to the previously mentioned Kadeshi Fleet Color support the zealous defenders of the Garden now have their own fleet command voice, for instance.

The Standard PvP Mode received an updated ruleset and new map thumbnails that highlight the locations of RUs on the map, allowing you to plan ahead while waiting for the match to start. 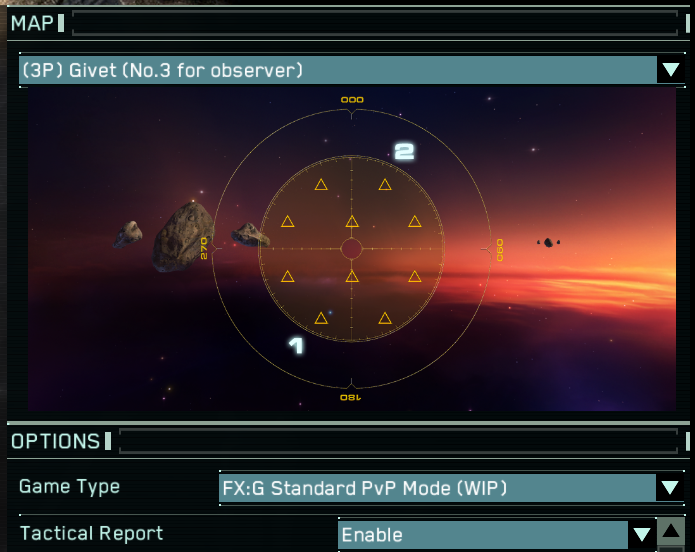 Among other changes is an update to the Music Player that especially those of you who like to record the FXmod for videos will welcome, as well as new achievements, bug fixes and balance adjustments. The Kadeshi (Fleet colors, fleet command voice), Progenitors (2 new HD units) and Turanic Raiders (balance rework) in particular have received much attention.

At this moment we are working to finalize the next build and then move onto testing it. The goal is to release the public, tested build of FX v1.39 this summer (July/August) as a 'bonus' release in the 1.3X series. We have also been busy working on the RPG Mode, as the goal for the next big release after 1.39 (v1.40) will be to provide a playable DEMO version of RPG Mode.

As we approach the release of FX v1.39, keep an eye out on our ModDB page for other updates or previews. Thanks for reading, and we will see you at the upcoming release.

Sweet looking forward to this update.

Great work, this is the only real mod I see keeping homeworld still alive. Thanks for you dedicated support to this great game and mod!

Really looking forward to this! More so than HW3