I've have seen some people asking around about the full list of weapons, abilities or controls for the PS3 & Xbox360 lately. So, in order to gather all that info in one thread and make it more visible, here you have the controller layouts, abilities, and HUDs from the game.

Posted by ElderPredator on Feb 2nd, 2010 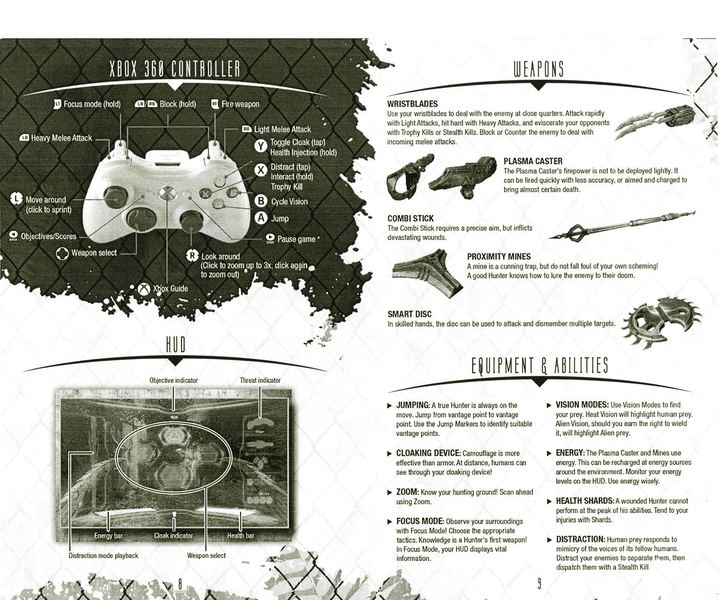 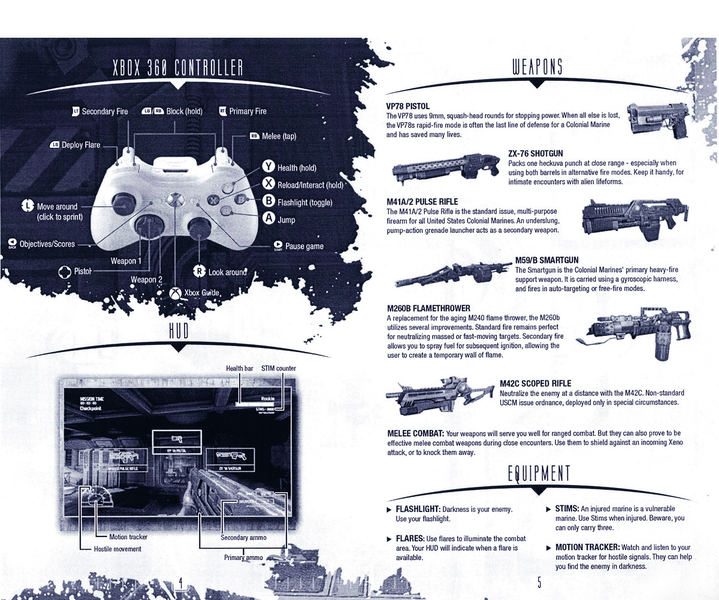 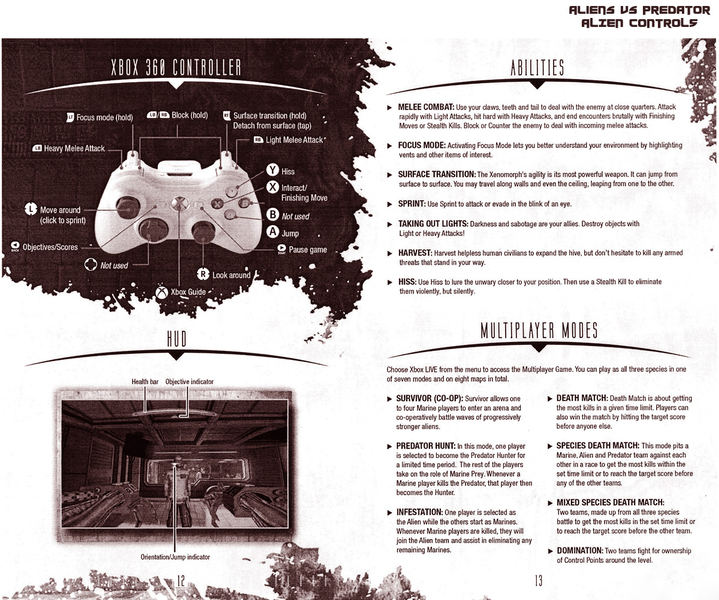 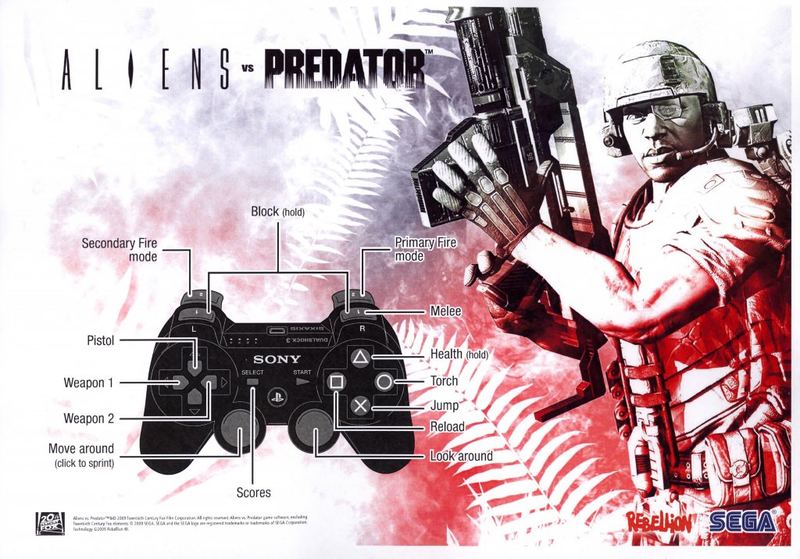 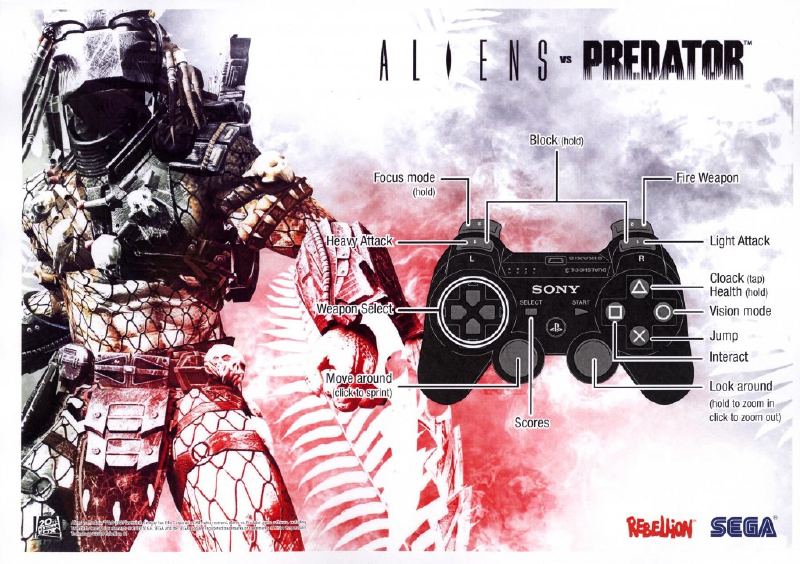 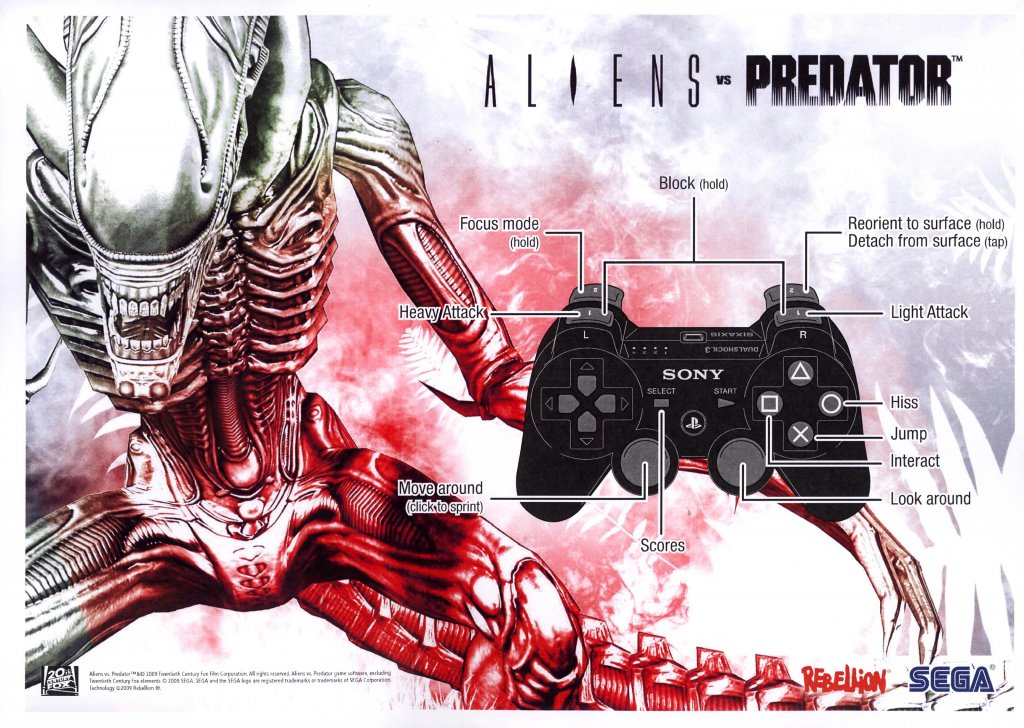 * VP78 Pistol - The VP78 uses 9mm, squash-head rounds for stopping power. When all else is lost, the VP78s rapid-fire mode is often the last line of defense for a Colonial Marine and has saved many lives.
* ZX-76 Shotgun - Packs one heckuva punch at close range - especially when using both barrels in alternative fire modes. Keep it handy, for intimate counters with alien lifeforms.
* M41A/2 Pulse Rifle - The M41A/2 Pulse Rifle is the standard issue, multi-purpose firearm for all United States Colonial Marines. An underslung, pump-action grenade launcher acts as a secondary weapon.
* M59/B Smartgun - The Smartgun is the Colonial Marines' primary heavy-fire support weapon. It is carried using a gyroscopic harness, and fires in auto-targeting or free-fire modes.
* M260b Flamethrower - A replacement for the aging M240 flame thrower, the M260b utilizes several improvements. Standard fire remains perfect for neutralising massed or fast-moving targets. Secondary fire allows you to spray fuel for subsequent ignition, allowing the user to create a temporary wall of flame.
* M42C Scoped Rifle - Neutralise the enemy at a distance with M42C. Non-standard USCM issue ordnance, deployed only in special circumstances.
* Melee Combat - Your weapons will serve you well for ranged combat. But they can also prove to be effective melee combat weapons during close encounters. Use them to shield against an incoming Xeno attack, or to knock them away.

* Wristblades - Use your wristblades to deal with the enemy at close quarters. Attack rapidly with Light Attacks, hit hard with Heavy Attacks, and eviscerate your opponents with Finishing Moves or Stealth Kills. Block or Counter the enemy to deal with incoming melee attacks.
* Plasma Caster - The Plasma Caster's firepower is not to be deployed lightly. It can be fired quickly with less accuracy, or aimed and charged to bring almost certain death.
* Combi Stick - The Combi Stick requires a precise aim, but inflicts devastating wounds.
* Proximity Mines - A Mine is a cunning trap, but do not fall foul of your own scheming! A good Hunter knows how to lure the enemy to their doom.
* Smart Disc - In skilled hands, the Disc can be used to attack and dismember multiple targets.
* Cloak – the cloaking device renders the Predator almost completely invisible to its surrounding so a patient Predator stalk its prey with little to worry about.
* Portable Med Kit – With the Predator concentrating on the hunt, it ain’t got time to bleed. So when wounded it can heal itself, but this causes more pain and gives its position away.

* Inner Jaw - Although this is possibly the quickest way for the Alien to kill its prey, it's definitely not the most pleasant way to go.
* Claws - The Aliens hands not only provide a source of momentum, they also contain razor sharp claws that the Alien will use to slash at its victim.
* Agility - The Alien is the fastest out of the three species. Not only does this give the Alien the advantage in covering a lot of ground between it and its prey, but this means it can make a quick getaway so it can regroup before going in for the kill.
* Wall Running - as if speed and jumping wasn't enough for the Xenomorph the Alien can run on walls and ceilings just as easily as running along the floor, meaning that Marines and Predators need to look in every direction for the inevitable attack.
* Tail - With whip like movements the Alien tail can disembowel men and predators alike. With a sharp spike sat on the end the tail can also skew those who aren't paying attention to those dark corners.
* Acid Blood - Pumping through the heart of that cold killer is Acid, of the highest concentration. So keep your distance when you open fire on the beast.

This is very cool do you have any Idea if it will be split screen?