Well, we're back online and active as before again. And we've got a newly made, and now fully working, Mammoth MKII

Helge129 (alias Master_Chief alias Sgt.Rho) here. After several months of almost complete inactivity, I at least am working on Tiberian Apocalypse as much as I did before becoming this inactive again. I'd like to re-introduce the mod with a screenshot of current GDI ground vehicles, and with them, a newly made Mammoth MK2. The old one wasn't making the MKII much justice, so I decided to remake it. I even tried to properly animate it.

The MKII got a few new features now. Firstly, I've added an effect to it that causes the screen so shake with every step this mighty walker makes, and also gave it independently targeting railcannons, as well as proper vulcans. It will not be built normally, but summoned sort of like the scrin mothership, but a special aircraft will bring it down to the ground, and there can only be one active per player. The sheer presence of the MK2 causes enemy units nearby to fight less effectively, due to being scared by it, and at the same time, moralise friendly units, which makes them fire more fiercly. Not much, but enough to allow a wolverine to kill a buggy rather quickly. 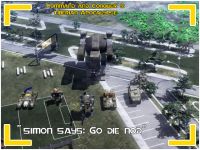 In the next update we'll have an all new harvester and refinery, as well as a remake of the remaining GDI units. But that's not all, I've made a video, unfortunately at a early stage of skinning, thus with an unfinished texture, of the walking animation of the MK2.


That's it for now.
See you soon on the battlefield, Commander.

Might be a little nit-picky here but it seems a bit fast.

Ingame it moves slower, even in 3ds max it does, no idea why it got so fast in the video.

I think the animation in the video looks just right. Remember that the speed of the old Command and Conquer games (pre-RA2) were slow, such game play would have a hard time surviving in today's environment (go back and play those games and you will find yourself cranking up to speed slider almost all the way).

Haha your right I always played on the highest speed but then once in awhile my base would dissapeer in seconds in Tib sun and then i would be sitting there going damn hunter killers ...

ok.....I know it's just a game...but the movement-animation should look a little bit real....

1) your mammoth move two legs at the same time...this couldn't work ! You will always need three legs on the ground to have a stable stand (I speak from slow movement....not from running like a cheetah)...only one leg could move forward...(thats why such walkers are so slow in their movement)

2) the animation of the legs itself is not so good....I have not the feeling, that the leg really hit the ground....I miss the "mass-effect" that makes that unit so heavy...

A good orientation for such animatons is always mother nature....here you should watch the movement of elepfants.....look at the video...here you can see the correct movement and you can see how an elepfant use its mass to attack....its very impressive.....

I got a reason to keep it that way, one is to prevent a nasty bug which causes it not to aim.

The toes seem a litle blocky, I'd say extrude the faces and then bevel them. Oh, and slant them all downward towards the outer edge.

Model's final, but I will do something on the feet with a normal map.

It's in the Autostart menu of CnC3, the "CnC3 Control Center"