Actually, Full Ace has been released four months ago already, but was only brought here today. Here is some key information about the game to make up for lost time.

The goal with Full Ace is to bring to tennis games, what Pro Evolution Soccer brought to soccer games. Realistic real-time ball dynamics and technical gameplay provide sensations and possibilities of the actual sport. The lack of licensing is compensated by a complete easy-to-use editor allowing the player to modify all characters and create new ones as well.

Other key aspects of Full Ace are independent development and online distribution. Offering our games at a reasonable price and providing subsequent upgrades free of charge is our commercial policy. 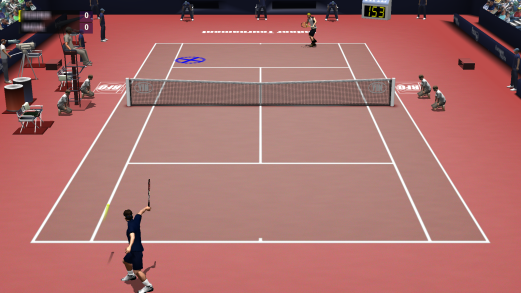 You can set up an exhibition in 1, 3, or 5 sets and choose the tiebreak rule.

Play an exhibition match against a friend on the same computer with this mode.

Including more than 200 players, 40 tournaments, 41 stadiums. All players are fully editable, and there is no limit on the number of players you can create.

Compete in a single tournament. You can choose an existing tournament in the database, or create your own tournament, choosing stadium, set rules, table size and competitors.

Compete in a full season with all 40 FA tournaments. Build your way to the top of the FA tour rankings.

Of course you can save and load your progress in both tournament and season modes. But you can also save during a match, at the end of each set. You may also save replays of your points for later viewing and sharing.

Games with online opponents are available through a matchmaking server.

wow this looks cool, never seen this before