A huge amount of progress has been made over the past week, the new vehicle classing system has been implemented, and accompanying is a major revamp to the vehicle selection interface! 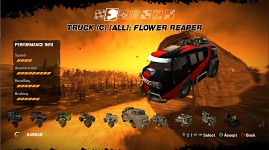 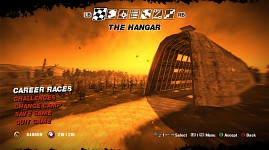 The idea of assigning a performance class to vehicles is a very common place idea in modern racing games. The fact that FUEL didn't come with such a system, left events often poorly balanced, and attributed to some of the AI issues players experienced. The setup I've chosen is to rate vehicles as either F, E, D, C, B, A, S or X, with F being the slowest/poorest performing. An example F class vehicle would be the 'Buggy [OFF]: Psychotic Fox'. Most '[OFF]' vehicles fall in the range of F to C, whereas '[ROAD]' vehicles range between B and S. I've assigned the 'Dragster [ROAD]: Damocles' in its own X class, simply because it out-performs every other vehicle by such a huge margin.

I've set up a forum thread where I'll be posting more info and answer any questions here.

For the classing system and other desired changes to work, I had to scrap the old selection interface. Thus i've begun work on brand new interface that actually provides far more information than the old interface ever did. One of the notable changes is the switch from the 6-point rating system to a new 10-point system, which gives the advantage of increased accuracy. The old statistics weren't merely ported over to this new 10-point system, but instead deleted and in its place is a whole new set of hand recorded data taken from benchmarks. I did find the old statistics to be wildly inaccurate, so just by implementing a new set of data improves the overall selection process.

It should be noted that actual vehicle performance hasn't changed, instead what your looking at is a improved way of displaying performance information.

For those of you who keep track of the regularly uploaded screenshots then you will notice minor changes & improvements to the general user interface. An example of this is the dock at the top of the screen which has switched places with the interface title. The idea behind this was to prevent the likes of the vehicle viewer from being overlapped at times.

I'll publish another news update in a week or so - but check back in the week for the occasional published screenshots! V15.2 [BETA3] is nearly finished and I hope to get it released within the next fortnight.

Awesome. I bought Fuel ages ago, now I might actually play it. :)