Check out the first part of "Reclaiming a Sun" Fiction for the Fading Suns Noble Armada universe. Campaigns just like this are playable in game. Vote now for us on greenlight! 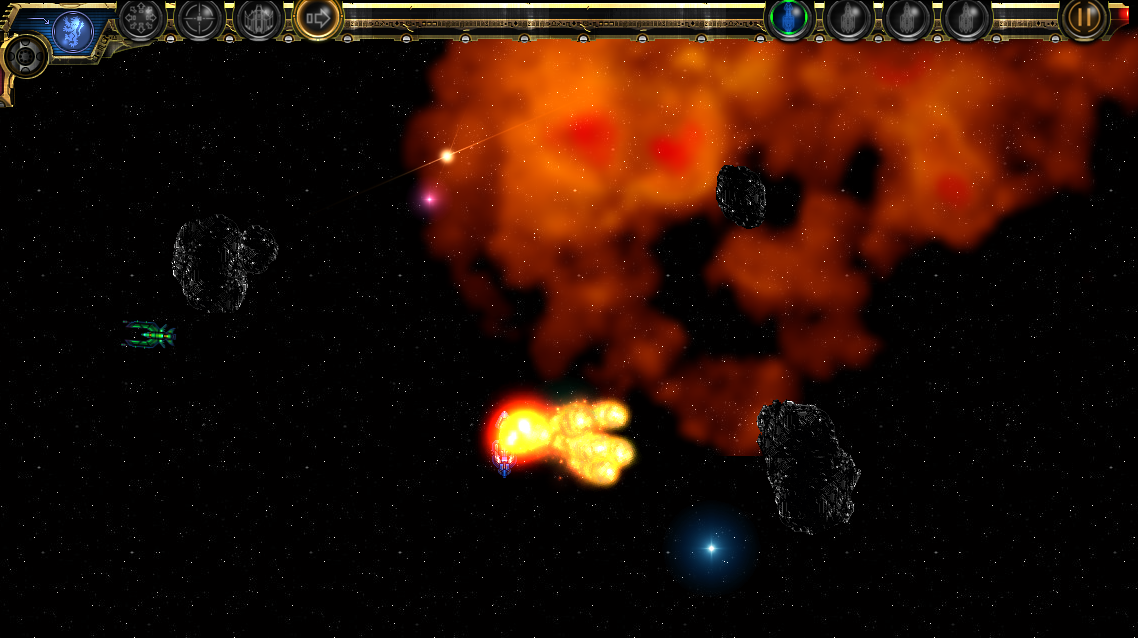 His father thought it was the lure of quick wealth, the sin of Manonism, that drew Leopold Hawkwood to this jumpgate. Acquiring the key that would let his small explorer, the Mane, pass through the gate had certainly cost Leopold dearly, and not only in firebirds. Blood, sweat, tears and promises had also been spent in its acquisition. Now Leopold hesitated. The quest to obtain the key had been understandable, something for which he could plan. The next step, however, was into the complete unknown.

The gate flickered. A small cargo ship shot out of a swirl of black and purple. It bore the familiar markings of the Charioteer guild. As Leopold waited for the gate to reset, he steeled himself. The Charioteer probably came from Criticorum, and looked like a low-level guilder carrying common goods along a well-traveled trade route. Such a life frightened the young Hawkwood more than did whatever unknowable horrors his new key might access.

When his captain's console hummed with life, the evidence that the jumpgate was again ready for use, it was that very fear at drove Leopold's decision. With a tight smile on his face he gestured to Tomas, his pilot. The pilot activated the ancient jumpkey. As the jumpgate swirl began again, Leopold's ship surged forward.

The only awareness of the transition Leopold had was the sudden shift of stars on the view screen before him. That shift, however, was exactly what he sought. No one from the Known Worlds had seen that star field in centuries, ever since this jump route closed off at the end of the Second Republic. This, the thrill of discovery, mattered far more to him than did any thoughts of wealth. This was what all his efforts had been leading toward. He relished the chance to go where no one had gone for hundreds of years.

Suddenly his view screen lit up with a fiery display. "Blasters," yelled Atila, his weapons master. She pressed a series of buttons. "Our aft shields are almost gone!"

"Accelerate and turn to starboard," Leopold yelled back. "Who is hitting us?" His fingers flew over his console. He cursed to see that the jumpgate had yet to reset. Escape was closed to him.
"Explorer behind us," said Atila calmly. Her tone changed to one of surprise as she scanned the enemy. "Decados!"

So the Hawkwood were not the first to return to this lost system! Leopold's anger grew, not from the danger of the attack but from the realization that he had been cheated of his great discovery. No Decados explorer was his equal, much less his superior. House Hawkwood had beaten its enemy during the Emperor Wars, and he would beat them now.

The Hawkwood ship barely avoided the next volley of blaster fire. It continued to accelerate away from its assailant, but the turn allowed Leopold to bring his own lasers to bear. They flickered in the darkness, and there was no mistaking the flare as they triggered the Decados' shields. The
enemy ship looked like nothing more than a sentinel, placed at the jumpgate to warn others of intruders. Its captain must believe Leopold's ship was easy prey, and sought a prize instead of leaving to gather reinforcements elsewhere in the solar system.

"180-degree turn!" Leopold shouted. "Bring the starboard lasers to bear." As the ship turned, the enemy blasters again struck home. The starboard shields held up. The Hawkwood lasers, however, struck the same shields they had before. Leopold smiled grimly at the explosions he saw play across the Decados ship. Now the Decados ship began to turn, hoping to bring new shields to bear, but Leopold knew he had gained the upper hand.

The Decados' blasters did more damage than his lasers, but the lasers, moving at the speed of light, were more likely to hit over long distances. When the Decados ship turned, it could no longer continue accelerating toward him. The Hawkwood took advantage of this to continue speeding up, extending the range between the ships. Maneuver jets allowed the ships to turn freely, bringing fresh guns to bear again and again, but the ships could only slow down by applying counter thrust in the opposite direction to which they were flying.

Leopold knew this strategy well. He kept his ship at a distance from the Decados and turned as his enemy turned. This allowed him to concentrate fire on one set of weakened shields while the Decados blasters proved ineffectual at the growing span between ships. The Hawkwood salvos grew more and more devastating as the Decados shields grew weaker and weaker. It took less than a minute for the Decados to try to turn tail and run. One more salvo tore through its hull, leaving it a lifeless husk. Now the Hawkwood closed the span, preparing to strip this unexpected prize of anything of value.

Vote for us on Greenlight!