Hello everyone! I know, this one took a while, but i belive wait was well worth it. This update brings last location of main storyline and tons of tweaks, improvements and additions. I ll try to stay as brief as possible as otherwise this article would be longer than all BRT news combined.

Tundra, home of Purifiers faction and place where largest supplies of purified water can be found underneath frozen ground of these chilling plains. Purifiers are military like organized warband. Unlike bandits and their swarm of fast and cheap vehicles trying to stop you, or Riders with squads of cheap bikers, Purifiers drive vehicles which almost always have superior armor or fury shields and carry some very powerful weaponary like incinerator flamers or tesla canons.

While designing Purifiers i tried to make them somehow unique when oposed to other two factions and force players to choose different approach again, if he/she wants to face those effectively. High alpha damage weapons like scorpid launchers are ineffective couse of huge hp pool most of Purifers have, some of their drivers will even try to outsmart and outrange your interceptors. And in addition, Purifiers wont hestitate to use specialized vehicles with heavy frontal armor that need to be dealt with from sides or behind. 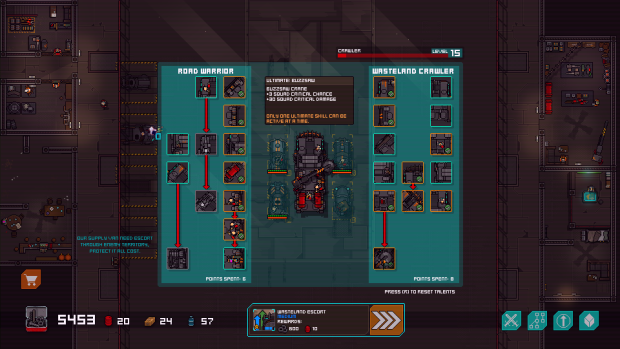 I belive i fixed all reported bugs, if i forgot to fix anything, then i am sorry and will be fixed later if you ll remind me again. Decided to go with point list as nobody is interested in details and wall of text anyway, so here we go:

Major additions except the Purifiers and tundra is the new mission mode and patrol events. Rescue mission type is twist on escot mission as you have to split your group in the begining of the mission and slowly work your self towards reuniting with your main vehicle and succesfull end of the mission.

Patrol events are unexpected detours during patrols. "There is suspicious looking dust cloud to the west, how do we respond?" or "We received urgent message, calling for help, just a few miles east of us." are just a examples of additional choices you will have during patrols. Currently, there are just "suspicious dust clouds" whitch are always random type of enemy convoys for now, warlord intercepts, and help requests. However i have much bigger plans on expanding these, and im glad system handling these random events is in place.

We are getting closer to early access, but there is still a lot of work to be done. I wont bother you with technicals and details, but will give you general points of my focus for following month:

As you can see i ll be quite bussy in following month and half till planned early access release as there is still a lot to be improved beside these main points. However, if i ll succeed, i ll finaly be able to bring you Blasted Road Terror experience which ll be very close to my original idea when i started work on this game.

Thanks for reading & with regards