A new year is upon us, and it is time to show some of the work that has been done behind the scenes for Frontline Chaos.

A new year is upon us, and it is time to show some of the work that has been done behind the scenes for Frontline Chaos.

First of all, let us introduce this lovely couple: the Duke and Duchess. These vehicles are two different offsprings from Revenant research into weaponizing nuclear power into a movable platform. Where one is completely focussed on taking the fight head-on and crush any resistance in the field, the other takes a more distant approach and brings destruction from a range. In-game, they are available at the highest tech tier, and are mutual exclusive: if you choose for one, the other cannot be built for the rest of the match. Due to the research and materials required, there can only be one active on the battlefield at a time.

The choice is yours: do you choose to reinforce your frontline army with the immense firepower and armour of the Duke, or will you choose to bombard your enemies from a distance with the Duchess? 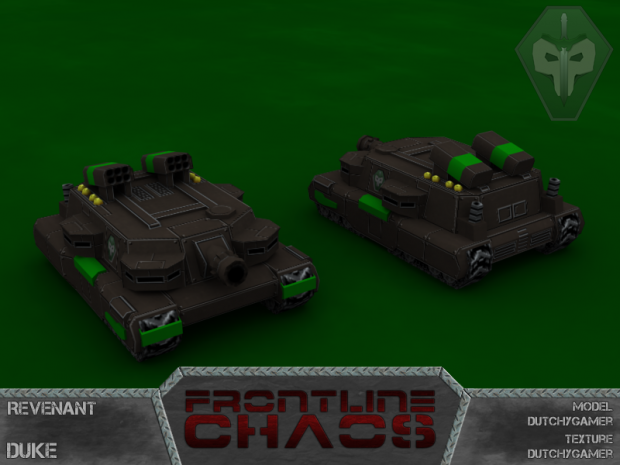 There are few units more effective in direct combat then a Revenant Duke. Its primary armament is a short howitzer gun, which fires nuclear-tipped shells. These shells rip through vehicles and structures alike, and will instantly vaporise any enemy soldier in the impact zone. To compensate for the low rate of fire, two rocket pods are installed on the roof to provide fire while the howitzer is reloading. Lastly, the Duke has room for four passengers to ride and fire from the vehicle, increasing its firepower and versatility even more.

The Duke is equipped with enough armour to take on the heaviest vehicles. The whole vehicle is powered by an experimental nuclear engine. A downside of this, is that it will explode when the Duke sustains critical damage. As a last resort, the engine can be forcibly overloaded. After a few seconds, the reactor inside the engine will detonate with the force of a small nuclear warhead, destroying the Duke and anything nearby. 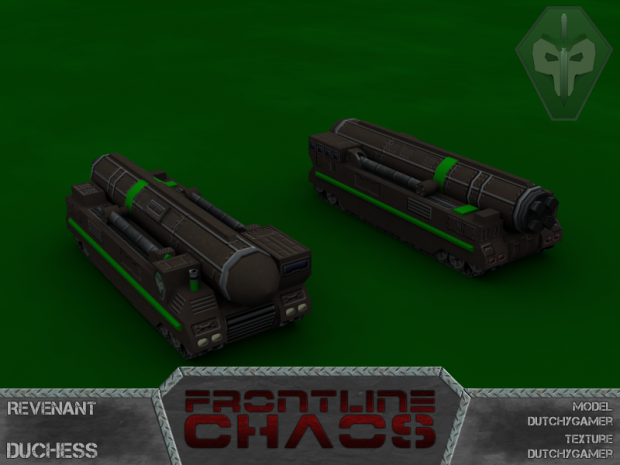 The Duchess is the Revenant's final answer to siege warfare. The large tracked vehicle is a self-sustaining platform that can carry, fuel and launch tactical nuclear missiles. It has one of the longest ranges of any mobile military vehicles on the battlefield. To fire a missile, it first needs to deploy stabilizers and raise the launch tube. The missile itself is equipped with advanced technologies to confuse and counter any anti-missile systems, to ensure it will hit its intended target. Whatever the target of a launched missile, as soon as the missile's nuclear warhead detonates the target and its surrounding area will be vaporised in nuclear fire.

While a Duchess is heavily armoured for a siege unit, it is still a sitting duck when enemies get within its large minimum range.