And from the Ashes we strive towards the Unknown... Here we have the first touches to the City of Arabel and what lie in wait for our unfortunate Player and what is yet to come in the future. Enjoy. 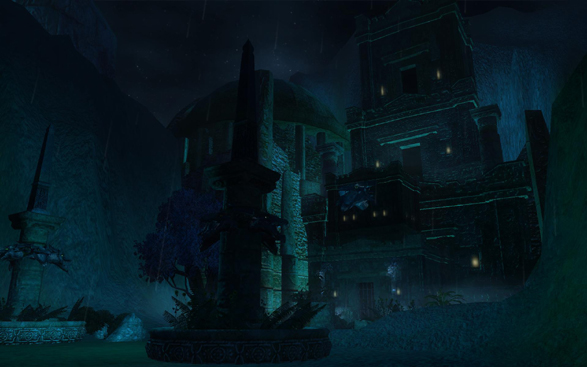 “...I stand now on the Edge of the World and stare the Oblivion to open before my eyes.

All was silent; not the Stars nor the Moon no longer sung their songs, neither the Wind call me – for at last I had come to the end of my Journey.

How long I stood there, I do not know. I watched the barren Stars, silently gloom beyond the vast firmament, standing still with their faint haze slowly obscuring. Their beat stolen, they too, would be blinded by agony, their withdrawing souls now longing for Death.

My devoted love and sacrifice so profound took backward steps away, and loneliness aplenty stretched before me.

Long have I traveled, suffered the burden of the strenuous trek that led me here – beyond the reach of anyone who ever dared to follow me. 'Twas time for me to spread my broken wings and fly – fly towards the Pantheon. For all Eternity.

From the sole Throne of cold stone, I would watch the Moon grow old, singing its solitary song, and ponder upon the worthy, but futile attempts that took me here, condemning the loss of what once made me Immortal. What fires had burnt in my Heart, were now just the embers of a Sun's dying light...

My farewell soars in the Dark colonnade Halls, like a thousand echoes singing their irreverent verse. From my hand, I would release the remnants of my fate and let them form the Stars above for remembrance of what once was and shall never be again. Only the defiance of the burning Sun would smother it all away. But so it was, that its flicker had diminished and died and we would wander in the darkness, reaching out for a hand that would guide us towards to where the Sun would once rise again.

I sit there petrified, sailing down the eternal streams of my mind and close my eyes..” 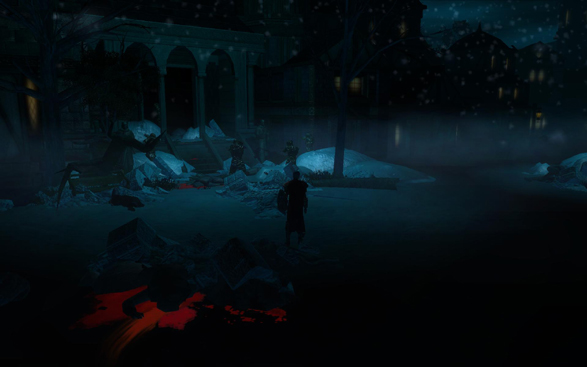 "Come, come to the balcony with me and see what you have wrought within this City. With so much blood in your hands, so many lives lost, so many people sacrificed for those who own you. And for what? What is it in your mind that you think that you achieved? For what you truly see with those blood-ridden eyes of yours, is an escape; escape from the trails of horrors you have so long walked. Hah! You are an incarnation of vanity and yours is the fate most fitting. Trust my words, for I know. Make yourself useful and plunge down to the already bloodied streets of Arabel and your escape is fulfilled..." 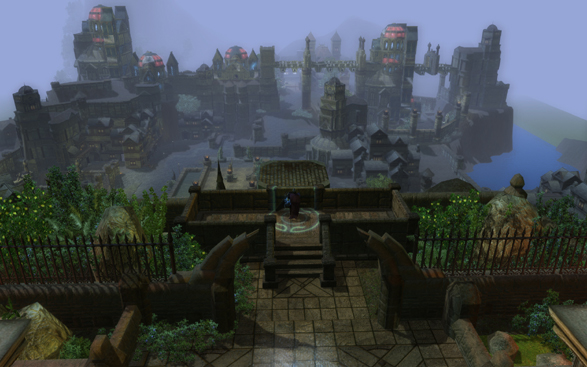 Arabel, the mercantile City in Cormyr stands tall with its stony walls and citadel-like provenance, marking the wealth it boasts within the region as the vast promenades are filled with buzzling people from afar, as are the many secrets within. Arabel marks the second individual story of The Moonlight Path adventure that sets in after the horrific events of Alaghôn. Escaping the dark events, the Player comes back to His roots confronting the mischievous organization of The Zhentarim, now infiltrated within the very walls of Arabel. Dark secrets and happenings brood inside the immense walls and towering heights of the City that eventually unravels the true face of our wandering ”Hero”.

The story is a dark, immersive story of devoted love and escape from perpetual horrors that stalk the Playing character and everything that surrounds Him, for good and bad. There is no room for Good, Bad or Neutrality, for all is masked behind a mirage; mirage of not knowing who You really are.

Player is forced into a chaotic setting where one must decide the fate of the many factions and strive towards to the Final event that is the very start and esssence of the whole Moonlight Path adventure. 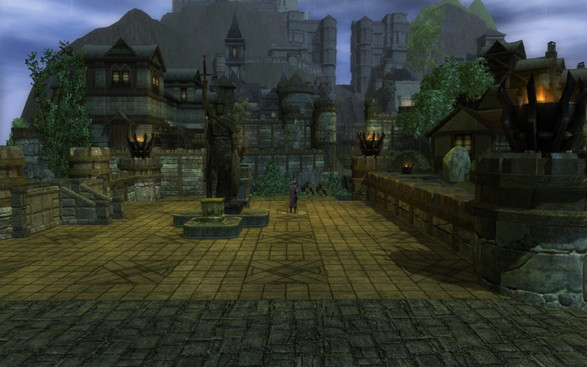 About the adventure (in short for now):
And this is where all the devoted followers of this Mod come in.
As I have been away from this whole thing for the past 7 years, due to all kinds of crap going on and really losing my devotion, I decided to create the whole City of Arabel a-new. Just to see if I am still up to this whole thing. And while doing this for over a 100+hours, I was thinking how this all could really work the easiest, for all things concerned.

NWN 2 mechanics are old, sloppy and doesn't really do justice as to what I try to create here. It would take me an Aeon to create all the characters (for the infinity of events and settings considered) to be certain level, think of all the experience as how far the PC can be evolved and... well everything. I came to the conclusion it would really serve no purpose in the end and would be a far too strenuous task to perform.

Thus, here is a solution that would simplify the overall creation of the Mod and characters and how the story advances smoothly, yet in a bit of a linear way – whereas the ogirinal idea was far from this kind of ideology. I would suggest the following:

I would strip away most of the combat in game – I know, this sounds harsh and BORING at best – and would strive towards Torment: Tides of Numenera kind of approach, where PC goes through 80% of the adventure in a form of dialogue with all the possible choices to alter the events He/She is currently engaged with. This would tremendously strip off the nuisance of excessive coding/scripting (since I still haven't found anyone interested to do that for me, for I am 150% no good of doing that).

I would reduce mandatory combat events for bosses, certain surprise events depending on the choices made while doing certain quests and events that require that sweet old blood spilling, just to keep a little interest, not just running wild in vast locations reading and running from place to place.

There is much I need to reduce from the original setting, otherwise this whole adventure will not see a light of day at all... if it ever will. For this is the counting moment where YOU good folk decide, whether I do this in the simplified form or just thrash bin the whole idea of even trying to make this work for the NWN 2 game at all. It would be awesome to make this as an open-ended Mod in a sense of The Witcher or alike, but I don't think that would really be a good idea.

So, all in all, what do YOU think? The ball has been thrown to You now.
There's still over 200 pages of documentation for both of the Prologues (mostly for the first one at this point), over 3hours of usable music, most of the quests waiting to be implemented and a plethora of dialogue to be written.

Is this the very End of The Moonlight Path adventure where the Moon diminishes away and shatters to million pieces, or is there still a flicker of hope to be had....?

I will make a more coherent and fulfilling update later that makes more sense and fills up gaps and all.
Meanwhile, bombard me with questions and tell me what is it that you want. Thanks everyone in advance. 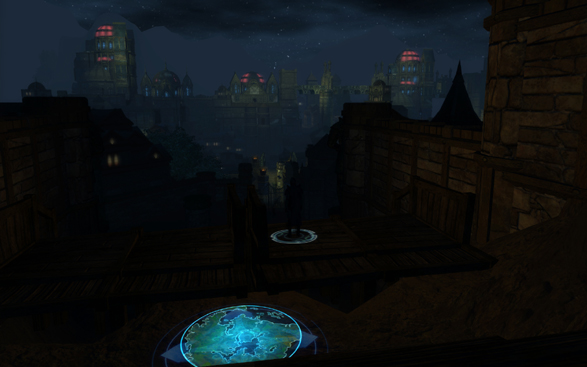 You should post this on the Neverwinter Vault. That's where the vast majority of mods/scripts/modules for NWN1 and NWN2 are and where the majority of people who play the game are going to be looking for new stuff. Neverwintervault.org

Really now? Cool to know, I wasn't really much into taking any notice of NWNvault, despite I knew it seemed a prominent choice, but somehow neglected its existence.... guess I need to delve deeper. Thanks!

Is it just me, or are the NWNvault website just plain awful and horrible :D . Made a project update there anyways, so let's see if I can navigate this thing. Seems somewhat lack somewthing, or then I am just confused, as always.... *Shrug*

Wow I remember seeing this project first pop up so many years ago. Anyways, in regards to your question about possibly reducing combat or eliminating combat entirely, I for one say, go for it. The most memorable parts of a lot of RPGs have been the choices and consequences involved. Heck we just need to look at the recent critically acclaimed Disco Elysium to see that there's clearly a huge appetite in the market for games with dialogue-heavy, RPGs with branching choices with little to no combat.

But no matter what you choose, the work you've got so far is really awesome looking, and I hope only the best for your endeavors! Cheers!

Thanks for the feedback! Yeah, it really seems that the no-so-heavy-on-combat is coming back in a way or another (like the non-combat survival horrors for one). Because that's what an real RPG is all about; the dialogue, choices and the consequences of actions taken. As far as I know, Diablo II was NOT an RPG, whoever decided to market it that way anyways.

It's just the NWN 2 character evolvement doesn't just.... I don't know, the rule-set SUCKS :D if it would be 2nd Edition or even 3rd (was it 3rd (or 3,5) that was used in Icewind Dale 2 ? ) it would be easier and much more enjoyable to actually create more combat sequences and be more on the map as how much experience should be boasted by any given event/combat and bla bla bla....

Well, let's see what happens. The game is ON!

Simplified form sounds good - it would be a shame to lose all that work.