It's Friday and we have another weekly update for you. If absence truly makes the heart grow fonder, then this week's patch to the Spark tool set should be met with thunderous applause (we skipped a release last week). If that's not enough to muster a hearty clap, we also have three sound montages showcasing the work of Simon Kamakazi, the sound designer for NS2. Enjoy!

This week we're releasing Build 137 of the Spark tool set, which is available to everyone who has pre-ordered Natural Selection 2. The Spark tool set is the package which includes the level editor, viewer, and model and texture creation tools.

Here's the complete list of changes in this patch: 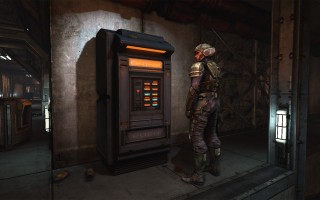 Does this thing accept resources?

Note that in order to run the tools in the SDK you will need your game key.
Download ns2_setup.exe (360.3M)

This week we'd like to introduce you to Simon Kamakazi, the man responsible for all of the sound effects in Natural Selection 2. Simon is an electronic music producer and sound designer in Sydney, Australia that we've been working with for the past 6 months. All you really need to know about him is that he makes great sound effects and his last name is not actually Kamakazi.

Here are three sound montages that Simon put together using his Natural Selection 2 sound effects. These montages help us get a feel for the overall mood of the game and how different sounds sit together in a mix. Let us know what you think about them!

Ambient montage (crank it up!)

Simon says: "This one essentially simulates a fly-through of a few corridors of a typical NS2 map, this is a compilation of some of the many background sounds that can be placed around maps using the editor. I wanted to keep some of the feel from NS1 with the background sounds in NS2, the ethereal sounding synths you can hear near the start of this piece are a reference to the background music you could hear at the start of an NS1 game."

"An important theme in NS2 is nature, although the environments are dark space stations, and refinery's on alien planets, we wanted to have hints of natural sounds coming through the industrial buzzing and humming. So for example toward the end of this montage you can hear what sounds like breathing, the sound was actually made from recordings of industrial machines and the heavily processed to sound like breathing. Some of the newer sounds not in this montage are things like, cicadas buzzing made to sound like a transformer or neon light buzz, and rain forest recordings turned into creepy industrial sounding atmospheres."

"This one combines the ambient track with some of the marine teams sounds. In this one you can hear most of the marine weapons firing, as well as a few reload and deploy sounds and the new distress beacon. The NS2 rifle folds up when its not being used, so its deploy animation shows it unfolding, for this sound I combined various metal clicking sounds, with sounds of my printer, and a CD players opening to get the little mechanical layers. For NS2 we wanted to avoid using commercial sound libraries whenever possible (they are so over used), so most of the sounds you will hear in the game are things in my garage or have been synthesized, for example the flame-thrower fire sound is completely synthetic apart from the little metal clank at the end which is the sound of a metal tool box."

"The Kharaa in NS2 have a very slimy gooey texture to them, the base sounds used to make these are recordings of squishing oranges, wet rags, fresh and dry leaves (anything I find that goes 'plop'). For the alien voices I used recordings of my voice which have been mixed with the NS1 alien sounds and the sounds of animals. All of these elements are processed and treated so that they fuse into what sounds like a single alien."

"At the start of this montage you can the hear the hive with its ultra low breathing sound and creaking as it hangs there, this sound was captured from in-game, and is a combination of 5 independent layers of sound. FMOD lets us use many individual sounds to make up a single sound event, so in this case the hive idle is using loops of different lengths and oneshot sounds that trigger randomly within given parameters, we did this so that the hive could be listened to for a long time without becoming repetitive, even though it has the constant in and out breathing you will not hear distinct loop points and repetitions as you would with a single looped sound."

Simon isn't composing the music for Natural Selection 2 (we keep him busy enough making sound effects!), but if you'd like you check out some of his work, you can do so here and here.

This is awesome. Too bad my laptop sucks.

At least I have my game key hanging up on the wall, right up in front of this hellish machine.

The sound effects are so amazing!!!

Im buying the 40$ one soon. whens alpha coming out?

They said "proud to announce that the alpha is coming soon to preorders" however that was Jan 5th and I think someone said something about they said weeks away but it is still in the air as far as I know. I can't wait for it xD

Hmm...
The real ambiance would be set up throughout the environment then, because you can't have one track with sounds in a area that might not make sense, like electrical sounds when there's nothing but pipes, glass, and metal in the area...

You'd wanna create many different generic ambiances for different areas, and have them activate at random when a player comes near, to sync with a main ambiance.

Awesome sound effects! i believe it is going to rock!
um...
Is the alpha available for those who purchase after the release of alpha demo?
I did not pre-order the game yet cuz i have never played ns1.
ps i like the sound of organs...? right? the flowing stuff something like blood streams..?