Today we have a render of the upcoming light soviet anti-aircraft emplacement, the M4 ZPU.

Today we have a render of a Soviet anti-aircraft gun, a quadruple mount for the Maxim M1910 machinegun, the M4 ZPU. 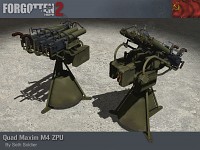 The ZPU was designed in the early 1930s and was adopted into the role of a light anti-aircraft gun by the Soviet military. It was mounted on the back of trucks trailers, armoured trains and ships. While it soon became apparent that it was lacking in fire power, it was never truly replaced in service during the war.

The 4 Maxims are mounted onto a supporting frame, and are fitted with a hand operated forced cooling system (the tanks for which sit in between the tripod legs). Our ZPU was made by Seth Soldier.