C&C 3: The Forgotten, the only mod that has an immersive story told with HD full motion videos, is ready to release more about its campaign. Included in this update are screenshots from the third mission, an artifact from the mod's story, and a new piece of in-game artwork.

The time has come to delve deeper into the story of our mod at C&C Labs, The Forgotten. We believe our mod is unique because while so many attempt to merely add to the gameplay, we seek to add to the fiction of C&C as well. That's why we're telling our story with full HD videos--see our theatrical trailer--and that's why we're proud to show off one of the missions from our campaign with you. For those of you who want even more about the story, we have an artifact, the first in a series called "Forgotten Fiction," to show off.

Mission 3's aesthetics were designed by the talented Predatore, a wonderful addition to our staff, while the fiercesome Nod forces come to life through Drummin's creative scripting. With a Red Zone this beautiful and intricate, pictures speak louder than words: 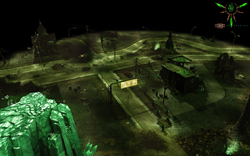 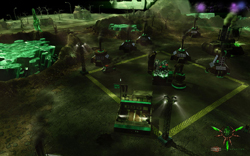 In the Forgotten base above, you can see the Training Grounds, created by Kane Nash. It will permit you to upgrade your infantry forces, the better to take the fight to the superpowers. You can see more images on our Media page.

Sometimes, missions, even missions with videos, aren't enough to give all the depth we'd like to our story. So for those of you interested in learning more about the mysterious Forgotten, we've begun a new series called "Forgotten Fiction." It's a series of artifacts from the time in which the mod takes place. The first one is the Morning Dawn Report, a short GDI Intelligence piece on an operation into the Red Zones and their encounters with the restless natives. Give it a look (PDF) if you want to learn more about our unique universe.

And finally, a help wanted request. We're looking for a talented artist to make cameo images for us (the pictures on the purchase icons), in a style similar to C&C 3's. If you think you have the requisite skills, email me (previous experience is very helpful). Now's a great time to join the team--we're about to hit beta for the project!

one of the best mods i have ever seen :)

with its own campaing vids whooot !!!!