By far the most frequently requested feature in recent months has been Load/Save. We've had a working save system in the console for some time for testing, which we're now happy its in a stable state. When you're in a game, simply press escape and hit save. When save is successful you'll hear a bright sparkle sound, and an error dialog will show if there was a fault. In time we'll add a text confirmation to the screen as well. Having saved a game, next time you start Folk Tale, the continue menu option will be enabled in white.

Speaking of the continue button, an overhaul of the start screen was long overdue. The new background is a place holder and in time we hope to replace it with a living village scene. Hopefully the refresh brings much needed modernization. We've yet to add background music, which I'll come onto next. We also took the opportunity to add a quit to desktop option, which had been missing for quite a while. No more forced quitting! 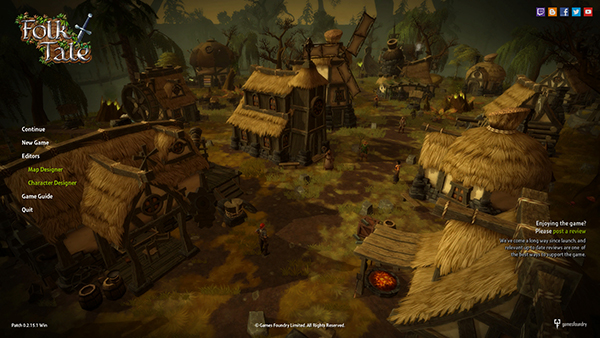 The old tutorial has long become tired and irrelevant, having deliberately not been updated since launch. Sandbox village building, economy and RTS controls passed it a long time ago. It was only the storyline campaign feel that differed. Now that the team is moving across to develop the RPG side of the game - the main delivery mechanism for storyline and questing - it's time to look to the future.

For months the Tutorial has been a dead weight on our shoulders. Firstly, early buyers of the game would often boot into the game, and fire up the old tutorial only to discover nothing had changed, since all the work was going into sandbox of which there was little awareness. It no doubt contributed to negative reviews. Secondly, every time we prepared a release candidate, the tutorial would require a complete play through to make sure we hadn't broken anything. That added several hours to each release cycle, and my threshold finally broke in February. Finally, we've had to write a lot of duplicated classes with similar names so as not to break the Tutorial. From a project structure point of view, it was getting silly. Retiring the old tutorial will enable us to clean up the project, and streamline some of the scene loading process.

For players still wanting to play the old tutorial, it remains available via an opt-in build on Steam.

Sickness provides another layer of depth to village life. Sickness can arise because of poor hygiene or diet, and depending on the rate of infection, can rapidly spread through your village. There are 3 types of sickness identified by mild sneezing, coughing, and projectile vomiting. Each type can be cured respectively by producing lesser medicine, medicine, and greater medicine manufactured at a Herbalists. 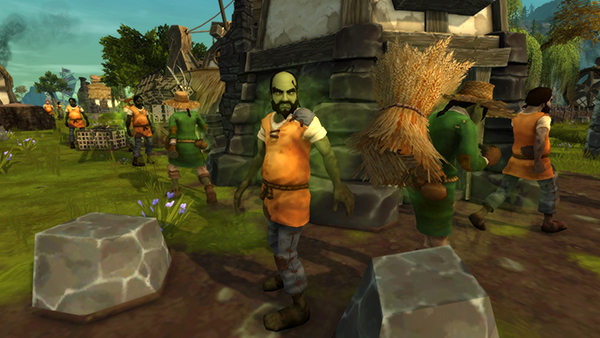 In the Workers tab of the building options, previously there was no feedback when you selected a Peasant for training. Now their portrait get added to the vacancy slot in the left column, and in the right column 'on his/her way' gets added until they arrive to take up their new profession. In time I think we'll remove assigned Peasants from the right column altogether, but for now it's a welcomed improvement. 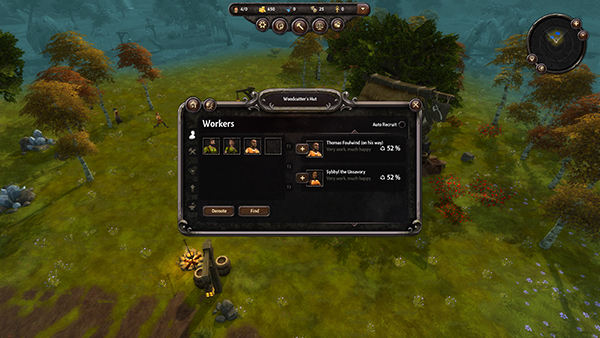 Throughout the UI we've added more tooltips with helpful advice on how things work, and this work will continue in future patches.

Watching community YouTube videos and streams, and from our own play testing, we noticed it was too easy to accidentally destroy buildings. To address this we've added a Yes/No confirmation dialog to prevent this from happening.

For players on retina and 5K monitors, and laptop players on small screens, the addition of UI scaling should be a useful addition. Being careful with finances, I went into an Apple Store and persuaded them to let me run the game on a 5K iMac (thank you Apple store staff!). Needless to say the fixed-size UI was minuscule, so later that week we implemented it without having to shell out thousands of dollars. Still, it's a beautiful piece of kit and in a few years when they give the GPU more power, I'd love to get my hands on one.

Over in the settings menu, we'd had community reports of frustration in the carousel behaviour of some settings - for example the UI scaling - whereby players would be wanting to max out the scale, but repeated clicking would cause the setting to loop back around so the UI would snap between maximum and minimum scale. On a 5K monitor, that's incredibly small, making it a little more difficult to recover back to the setting you wanted. So now options are clamped at their min/max and don't wrap around.

On OSX we'd received numerous reports of problems, and I'm pleased that we now have a fix for the crashing that was preventing some Mac players from enjoying the game.

A widely requested feature has been a way to find Peasants, usually when your village is larger and Peasants are a minority. We've always intended this to be available via the Civics dialog, but as an interim step the 'F' key shortcut now cycles the camera between Peasants. We've made it more functional than that however, and if you have a profession such as a Woodcutter selected, pressing F will cycle you to the next Woodcutter. Pressing SHIFT+F will expand your current selection to also select the next profession.

Characters are now easier to see at night and in dungeons, as we added in day/night emissive values to the Ambience system. This allows us to adjust the emissive values of characters per biome. In bright outdoor locations, we can pull this right back, whereas in dark dungeons we can ramp it up.

Anyone with a gaming PC constrained by their CPU (aka CPU bound) should experience an improvement in frame rate of up to 18% in Patch 0.2.15 after we moved the distance culling code to it's own thread.

The Tavern can now sell Mead, clearing the way for enabling the need for Entertainment. Several members of the community had reported issues of being inundated with moaning peasants, and finding it difficult to get past that stage. To improve pacing, we've tied several events to your village's culture value. For example, the need for Basic Clothing now kicks in when culture passes 150. Sneezing sickness doesn't start until 200, with more serious sickness at 300 and 400. This provides for great pacing as new players can learn the ropes and won't get overrun too early, while experienced players can rapidly expand and hit the challenges far sooner.

As we all know, Firewood was a borked in earlier builds. Peasants would burn through piles of the stuff like crazed pyromaniacs. It also made crafting at the Blacksmith very very difficult, since Firewood was needed as a crafting ingredient to fuel the furnace. So we've eased back on things and regained control so it's not quite so rampant. There's still some more work to do, especially when a village gets to 40+ inhabitants, but we're getting there. Not wanting to make things too easy on you, we've increased the rate of firewood consumption in colder climates, namely the hard map.

With the clearing of resources came the new problem of desolating the environment and having nothing left to burn. We've added a lot more trees and doubled their yield as an interim solution, while working on giving Woodcutters the ability to plant sapling that will grow into trees.

Bread baking was also fubar, but is now fixed. We're noticing players are placing Windmills but failing to complete the economy chain with a Bakery, so we need think more about how to raise awareness.

If you watched resources come in and out, you may have noticed that production of finished goods such as Meat Pies and Bread was batched up, and would only start when there were 20 flour/meat/whatever at the building. This lead to pent up demand causing Peasants to bum rush as soon as a batch of goods became available. So we've reduced batch sizes and increased the production cycle speed so every few seconds a newly finished good will pop out.

Spider Dens won't now wave attack until your village has a culture value of 200. We've also moved the spider dens in the easy map further away from the village, as plenty of players are complaining it's too difficult, which is fair enough for a map that's labelled easy! To help defend your village we've made the City Watch tougher, doubling their health and starting them with 10 Armor so they have some damage reduction.

Over in the Editor we silently went about cleaning up a lot of duplication, removing terrain tiles from Grassland, Swamp and Snow Kits and consolidating them into the single Core Tiles kit. Doing so reduces the amount of effort involved in adding new tiles and potentially reduces memory consumption slightly We included auto-migration code so that all Level Designers need to do is open up their maps and save them out. All their tile pieces will be automatically mapped to the new kit. We've also done the same to lighting, moving torches, sconces, braziers and camp fires in to the Lighting kit. However, each biome kit will retain it's own flavour of lighting where it is part of a faction environment, such as the Werefu Monk Monastery lighting props. 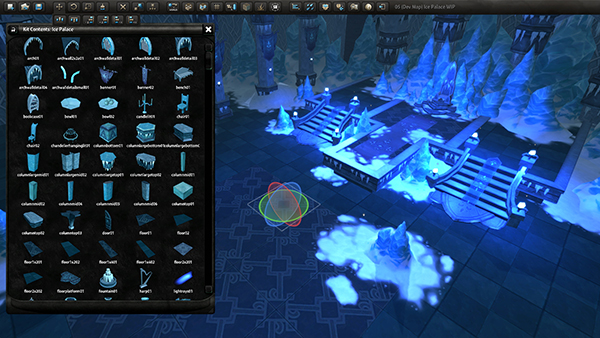 You may have noticed we also snook in the Ice Cliffs and Ice Palace kits, but without a reference map. In Patch 0.2.13 when we released the Classic Dungeons Kit, we added the Crypts Level 1 map as a reference. Unfortunately players started playing this and reporting bugs. So to avoid that, we'll publish a reference map via the community forum when its ready. Once we've got more of the RPG mechanics implemented, then we'll start rolling out adventure maps.

In the Inspector, we added the ability to override snap settings, and added toggles for prop locking and camera colliders.

Screen Space Ambient Occlusion ("SSAO") has been upgraded to a much faster and higher quality shader. We had thought it fixed the AMD card issue, but that fix seems patchy based on community bug reports. We're investigating both this, and the rapid reversal of the rollout of DirectX 11 support. Turns out there was a known Unity engine issue which has received a bug fix in 5.0. We're currently using Unity 4.6.3, but we expect the same bug fix will make it's way into the next engine update, after which we can try again with our DirectX 11 rollout.

What Are We Working On Now?

The Quest Designer is a key framework piece for delivering the RPG aspects of gameplay, specifically storyline and questing. We're working on implementing a node-based quest designer into the Editor capable of supporting branching dialog. It's going to take a few months to get right, with the first test being a starter tutorial to help ease new players into sandbox.

Heroes are progressing well, with work nearing completion on their special ability visual effects. They should soon be ready to add into the build, and in time will play their roles in the storyline.

We have a factional Behemoth in production - our first Dragon - and will be revealing that in one of the Dev Hangouts later in March. It's currently in animation, and as soon as it's available I'll be publishing our first faction pages onto the website. Factions are again a large part of the RPG aspect of the game and storyline, and parallel work streams are driving that content forward including factional loot icons and 3D weapons.

We'll be taking a closer look at plans for the RPG side of the game in the next blog.