Welcome to Folk Tale Dev Blog 28, and our first look at the new Toadkin race.

Welcome to Folk Tale Dev Blog 28, and our first look at the new Toadkin race. As inhabitants of the swamp lands, Toadkin are the natural opponents to the Goblin race. Once we add the quest designer, we'll be pitting these two enemies against each other, and the decision of which to befriend will be up to you. As a sentient speaking race, it's going to be an interesting task for the script writer, voice actor and the sound designer to deliver their dialogue. 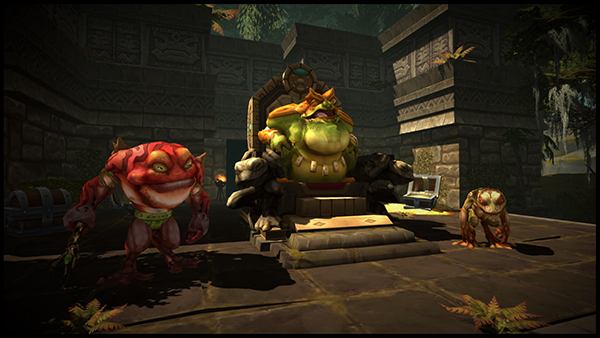 Toadkin society is patriarchal, with the King protected by the Warriors, overseeing the smaller workers that do most of the labour. 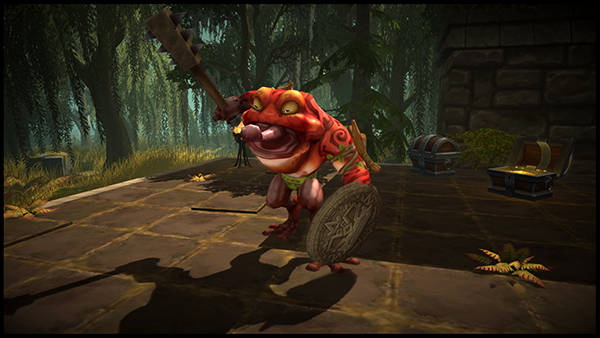 Toadkin are inspired by ancient Mayan culture, and this is reflected throughout, including architecture, armor and weapons, and the loot items that they'll drop. Here are just a few of the loot items that you can expect to gain from your encounters with Toadkin. 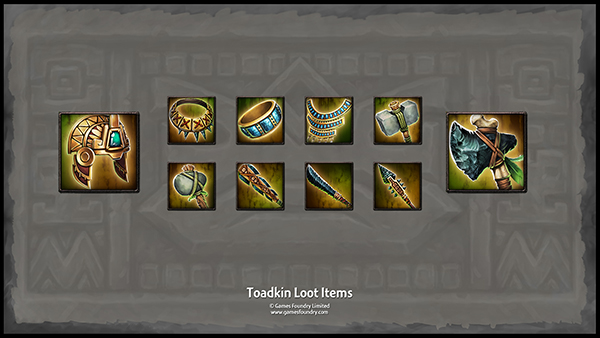 Earlier this month we released patch 0.2.10, including two new swamp kits which you can see in the images throughout this blog. We'll be continuing to add to the swamp kits with the inclusion of the Goblin Architecture Kit in a future patch. 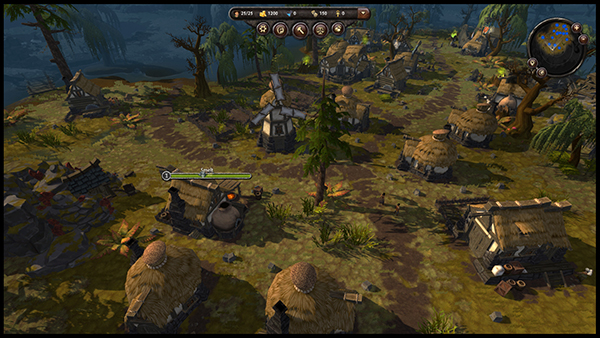 The soundtrack accompanying the blog video features tracks from the Swamp biome. All of the tracks for all biomes are now complete, and we'll be releasing the ultra high quality Official Soundtrack as DLC at the same time as Patch 0.3. We hope to expand the soundtrack as more tracks are composed to accompany the cinematics that will go into production next year.

One of the significant additions in Patch 0.2.10 was the ranged Arbalist profession, which you can train at the Barracks along with the City Watch. Using control groups which we've added for the next patch, you can now quickly select and command your melee units into combat while keeping your ranged units at the rear. 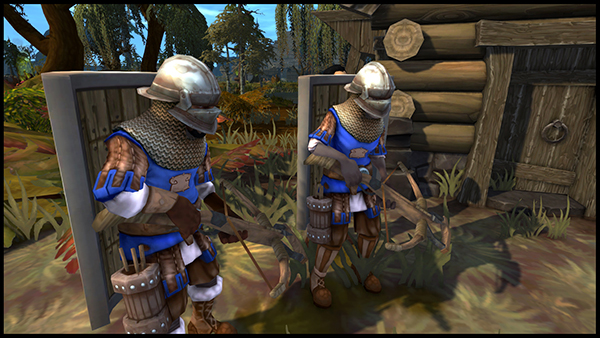 Using the new console we can add one of every item to my global inventory to demonstrate gear attributes. Using the inventory filters I can show only the items I'm interested in. Equipping armor now modifies unit armor ratings, increasing the damage reduction effect when they take physical damage. Armor effectiveness varies by type and rarity, and in Folk Tale we'll have Cloth, Leather, Chainmail, Scale mail and Plate. 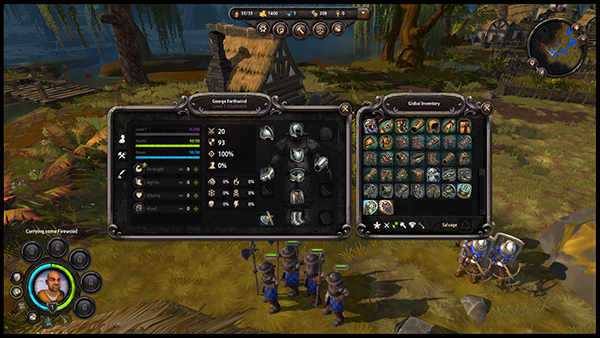 In Patch 0.2.10 we also added the prototype of the special abilities system. While special abilities will be used by heroes, for testing we've added some of the early prototype effects to the staffs. The Cursed Staff has Fire Shield, a passive aura that inflicts fire damage on any opponent caught within the area of effect. The Amber Staff has a mass heal spell which is activated by clicking on the button on the character portrait wheel. The Emerald Staff has a passive heal over time aura that replenishes the health of nearby friendly units. And finally the Staff Of The Dead has the targeted Firestorm spell, Life Steal, and Electrocute. We'll be improving the look of these abilities in time, but for now they are fun addition to play with. 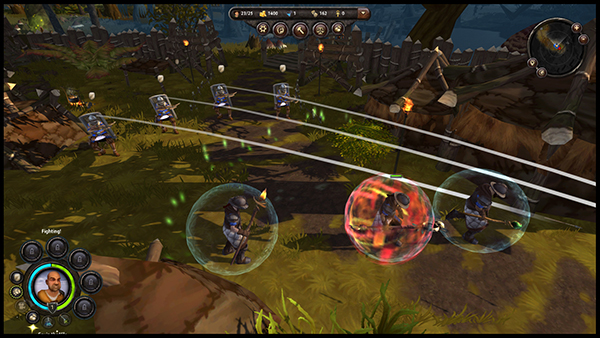 While we're on the subject of the character portrait wheel, in Patch 0.2.10 we enabled the Auto-AI toggle. When Auto-AI is active, characters will go about their daily work routines. For the Hunter, this was problematic in previous patches when you wanted to use them as a ranged scouting unit. By turning off Auto-AI, you can now do that, and the Hunter won't return to work duties until you tell them to.

For the next patch, we've added Guard Mode, very useful when you want military units to guard key locations such as your city walls and gatehouses. When Guard Mode is activated, characters will diligently guard that spot, only attacking units that come within range.

The Swamp Ruins kit included in the last patch is specifically designed for creating Toadkin habitat. While we were testing the kit, we decided to indulge level designer creativity by providing props for creating interiors. While future Dungeon Kits will specifically cater for interior locations, we're interested in experimenting with the help of the community to understand how such kits might be used. 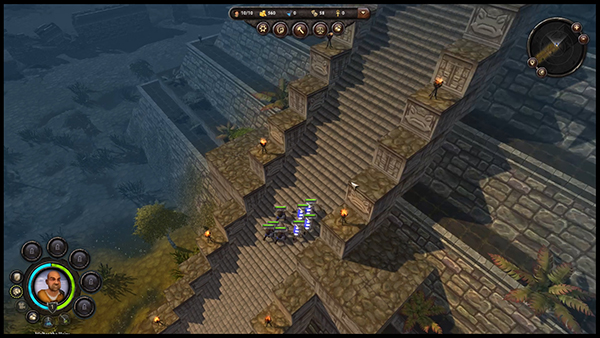 Jumping into the Editor, level designers will hopefully be pleased with the addition of the new swamp kits mentioned earlier, and also the Colliders Kit which includes invisible camera colliders and navmesh cuts. Camera colliders prevent the camera from entering areas or passing through walls, while navmesh cuts prevent characters from walking through certain objects such as sign posts. While most props already include colliders and navmesh cuts, there are special cases where level designers will benefit from being able to place these manually. 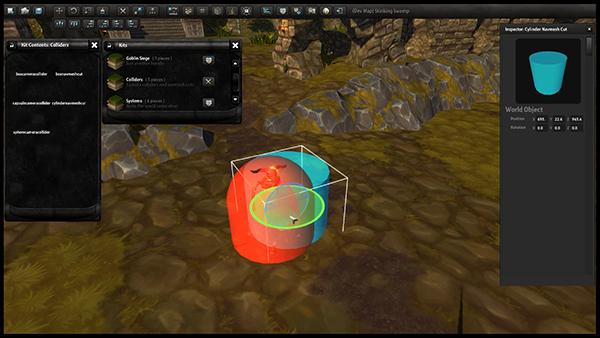 If you're interested in keeping up with the latest developments, as well as sharing your ideas with other friendly community members, the Sunday Dev Hangouts are well worth dropping in to. For more information, please visit twitch.tv/gamesfoundry and follow to the channel. The broadcast times can be found towards the bottom of the channel. Hopefully I'll get to chat with you soon.

As with all of our dev blogs, I'd like to finish by thanking everyone in the community who continue to support development during Early Access. Until next time, bye for now.