Alpha 03 is here! Click right there! CLICK IT NOW.Changes from Alpha 2 include individual sounds for each bullet type, sounds when an enemy is hit, sounds when the flash b-you know what, sounds. There's a lot of sounds now. There's also a jobs tab on the map screen, which shows all current Jobs the player has. At present, they involve murdering things to or from places.Oh, also there's map coordinates. So you can tell which planets you have to go to murder things. 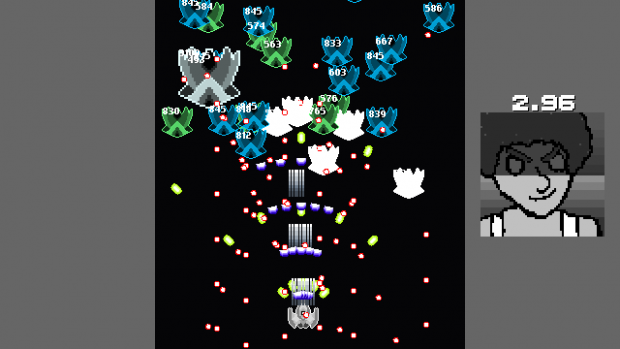 Also Cooldown.The largest change is, quite possibly, the collision detection change. You may be able to spot it in that above image, but the ship core (those four white pixels in the center,) is partially obscured. The core must now be COMPLETELY COVERED in order for a hit to count. Have fun just barely scraping by!The second largest change is bullets and how they're rendered. Your bullets are bigger, and everybody's bullets are more chunky when rotated. Partial transparency is for suckers.

What's the best bet for the next build?

I make no promises, other than it will be (more) awesome.