On the 2nd flight there are others... gets kinda crowded... uhh... Hey, flight control, what's going on?!

Things have progressed, and now there's 8 ships in the game for some testing and stuff. Now they can appear in the levels in random size and have some other properties different depending on their size. Player can change the ship too. At the moment the ships have different max velocity, acceleration, air and liquid friction. Some move faster in liquids than in air.

There's some mine thing, that for now is used to spawn the enemies into the level, but later on, it would probably be an explosive mine. Appear in the levels as a neutral hazard or left there by player or the enemies.

The third person view is changed from whatever was the default in DarkPlaces, and replaces the first person view completely. Now you don't get a closeup of your rear end blocking the entire view when looking up. It had a bit shaky turning at first, added some kind of smoothing, but it makes the camera lag behind a bit. There are still a few situations where the camera might end up slightly outside the level, allowing player to see through walls. 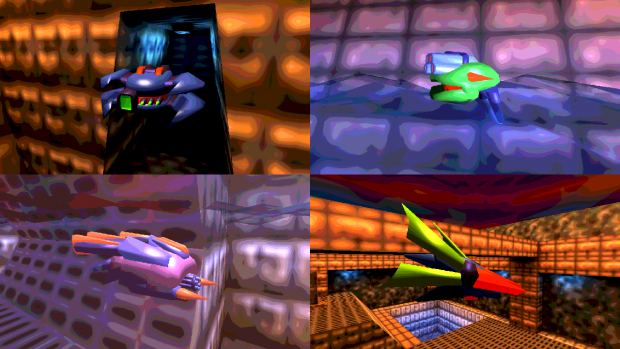 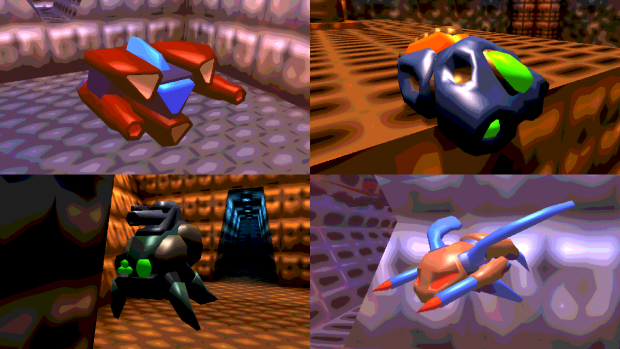 The ships from left to right, top to bottom, what I've thought they could be:

Bat: currently the "default/average" ship. Equipped with a plasma cannon and poison needles.

Dragon/Snake/Plant?: likes swimming and has a quad pulse cannon.

Shrimp: another swimmer, could take a bath in lava? Comes with a vulcan cannon and mega missile launchers.

Butter/Dragonfly?: flies fast, but don't dip your nose into the water. The heated blades cut enemies like hot knives through butter.

Tick: sneaky little bleep got a railgun and who knows what else!