I’ve been working on the Farmers village placement – placing various objects such as buildings, props and loot on an island. This was already showcased in our previous Youtube dev video. To spice things up I’ve also added various props for villages, to enhance the whole aspect of having a primitive type of friendly NPCs. An example of this are harvestable corn, destroyable barrels, interactable squeaky doors and cozy firepit. The same will follow with our second “clan” of people, called Techies. They will also have the same set of buildings and props but with a twist.

Dungeons are coming to life

It’s been a while since I started working on the dungeon system. You can check out what will the dungeon be by reading our Devblog 33 which explains its concept. In it we mention the first steps on how the dungeon generator will actually work – creating rooms and corridors then connecting them together. The first dungeon style will be a cave-like dungeon. Andrej created new cell objects which can tile correctly. The result is nothing special but it’s a foundation for everything else. 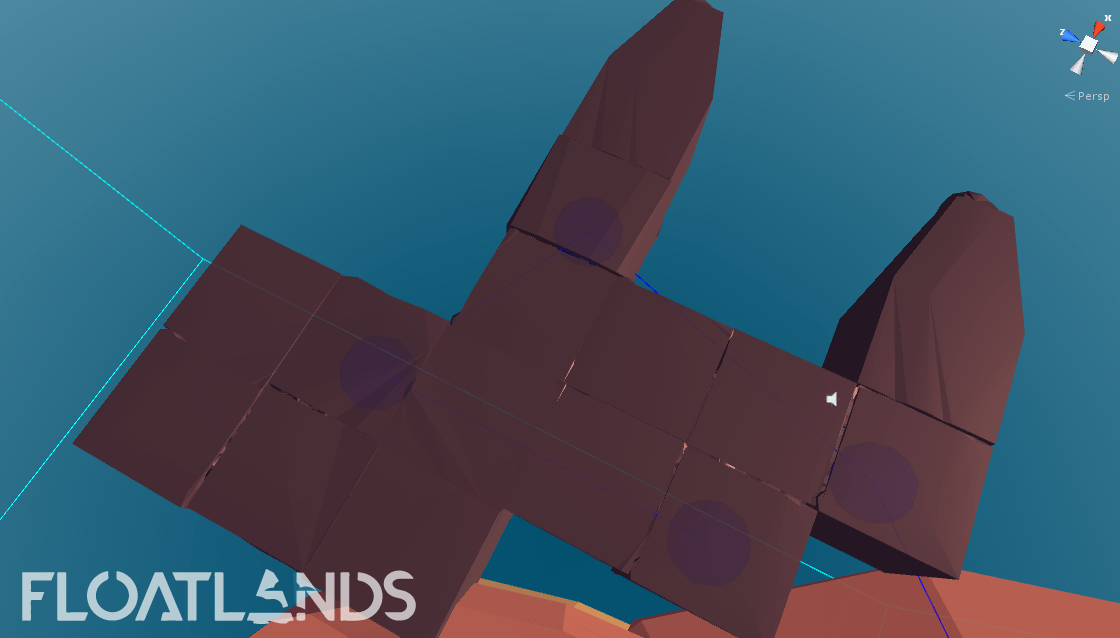 The next thing was to add vegetation and set the overall looks for caves. I started thinking and researching about vegetation in caves (I know, it is not so natural to spot patches of grass in caves, but we really want to include life into every aspect of the game). I’ve made some rules where and how grass/moss and vines can spawn. I added some rocks and dripstones aswell and at last the puddle of water has also been added.

Overall looks of a cave system

Dungeon – cave and its ambient

I finished the corn I started working on last week, which has already been added to the farmer villages. The corn cobs can be picked from the plants and the plants react to the wind like other plants so far. I also made some new dungeon entrances that will lead into the proceduraly generated dungeons.

After that I started working on the Techies settlement buildings. So far I’ve made the greenhouse, where the techies will grow their food, and one of the houses. 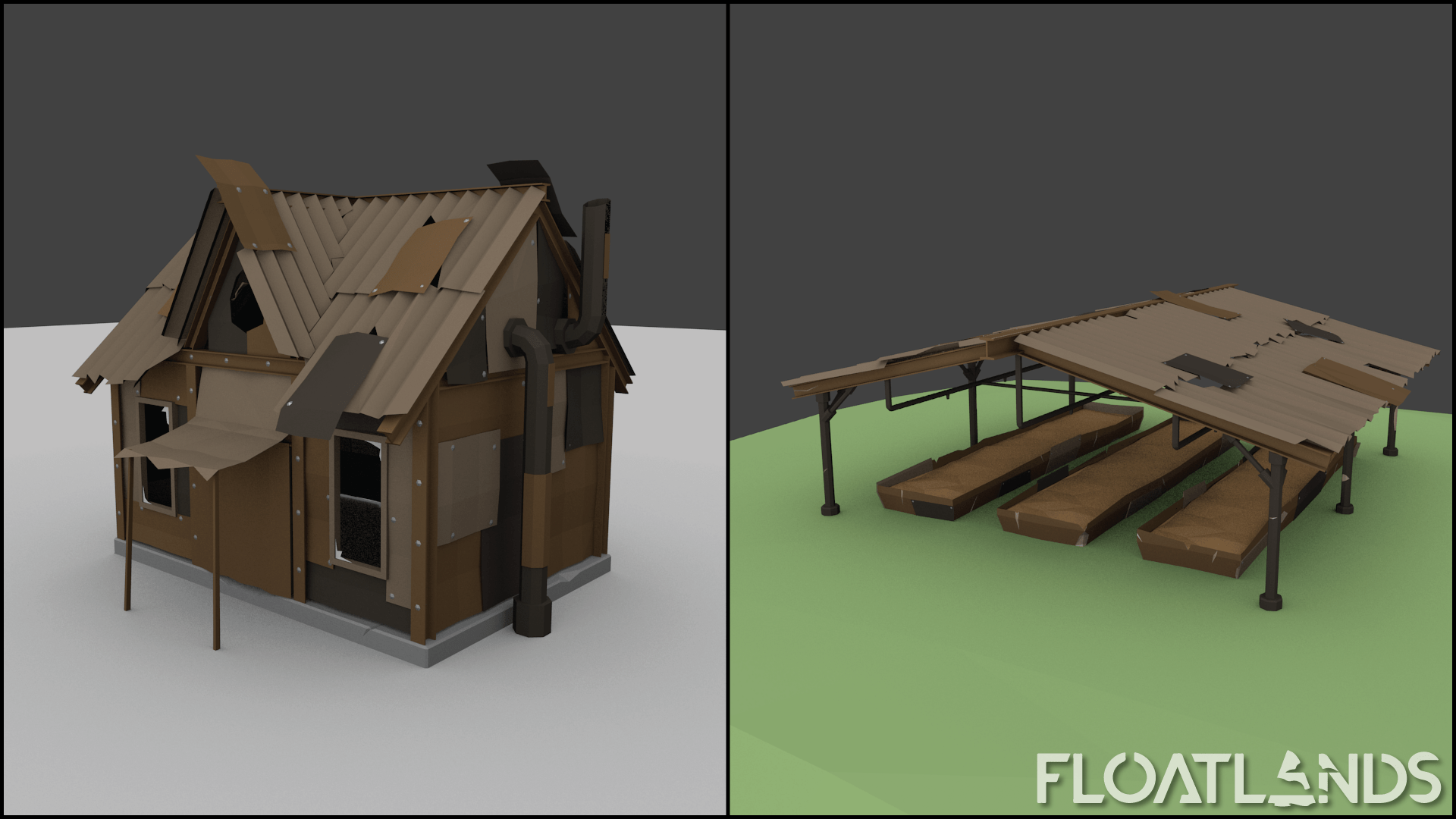 I am now continuing work on the devices that will plug into the electric system, and I made an animated healing station, that will activate and start fixing player’s robot character when he steps in it.

I’ve been refining electric system, fixing bugs, and adding new components. It’s possible to switch buttons now and add fuel to the generator. A lot of electrical consumers will be added and their style will also be refined. Here is first glimpse of generator, battery, switches, lights and some wiring. The system will be flexible enough to add additional elements on the go, we will just need to brainstorm an idea, model and code the new element and thats it. We think electric system will be a very fun feature of Floatlands. 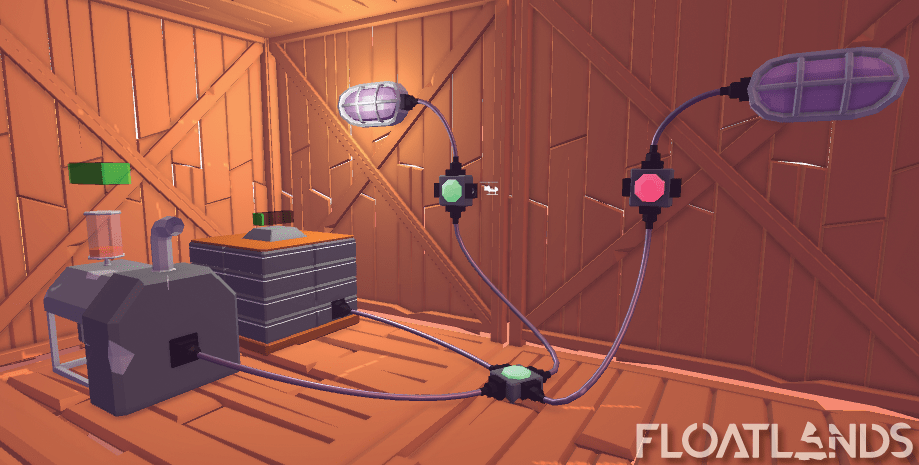 Below you can see some of the concept sketches for the Techies buildings that you will find around the world. They are constructed and carefuly fused together mostly from scrap materials they could gather. Strong metal foundations and steel plated walls are often reinforced with thick layers of metal plates to protect the inhabitants from the outside world. 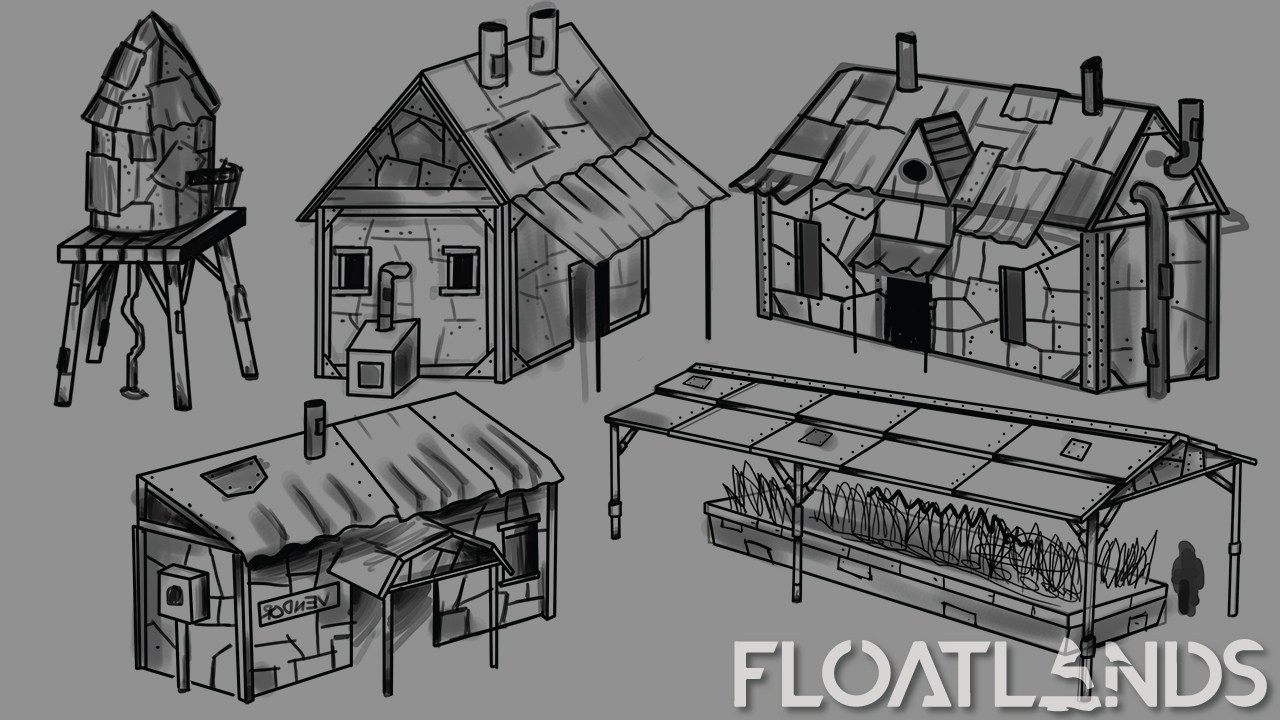