Our work continues with revamping the furnace, electric system and new buildings for villagers.

Furnace is a ‘machine’, that converts primitive materials, found in the world of Floatlands, to a more uncommon one. This conversion is defined by internal recipes and it takes time to produce.

We have already added furnaces in the early stages of the development. Check them out HERE. They were obsolete and their design didn’t fit properly with other objects in the game, so we managed to recreate a furnace model with rewamped background functionality. We also added new particles for the furnace as seen below:

We’ve seen a performance drop whenever you wanted to drop a lot of items from your inventory. To optimize this I’ve created a world item stacking, this means that nearby items with the same ID get merged. To add a sugar on top of it, I’ve managed to increase the size of a stack – the bigger the stack, the bigger a certain item is in the game: 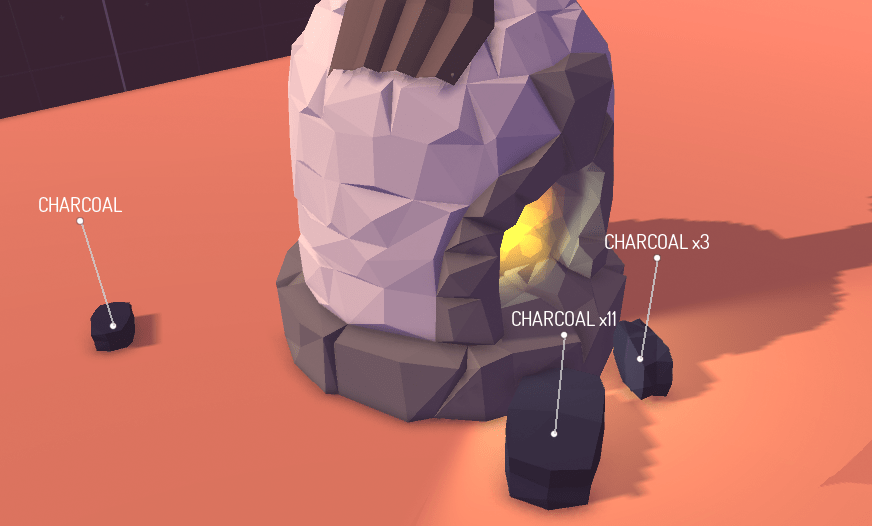 In preparation for adding humans to Floatlands I started modeling buildings for their villages. So far I made two barns, water tower, granary and a central firepit. 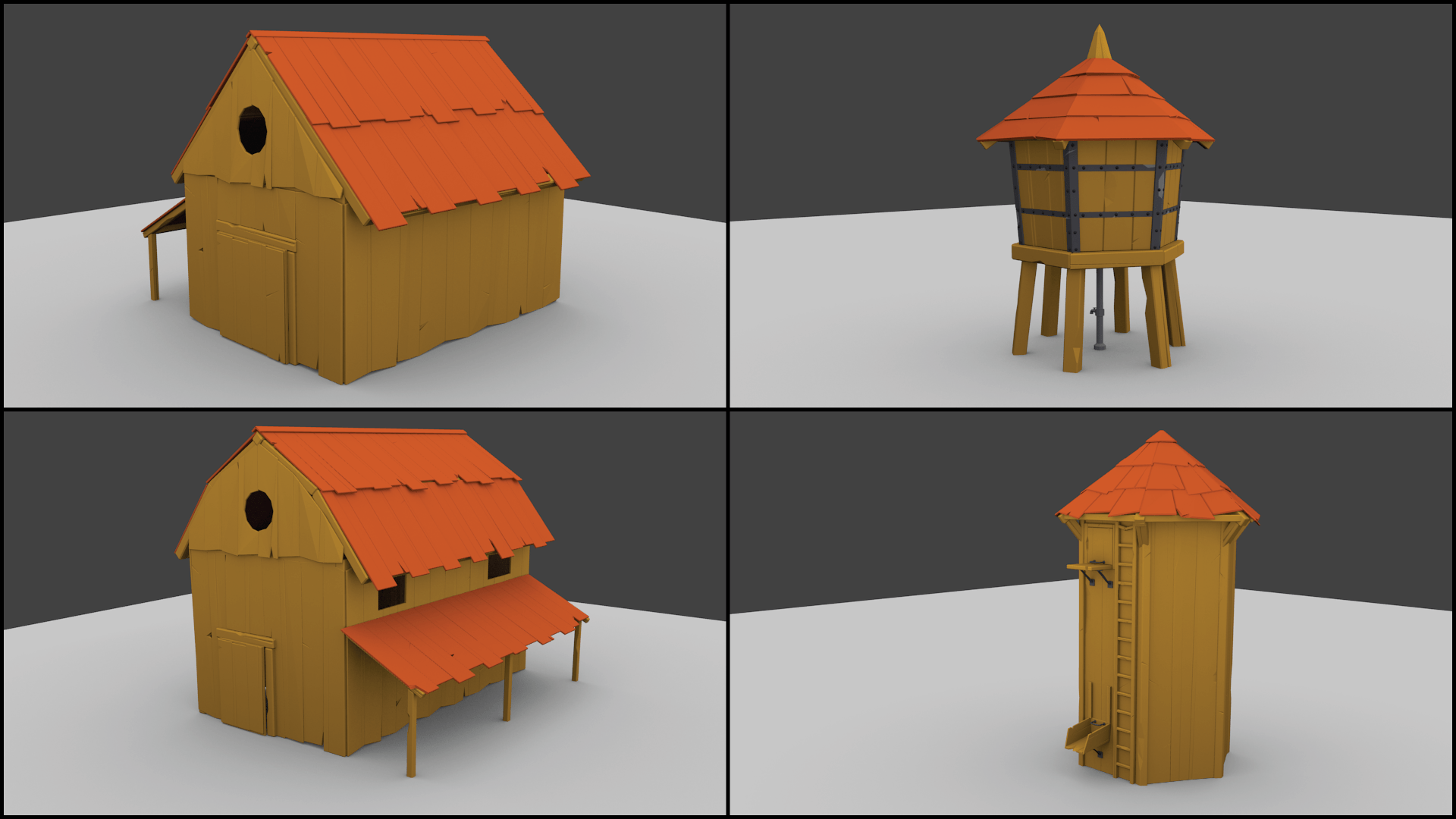 When making models for a game we also need to make LOD models (levels of detail) which get swapped when the player is further away to save system resources and so the world can be fuller. I start by making the most detailed model first and then copy it and start removing details in two ways – by hand and by using modifiers, depends on what works best for the given model. 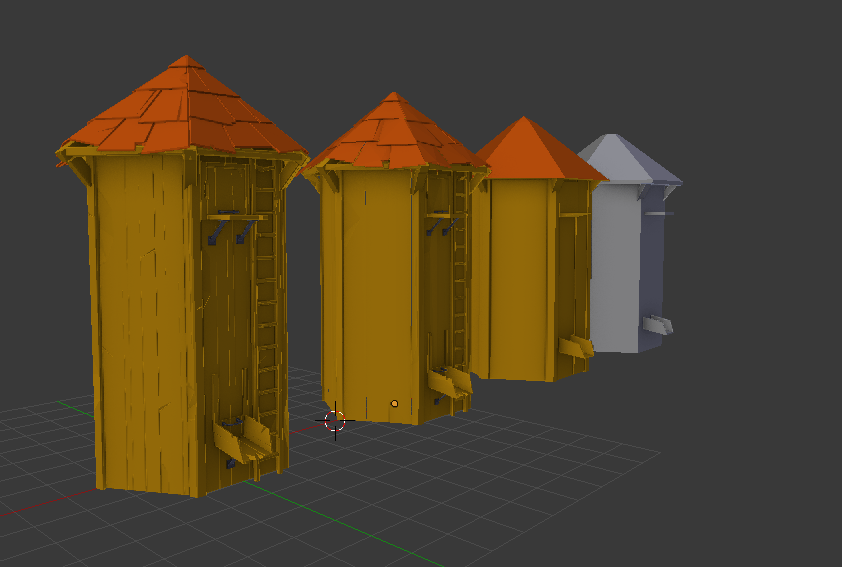 The last LOD is usualy made from scratch, since it’s usually just the general outside shape. After that, larger models like buildings also need a collider model, which is an optimized mesh that serves as an approximation for the physics engine.

We have decided to rewamp the electric system used in the game – you can have a look at our initial electricity implementation with generators HERE. Our new direction is to have cables and the whole system will be more dynamic as well. I was mostly designing & planning though, so not a lot of programming was done. Still, I managed to finish up the cable connectivity – the cable is done with cylinder bending shader (wrote by ‘Metapyziks’), bending is done with cubic bezier (4 control point). 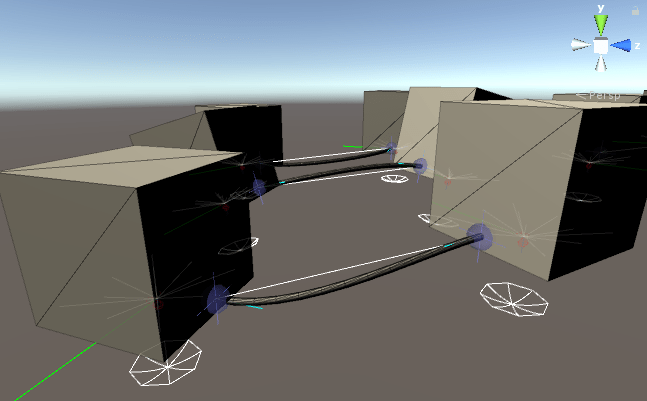 I also added capsule colliders through the existing cables, they are needed because cables will be destroyable (either in build menu or by a player raiding). Still lots of work awaits though, I have drawn some technical sketches of electronic devices, those sketches will then be retouched by Mito and finally 3D modelled by Andrej. 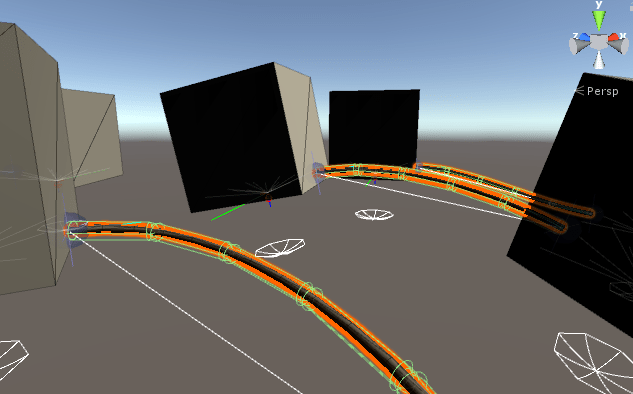 Is it planned to improve the tree cutting system or is that final? (for the next few updates at least)

Tree cutting system is fine, the clip was rather short and didn't show the particles when a tree is cut down. What don't you like about it?