One year has passed since our first beta went public, that was fast! It's still the same game in some aspects, but many things have changed and many more will do shortly. You knew Fistful of Frags as a multiplayer only modification and that will be no more when beta 2.5 is released. A co-operative/singleplayer mode is in the making, here's some info:

Would you like to take a look? This video isn't very elaborated but is enough to showcase an intense assault which involves around 40 NPCs and only one human player. Watch in HD quality recommended.

Regarding this co-op matter, we are looking for level designers to create missions for our new mode. The Wild West presents many opportunities to create a great co-operative experience, but we cannot do that alone. If you are interested contact us here please.

If this isn't enough for you, wait, there is more! Winchester 1893, the granddaddy of all pump shotguns, will make its presence in beta 2.5. It's a relatively late weapon for wild west era, we know, but makes plenty of sense gameplay wise and be sure is a hell of fun too. There's also the new map fof_loothill, it plays better than looks and looks great as you can see. Player speed will be faster too, there will be some weapon balance as usual. We are also removing the slot restriction so 32 slots, the engine maximum, will be possible in a few maps for the moment. Finally, deathmatch classic will be introduced in some maps, players will have to find weapons and power-ups around the map instead gaining notoriety. 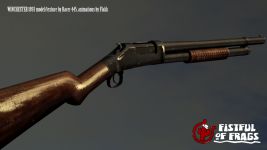 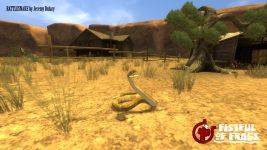 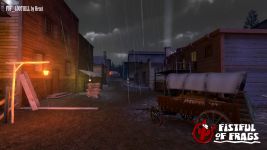 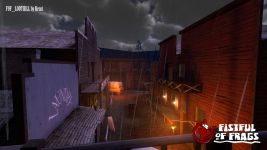 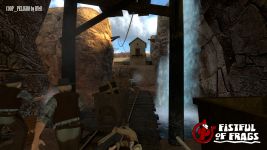 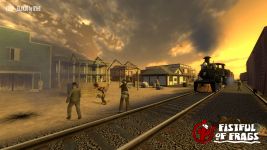 When should you expect the new release? It'll happen around February, most probably, just around the corner. You also may join the public testing we are doing from time to time, step by our forums.
Hope you like the new additions, if that's the case you only have to do something for us: vote for Fistful of Frags!

I want to use that shotgun.

The game from that video looks great. So you can heal teammates by giving them a drink and fire arrows with bombs attached? Awesome. I like those additions.

This needs to be Steamed, NOW

Nice work!, definitely agreed, I also think it should be steamed.

AWESOME!
You suprised me with that snake RYell ;)

"Player speed will be faster too.."

I enjoy this mod, I play it from time to time, but now... now, HOLY CRAP! You've taken it to the next level! Coop? COOP?!! I LOVE IT! You guys freaking rule, I can't wait for this and the AI seems pretty good already.

Nothing less then perfection. I tip my hat to you.

Great stuff, cant wait to see this in game!

I was checking out the trailer very good job looks exciting

This mod is epic!I am looking forward to singleplayer mode,because most of singleplayer wild west games are crappy

huh oh yeah i forgot about this mod

I cannot wait to pick random fight with 'em :)

Snake would most likely be in the next (2nd) 2.5 release candidate, as only 2.1 is the last public released version up to date ;)