The new version is meant to debut in a couple of weeks, prepare for an avalanche of changes and additions.

Beta 2.5 won't be a simple update, the whole mod has gone through a very noticeable transformation with two main purposes: removing anything that could result annoying, especially for newcomers, and adding new features to improve Fistful of Frags as much as possible.

We try to maintain our most distinctive and enjoyable features of course, while many things that weren't resulting as good as planned, or caused slow/repetitive/unfair gameplay, have been removed. That means the changes affect pretty much everything: notoriety/equipment, player movement, weapons, levels and game modes.

There is a risk involved in so many changes, isn't very usual, but we always felt Fistful of Frags have the potential to be a much better game. So let's hope this new version gets the approval of more people than previous ones did. Here is a brief description of what you'll get pretty soon, around 2 weeks:

And finally, some media showcasing our new Mexican bandit NPC, an awesome character made by Brad Myers. Also take a look at the Gatling gun meant to be used by the AI in co-op levels. The co-op mission is about pushing the mine cart through a level full of enemies. 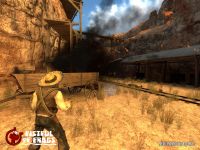 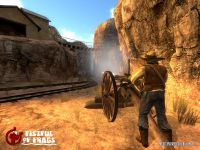 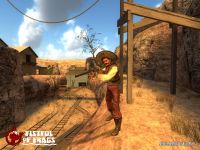 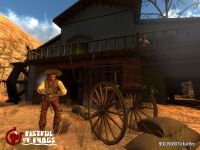 Im really excited for the coop

Server option to ban any player who surpasses a kill:death ratio specified by server admin., this is meant to help newcomers play without the pressure of experienced players.

i have to agree. While it's a kindhearted thing to think of, it really just isn't practical. I don't want to find myself banned from a server just for playing well.

Agreed. And also, what about if you're in a country where you're lucky to get a low ping server, and then you get kicked for playing the game?

Newcomers shouldn't have a problem playing if the game is intuitive enough, while giving them some tips and tricks.

I tripleagree. Rape'em newbs. They'll learn it the hard way. Banned for being good?

No really, what the ****. FoF is just a generic FPS. Hope no admin will use this... except maybe for some noobserver.

Actually, it's a GREAT IDEA!

the kill:death ratio is kinda cool cuz pros and newbs will be sepperated from now on. Making this alot more fun.thot no more raping noobs :(

I Fourtell agree =P
It's like a kick to the ballz for old players...

Perhaps you didn't understood it well? It's optional, meant for "noob servers" of course, there should be a couple of those at least. Newbies and low skilled players have the right to play the game just against people of the same skill level. No more, no less, it's going to help for sure.

Excellent work guys. The characters are a vast improvement on the altered HL2 characters you started with. Well worth the effort guys.

Seems great, I'll love the coop mode... but as some people already said, the feature that allows a server to ban the good players is just stupid.
I'm a big fan of your mod, Keep it up!!!

Awesome update, sounds like a ton of fun. Can't wait to play the new version!

Awesome stuff! cant wait to have a lan in co-op mode!

You should've not moved to the OB engine. This is some laggy ****.

It's great, though, you update the features. It's awesome. Best Source mod ever, in my humble & biased opinion.

Great ideas, too. Got me all excited. Except for that cooperative play. Lol. It'll probably suck balls.

Keep it up, lads, you're doing wonderfully!

well its up to the admin guys. personally i tihnk its a good idea to have some servers for noobs, and as they said, its up to the server admin.

Never played this mod before looks pretty awesome now will download it.

"Server option to ban any player who surpasses a kill:death ratio specified by server admin., this is meant to help newcomers play without the pressure of experienced players."
That's what I was looking for, since I play online. And the rest of the features are very good. I can't waait. Guys, you rock!

Ive played this mod before, and I will definitely dowload it again if for any reason, the coop mode.
Awesome idea, cant wait.

been playing this all morning, is absolutely awesome :) loved it, will def keep track of you guys. I played this mod when it was first out and liked it, but now i was blown away keep up the good work fellas :)

The COOP is really fun, glad to see so many people enthusiastic about it.

Perhaps I'm a bit biased but I think co-op is fun too heheh. Worth every minute spent on it, however I hope people don't expect too much from it.

Every time I start fading away from this mod a little, a new version comes out that makes me jump right back into it. Keep up the amazing work guys, easily one of the best mods ever made =D and the constant updating with new content also proves that its one of the best mod teams ever.

"removing anything that could result annoying, especially for newcomers" The only thing I found annoying as a new player was that my team mates kept walking in front of me right when I was taking a shot. :p Seriously, this is a great mod that taps the underused setting of the wild west. Good luck!