Today we are showing off the AMD 35 armoured car designed by Panhard.

Today we are kicking off the new year by showing off a render of the Panhard AMD 35 armoured car, a favourite of both the French and then the Germans. 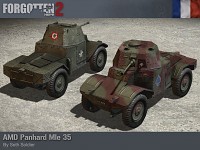 In 1931 the French Cavalry issued a specification for a fast reconnaissance vehicle with long range. In 1933, four companies had submitted plans for consideration, and in October that year, Panhard was the first to have a working prototype for testing, known internally as the Type 178. It would be accepted early the next year with the provision that some changes be made, despite being considerably overweight and oversized compared to the original specifications.

The AMD 35 had heavy armour for an armoured car at the time, and the 25mm SA 35 gun was easily capable of going toe to toe with German tanks. Powered by a powerful V4 engine mounted low in the rear it could manage 72 km/h on road, though its coilspring suspension and long wheelbase limited it offroad to 42 km/h. Like many armoured cars, it had a position at the back of the fighting compartment with driving controls to allow for speedy retreats.

Production of the AMD 35 started in 1938, and by the time of the armistice 429 had been delivered, with 124 hulls awaiting turrets. Production by the Germans would bring the total to 729. The AMD 35 was an extremely well made armoured car, and would see use into the 1960s. Ours was made by Seth Soldier.