This is our first Thursday update, rather big with lots of info.

Well our first Thursday is here! However this probably is delayed due to authorization etc but its the thought that counts!

First off, this update is big, we've got many things to talk about including a possible ETA for the Alpha, so go get a drink and prepare. 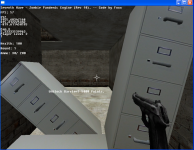 I've gotten a long way with the AI over the past week, we now have a full working zones system, meaning that we can now enable barriers to be unblocked etc, along with this we have the system for zombies almost fully worked out and half of this has already been implemented into the engine and is working well. As you can see from the image barriers can be purchased with points and this unblocks them allowing the player to advance.
Just so you know, the text in the Alpha will probably be better and/or replaced with a nice graphic instead :)

Along with barriers we have a system to check the players current level on the map, along with all the zombie levels. This means directing zombies to the players level is quick and simple and will not require a lot of resources. We still have work to do on this but its all going well and shouldn't take too long to finish.

In the Alpha the amount of lighting and physics will be minimal. We had problems with our lighting systems in earlier builds and we are still working on getting it to work, however waiting for this could mean the alpha release could take a lot longer than we would like, so we plan to simply ignore lighting for now and work on the physics for the game, we will however ensure that there is a low ambient light level throughout the alpha map to make up for this. We may also add some basic lighting to the alpha but nothing fancy. These things will be improved in the Beta builds, as they are not neccesary for the engine test and for the game to run.

In the alpha we will have a selection of weapons but not a full range as we have only modeled several of the full set and not all of the final models are textured and ready. I'm not sure on the final list of the weapons yet, but that will either be added to an image or included in the next update.

Our 4 special weapons will not be in the alpha unfortunately, we are still working on the designs for the most of them and thinking of how we can implement them into the system. Any ideas what they are yet? (Remember the hint?)

They will be revealed one by one by their creator and designer :)

We have decided to deploy the alpha via our own servers, we won't be putting a download on here due to the fact that this alpha is just an engine test, not a full release, it will probably not work sometimes too, so we don't want people to think it is going to be like this all the time, we will be putting our beta on here when it is ready but not the alpha.

When we deploy the alpha all our posts etc will have info on the builds etc in them, along with this after we release the alpha we will go back to posting a new update whenever we have a new build released. In the update will be all the changes etc and various info about whats to come.

So we have an estimate time for the ETA of the Alpha but we aren't going to say anything yet because currently something could go wrong and it could be delayed and like many companies we don't want to have to say "Sorry, we broke it, it'll be done later." we want to be able to say "We said today, so here it i!"
So we'll announce the ETA date as soon as we're sure we can reach it.