A summary of where I've started from with this game, and where I would like to end up.

As this is my first post about the game (and in general) it makes sense to outline
where I'm starting from with this game, and where I want to end up.

Humble Beginnings
Orderly! started out as a 48-hour game I made in Unity for Ludum Dare 31 back in December.
The game tells the story of a librarian, who was sent to hell ( because of being too naughty I guess).
In the fiery pits of hades she was sentenced to stack books until the end of eternity 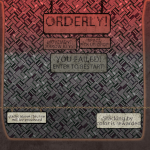 The game got some positive feedback, even though it had quite a lot of annoying
bits. I felt like I need to turn this into a proper game, and only recently I found the time to get my hands dirty.

I wanted to use the LD31 version as a starting point( something like a first prototype) and develop it to a quality, where it can be released on a web gaming platform (like Kongregate). If all goes well,
and the gods of game development are merciful, a mobile release is also planned. This is a relatively short term project, but during the development I want to get some feedback to make sure I'm on the right track.

Development Goals
The first prototype can be played here. For those of you, who don't have the Unity plugin or just don't
want to play it, I will outline what I basically have so far:

This set up turned out to be sub-optimal and there are a number of things that I
want to improve. Some of the things I want to work on:

Most importantly, but for now I want make it as good as I can myself, and possibly learn something in the process.

I've been working on the new version for a couple of weeks now and I've made some progress so far, but I'm going to touch on that in future posts as this is getting waay to long.