Whole first person system has been reworked, new animations added, new sword has been made (with special shader for blood) and there's also a new script that handles impacts from attacks. Check out my new video. 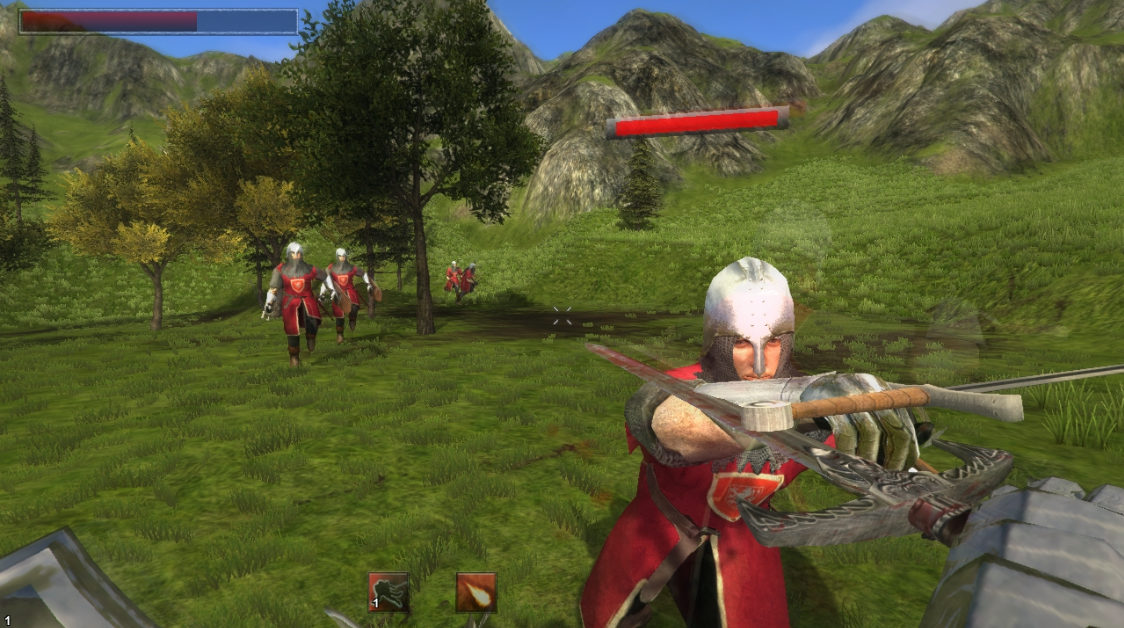 I've been working a lot on first-person camera and combat system these days. Here are some changes that've been made :

If you are playing as a knight, you have the posibility to choose which type of attack you want to use. It's basicaly the same as in other games (holding mouse button and releasing it will make powerfull strike, fast clicking will make faster but weaker strikes). Stamina is planned to be included in the future.

These new animations were neccessary for better experience while playing in first-person mode. Problem with the third-person animations was that player couldn't see his own sword and shield most of the time, especialy during attack.

Impacts of the sword with enviroment

This is just simple feature but with positive effect. You can hit everything in the game with a sword and there is a propper collision (for example: you hit a tree, sword will have collision, animation will stop and splinters will come out). And like I said, it's not a necessary feature but it's better to have it :)

this game looks amazing , hope there will be a nice story mode and will it cost
money

Looking good. This must have been an insane amount of work!

I understand this is still quite early stage in development but AI needs more work, especially the archers. Feels odd to be still in one place when you cut the the crap out of them.

Very first time I spotted this game. It has gained my attention.

I'm a massive M&B, Medieval and even Fantasy fan who loves a full on FPS experience with melee.

Watching the above video with various soldiers attempt to take you down I immediately thought of ideas that would substantially improve the gameplay (in my opinion at least). Forgive me if I mention ideas you already plan to implement.

1. Knock back. Both shield and from heavy strikes. Even a kick like in M&B would be nice. When such an attack connects the enemy staggers and takes a step back leaving him vulnerable for a critical and brutal strike (like a mini fatality of the critical strike sets health to 0).

This would totally allow the player to:
- Feel more brutal and powerful in any combat scenario
- Crowd control enemies as a tactic
- Enhance the experience of melee combat

You could even consider heavy 2 handed weapons causes a heavier version of knockback that and stagger the target's comrades if he gets pushed into them.

2. Killmoves. Lovely lovely killmoves. I know in a non 1v1 scenario it is unwise but if you allow the player to use it at his discretion and consider even giving bonuses for successfully doing the killmove it can both add a small factor to consider into the players combat strategies and further enhance melee combat.

3. Enemy taunts and animations. For example if one of the soldiers is too far ahead of his group perhaps he can lift his sword in the air and call to arms. Others who keep bumping into each other could instead start side stepping and implementing neck slicing gestures or yell "Surround him!". This can make the battle scenarios more dynamic and allow the enemy to be a little more tactical but also more manageable. Less clogging up too.

The game is looking good!

Thank you very much for your thoughts and ideas! I really appreciate it!

1) I have already made knock backing with a shield, it's one of the skills for a knight. I haven't used it in this video (because it still needs a better animation for first person mode), but you can spot it in one of my older videos (for example here) :


2) I agree, having killmoves would be great. But animating them would be quite tricky and hard... I will consider it later

3) This is a great idea! AI really needs an improvement in general (they have very basic behaviour now). And this type of behaviour which you have described, would totaly improve the game. I guess I need to focus on better AI now :)

Very nice work by the way! I love the action and the attention to detail in the armor, weapons and environments!

I love the recoil when you hit the soldiers.
Recoil can make all the difference in a fight.
I hope you plan on making a few other recoil states.
Maybe something like knocking them over, spinning 180 degrees when hit or even falling sideways.

Recoil and timing make a game feel so real

Sure, I'm aware of that. I'm planning to improve archers AI ( I will give them sword and when you get too close, they will start using sword instead of bow ). Thing is, I had no time to do that yet :)