I finally partially finished IDE for No Nonsense (I was planning this since I started working on this project).

So finally, it is here. I spend few last weeks only working on Nide (this is how new IDE for Non is called). First, I started choosing design and I decided to use Swing and WebLAF look & feel for it. Why WebLaf? Because it is awesome, very well done and polished layout. Only thing I miss from it is dark theme (which I am planning to create by hand later). Also, WebLaf is very well documented and it´s demos are awesome. And, at last and most awesome, it have built-in syntax highlighter. So, when I choosed WebLaf, I started working on some features. At first, I started with simple project loading. From this point, I added simple loading of project script files, then extended it to be able to create also new files and directories. From this point, base was done. Then I decided to add more features than just replacement for Notepad (lol). So I added support for previewing images and GUI-based editing of non.cfg file (what is used for basic Non-project configuration). So, here is final result: 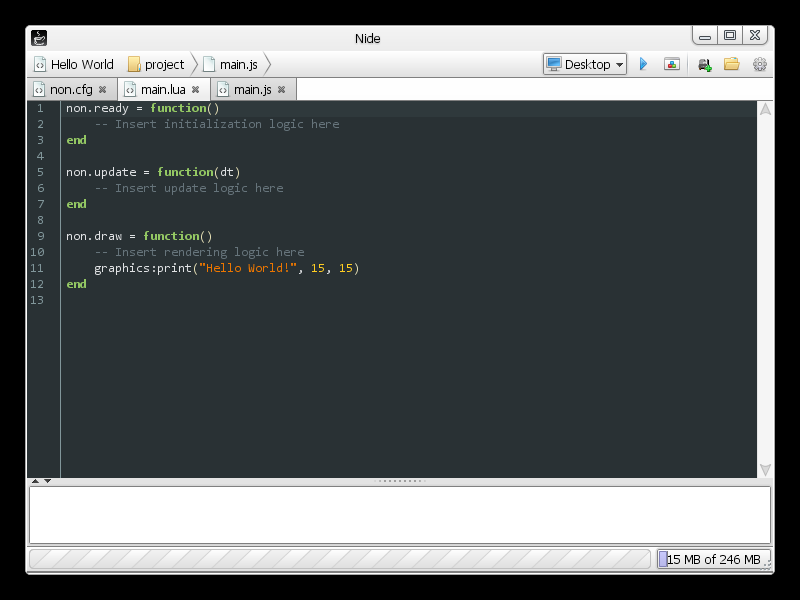 Looking great right? That text area at bottom is awesome console what will display logs from building and running Non projects. What? I forgot to mention it? Yes, one of Nide´s main features is running and building Non projects just like normal IDEs like Eclipse or Netbeans does, but in JavaScript and Lua. Awesome right? And net to that buttons, there is, as you can notice, button for selecting build target. For now, Nide supports these: