Some updates on Emergency Broadcast and a summary about the campaign.

First of all:
I updated the header a bit and added new informations, I hope you like the design. :D

Now for some real news about the campaign. Yes, it is still in progress and I am currently working on the mapping for map 2 - "The Streets" - (the end is in sight) and the concept of map 3. On map 2 the crescendo event and mostly untreadable buildings aren't finished yet. Also effects and details are missing and I want to include some more gameplay elements since it is kind of boring by now. Here is a little sneak peak: 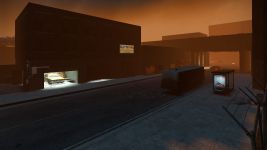 Still WiP so it looks a bit blank. So far for the mapping But I wasn't the only assiduous person. Reaping666, the music artist, is redoing his pieces with new software and new sound technology making the soundtrack sound even better and more realistic. You will hear some of this in the future.

When I am finished with the map and Reaping composed a sound for me I am going to make a video with some footage. Also I will post the updated storyline soon. You will hear something about this later.

In the end here is a summary of the campaign so far. The features and some other info that I didn't mentioned by now here at ModDB:

The campaign's name is "Emergency Broadcast" and it takes place in Newburg, the city from "Dead Air". We have been working since July 2009 on the concept and the development of the campaign and it's maps and we are still in the early development phase. "We" are a young game developer team called "Cranox Interactive" which mainly consists out of Reaping666, ShadowX and me. We all love Left 4 Dead and want to keep it up with new, good content. As I said we are a young studio and have therefore not released many games. We are trying to use the campaign as a start point for future development and to familiarize ourselves with the team-working and some engines and utilities.
Our goal is to give our campaign a good quality with the original L4D campaigns being a stadia rod in mapping, atmosphere and gameplay. We are attempting to reach this by using custom sounds and additional music (which fits to the original themes of L4D), new models and textures and spending much time on the maps and detailing them.

Maplist (These are the development names, the chapters going to get real names later):
Chapter 1: The harbour
Chapter 2: The streets
Chapter 3: The underground
Chapter 4: The broadcasting station
Chapter 5: The rooftops
Chapter 6: The train-station

Features:
- Playable in coop as well as survival-mode. Maybe later even versus.
- Scripted random events that force the survivors to change their plans or take an other route, which make every play-through of the campaign unique.
- Several alternative routes where the survivors have to choose their path. But the shortest one might not every time be the safest one.
- Many custom resources that includes new sounds (For example ambient or voices) as well as self created music for the campaign and custom models and textures.
- More small things such as a custom intro or survivor dialogues during the campaign.

That was our update on the campaign. I have got a lot to do on the maps since I am the only mapper but I hope that the campaign is still releasing on time for Left 4 Dead and Left 4 Dead 2.