Preparing a playtest while the game has no level and is not playable.

Let's do a playtest

After this first week where the development went well, I began to think about showing Ruggnar during a playtest.

Every month, there is an event around indie games (IndieGames Club) in Metz, France. It's a way to discover indie games either already released or still in development. And it's a way to promote games made by studio from the north-east of France.

The event was planned on October, 14th and Ruggnar wasn't even playable.

In order to have something playable, I needed to create a level. So, I wrote my level editor in Javascript. The main advantage is I can add new tools (like chest content) and use it in my engine or change the editor if the engine has new functionnality.

The first version has been made in one week. Each time I added something in the editor or in the engine, I tried it to be sure it worked in game.

Rudimentary, but enough for making my first level. 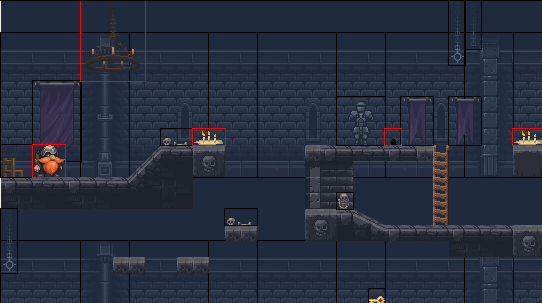 When starting the first test level, I learned how it could be difficult to make something challenging but fun to play. This first level is hard, but there is no impossible jump, no unreachable spot.

My idea was to put in this level every mechanics made so far. I know it's a bad idea, but it was a way to show the game, the mechanics. I took a full week to add functionnalities, create the level and do something the players could play.

I've tested every jump, every coin position, every doors, every spikes to be sure to have something fine for the IndieGames Club.

An evening of game

From 7pm to 11pm, players came to test and discover some indie games. That evening, there was Koloro (from Skoll Studio) and Neurovoider (from Flying Oak Games), two games from Metz, France.

A lot of players came this evening, and I collected a lot of feedbacks. The game have been well received. I get some very interesting ideas around the candle. For me it's the center of the game. Many players felt the same and talked about air, water and powerups.

This event was very valuable for me. I've seen people playing with Ruggnar, being enthusiastic, giving me advices, ideas.

If you have the possibility to do a public playtest early in the process, do it. It's easier to change some core mechanics at this stage than after a year of work.