Today we'll show you our first basic inventory which we have been working on for quite some time and the first two alien models (Ragon and Metraxi) whereas one of them will be your main enemy and on can become an ally.

it has almost been a month since the last update, and here I am to show you what we've done during this time.

First of all we've found two models which are fitting two of the six races quite well. Although we're not sure if we're going to use them I'd like to show what I'm talking about.

This would be the Matrxi, if you don't remember, this was the race which required protection against the sun on other planets. I think it fits quite well, but it hasn't got much similarity to our concept art. 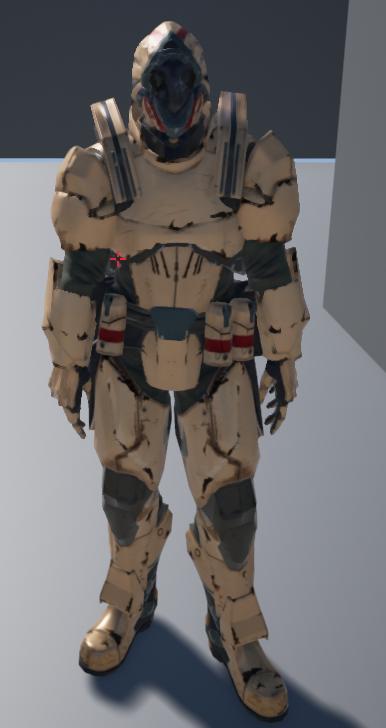 Same goes for the Ragon, your main enemy. It looks super cool, but it isn't quite near the concept of our writer. I'll see what he is gonna say and the I'll tell you what we're going to do ;)

The other big thing we've been working on is an inventory system. The base of this system was made by Wes Bunn and we're going to expand it to what we need. Luckily,the two most important things for surviving the arena are already working. I'm talking about food and fire, food so you won't starve and fire so nobody can use the darkness to creep up on you. 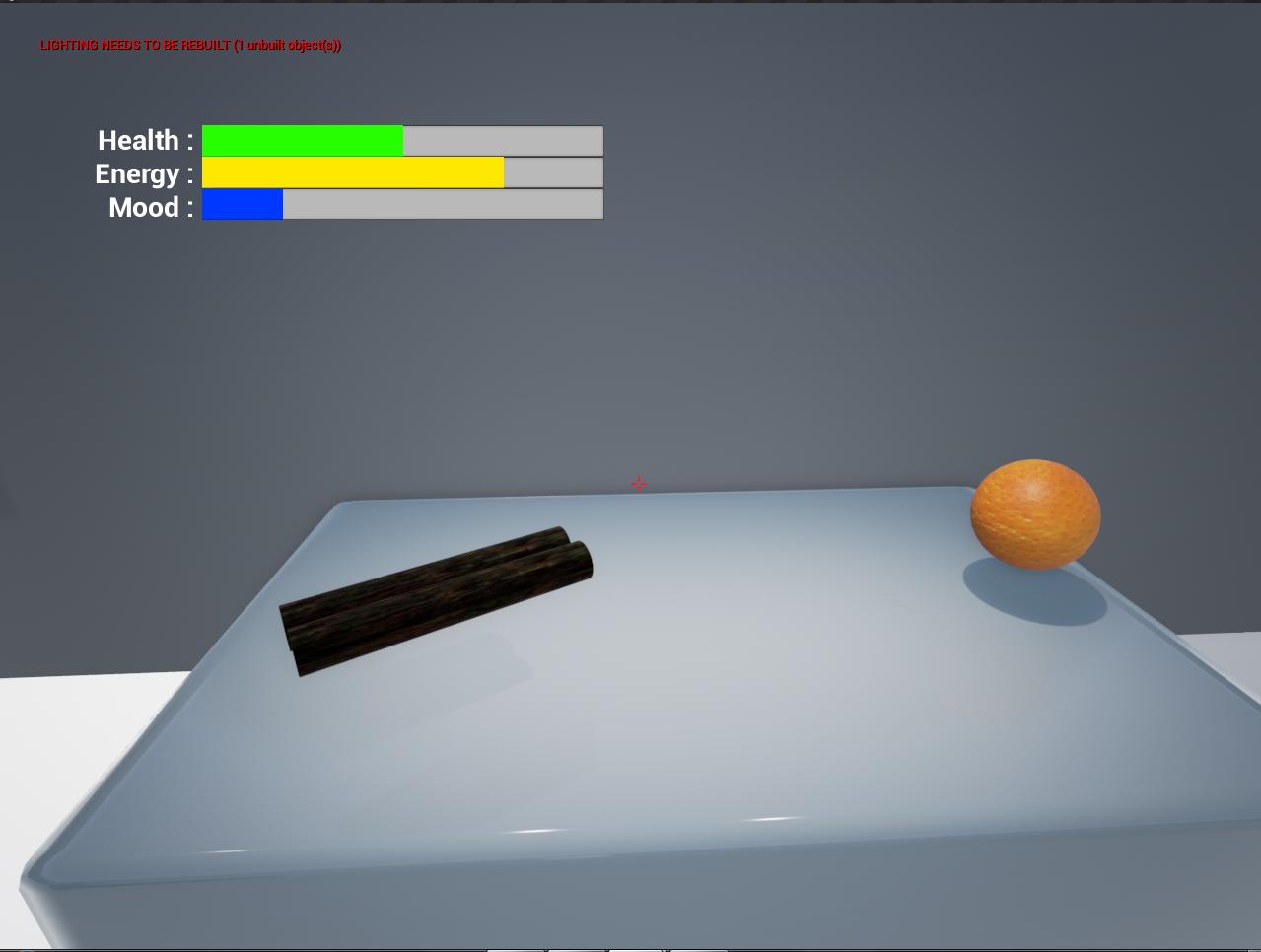 By pressing "E" on your keyboard you will be able to pick up those logs and the orange and by pressing "I" an inventory window will slide in to show you what you're carrying around. But be warned without a backpack or some other thing with more space you won't be able to carry many items. 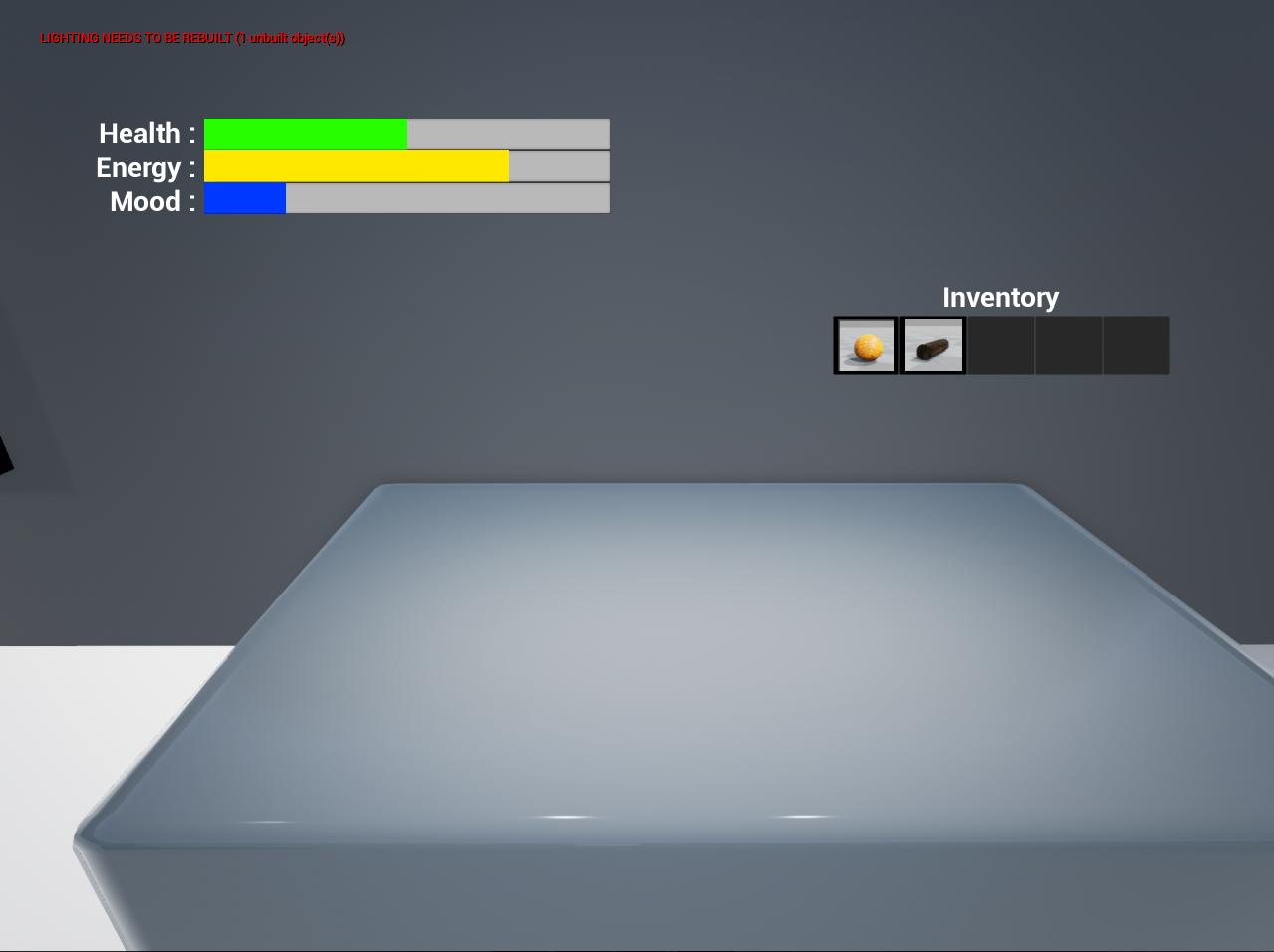 As you can see, you have five slots for carrying food, drinks, medicines and wood. If you carry five items you can choose between two options, use the item or drop something. 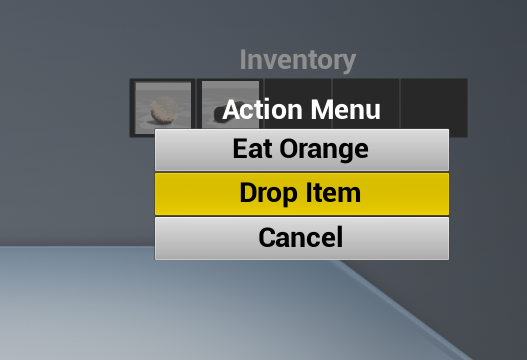 In this case I would drop the orange, but I could also eat it to fill my hunger bar a little. (The design of these bars and the inventory is of course WIP).
Now I have on item left, the logs, of course are they not edible, but you can make a fire with them. 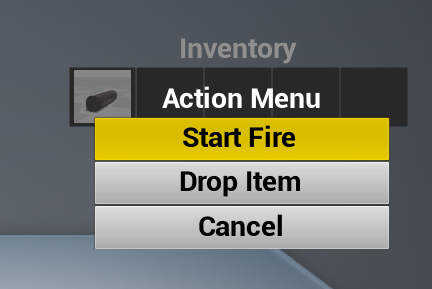 When you click this button a nice fire will be lit right in front of you (WIP too): 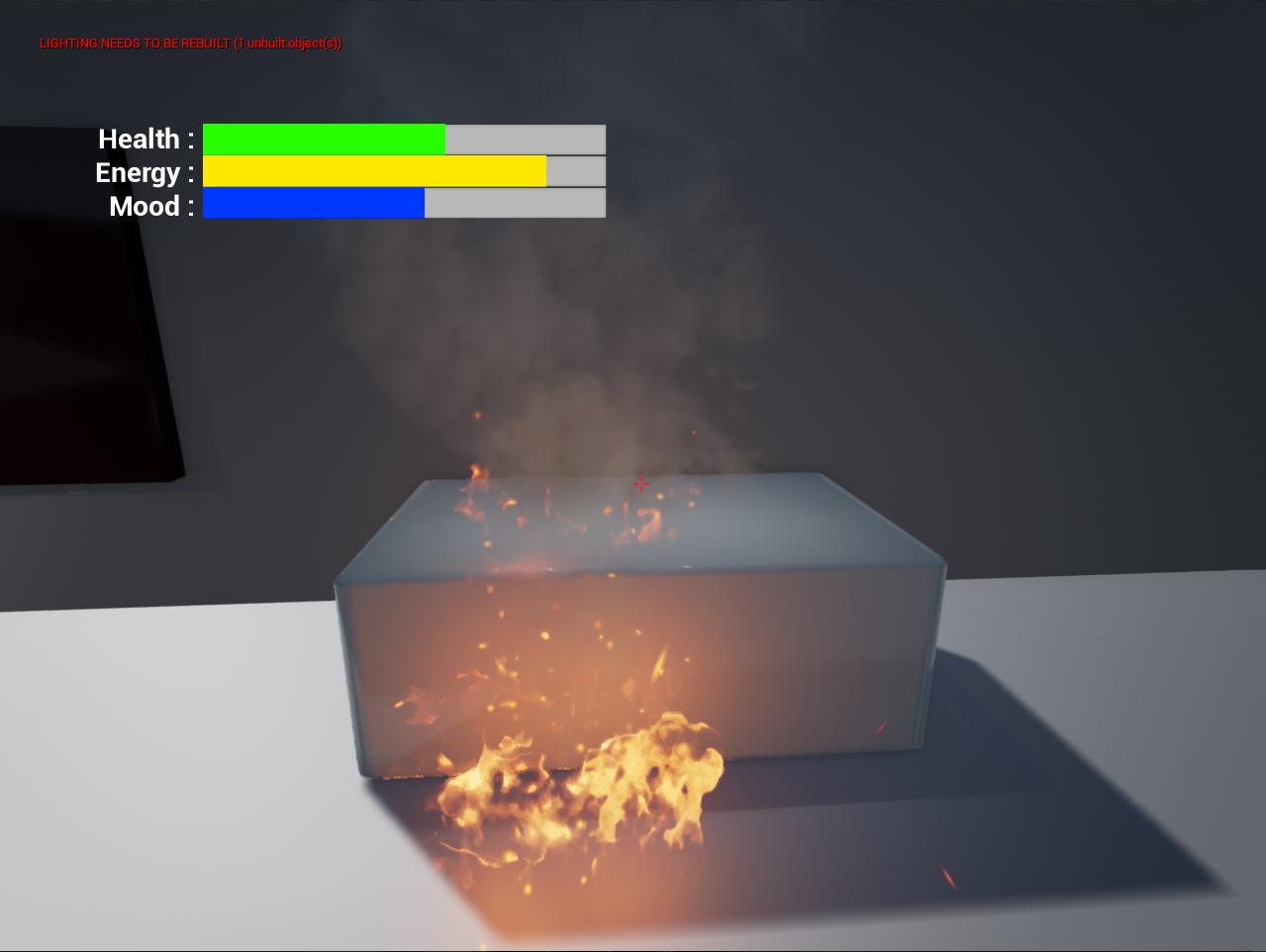 Now we get to the point which cause this update to be so late. We had a really hard time getting the weapons to attach themslves to the player. In the end we built a rather complicated workaround, in which we excluded the weapons from the normal items and built a new blueprint for every single weapon. 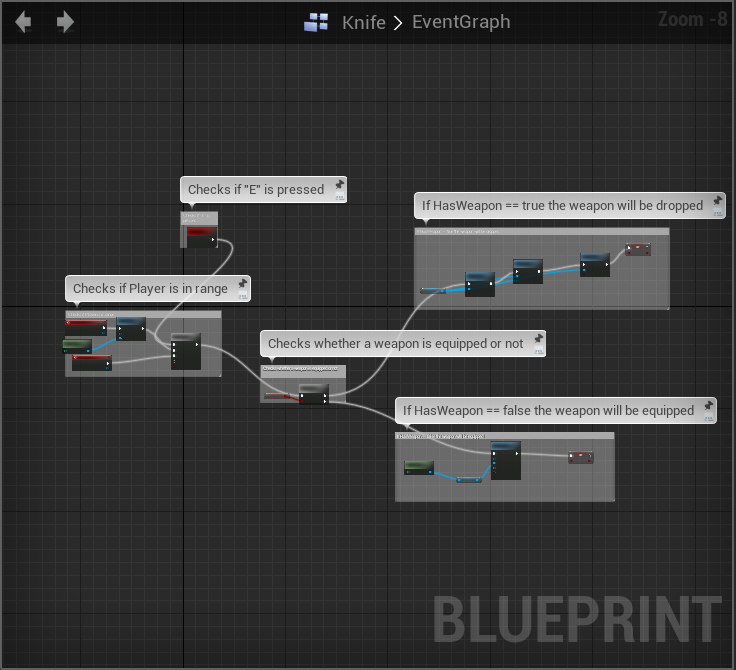 At the moment we have 4 weapons ready and ingame, but we're working hard to get the other weapons ingame as fast as possible. 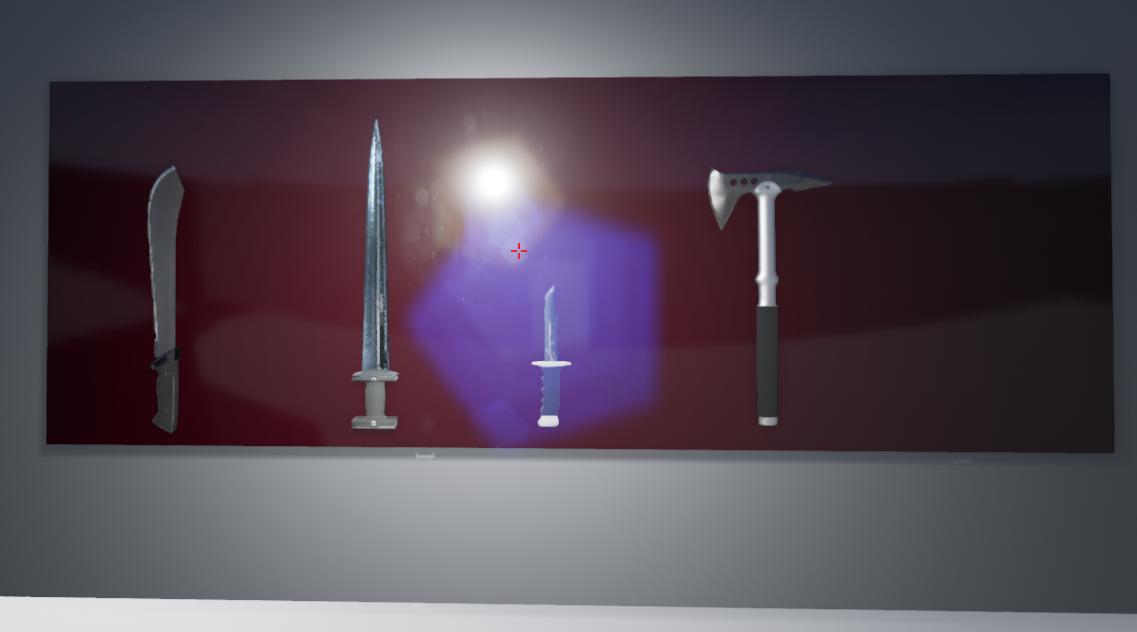 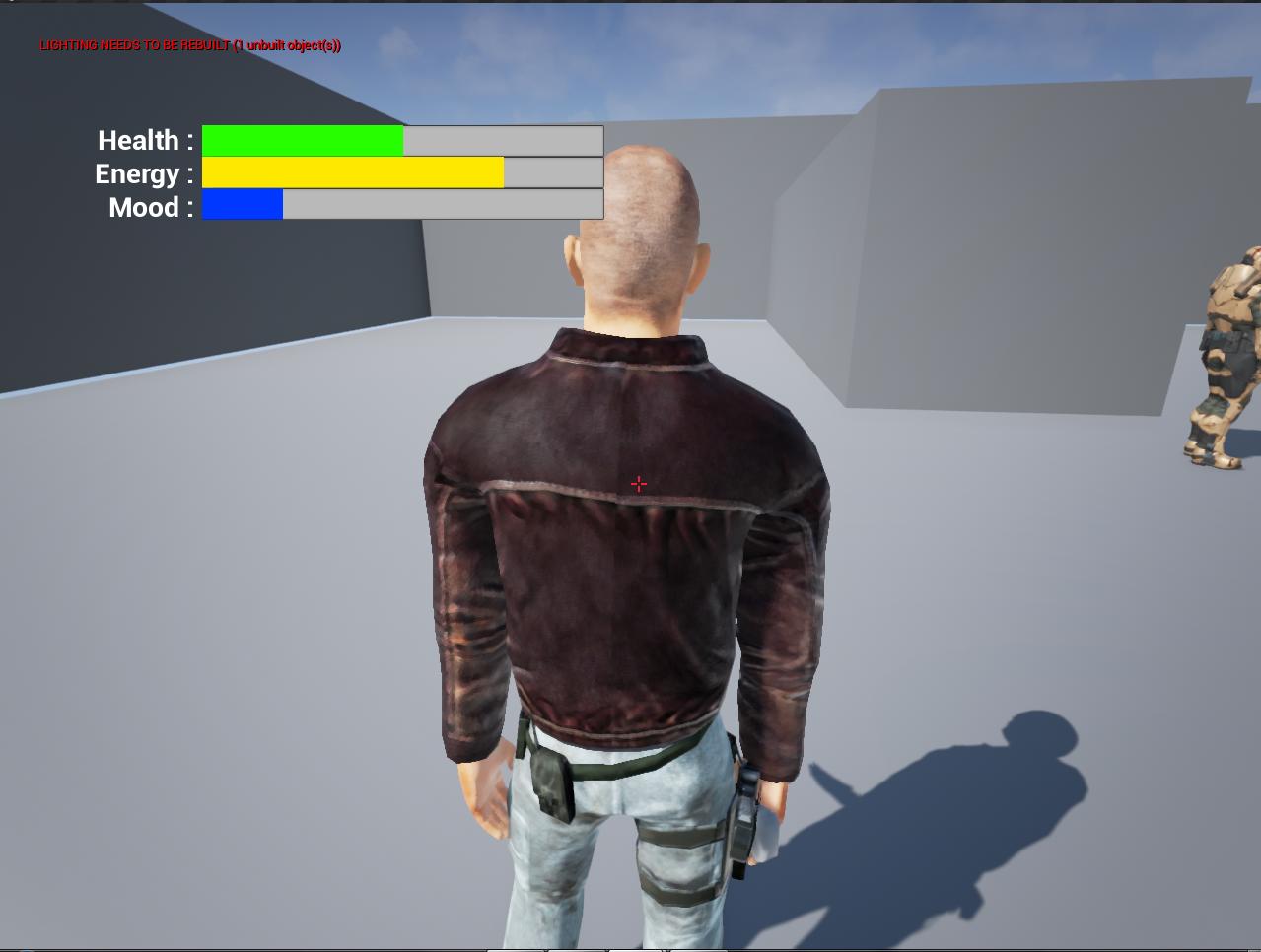 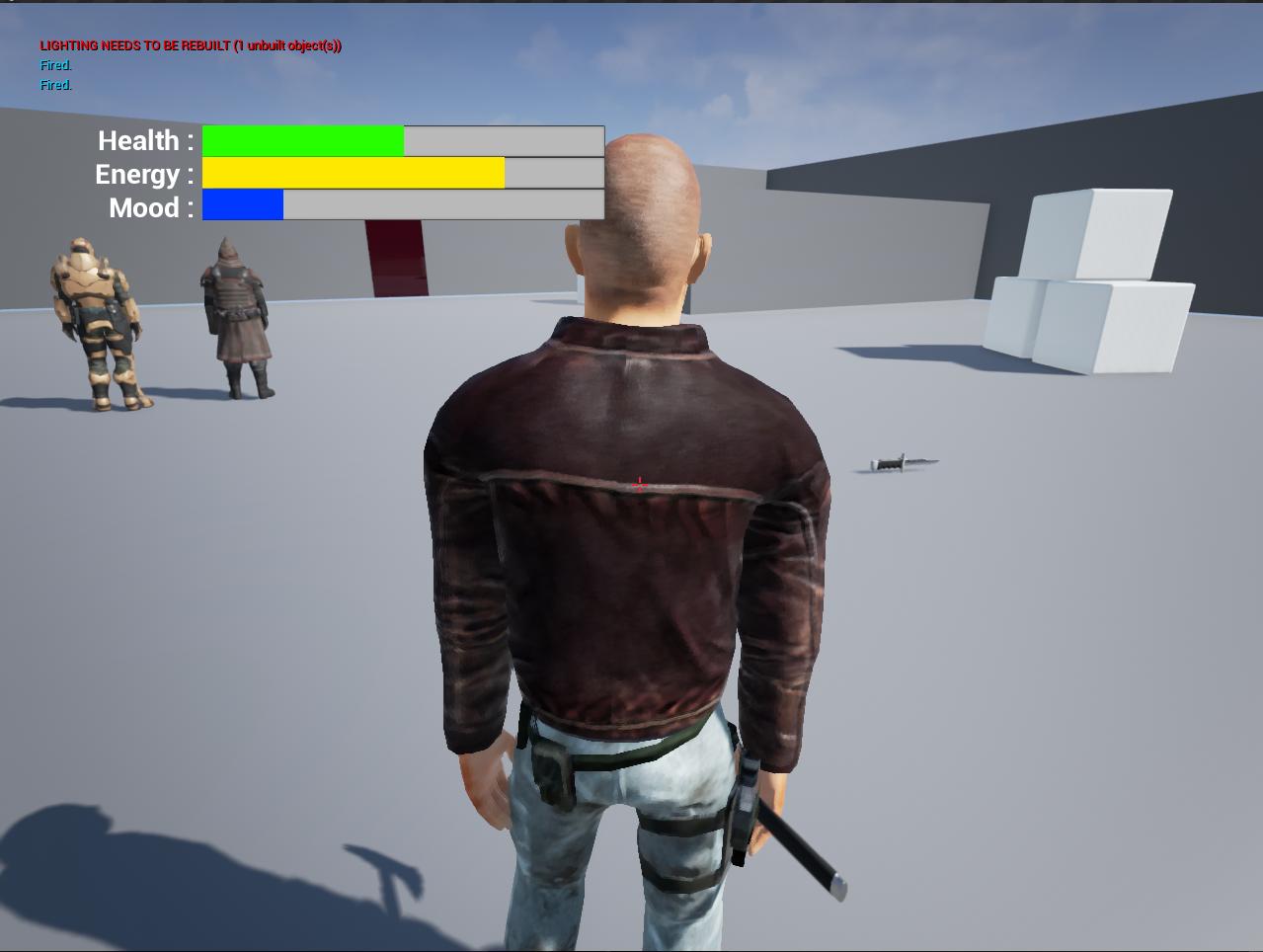 The weapons also can be "fired" (have a look at the upper left corner, we don't have animations for this yet).
Running is no problem too: 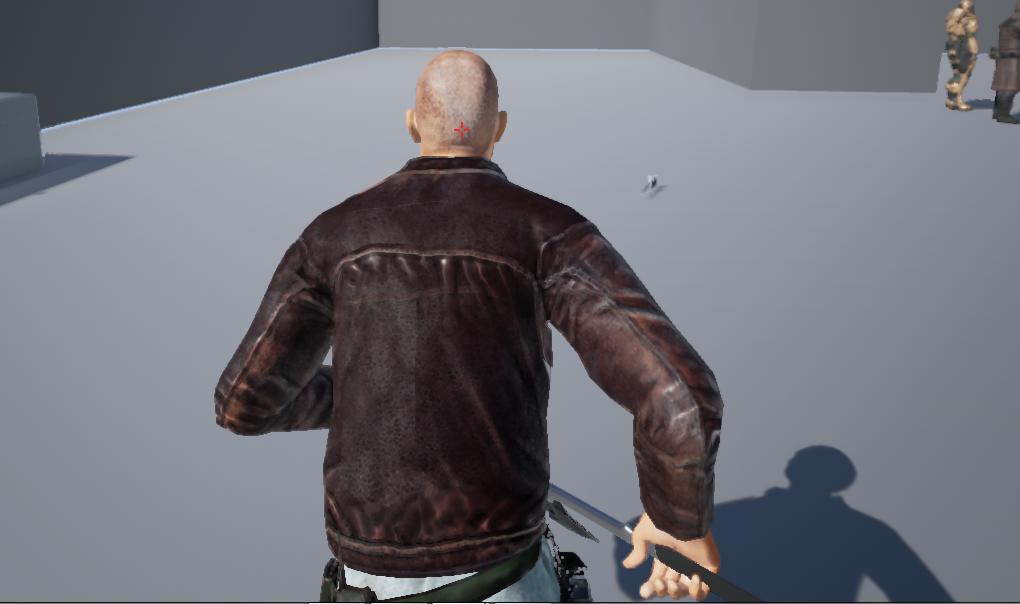 And last but not least:
No, the game won't be Third-Person. I chose that view so you can see the weapons attaching better, the blue guy wouldn't let his plastic shotgun go, so you wouldn't have seen our weapons.
And yes, you can carry exactly one weapon. An execption will be the bow, as you can hang it over your shoulders, but have you tried putting a knife or an axe into your pocket? Not so pleasing.

I hope you liked this update, and please don't forget to make suggestions what we should add to the inventory or the game in general (zip lines are already noted down ;) )

I think everything is looking great! The hands actually hold the weapons really well, a lot better than what it looked like in Unity. Are you planning to use the last character model (bald with leather jacket) in the game as well? I think it would be cool to use them as a basic human, and show contrast against the other characters. I do think the other two alien races could use a lot less armor, since it would be odd to see them taking any real damage against melee weapons with what they are wearing now. Other than that, great job!

Thank you very much! Yes, I too think holding the weapons looks better in Unreal Engine. Of course we could use the the last character model, but it won't be the character the player is using, as they are from a package of Mixamo which they gave away to use for free, so we can't modify him (the head is always visible when trying to align the camera for First-Person) same goes for the other two. I think we're going to hire a professional character modeler, so we can get the ones from the concept pictures. However, the second one needs this much of armor, as he is a soldier and won't fight in the arena. But I agree fully on the first one, he is wearing way too much armor.
Now I'd just like to thank you for always commenting on our posts, it really helps us knowing that somebody is following and making suggestions every time we post something.