Posted by UltimaRatioRegum on Jul 31st, 2017

Lots more coding this week! Let’s get to it:

I’ve implemented what happens when the player repeats compliments and insults over and over again (I have previously implemented the repeating of “general statements and questions”, i.e. almost everything, and repeating greetings, which are handled differently). When one says a compliment over and over, the NPC will appreciate it, and express their appreciation, but if you do it too much, they will begin to be a little bit puzzled; there are also some unique responses for repeated greetings being offered to particular classes of NPC. In the future I want to enable some greetings to be met with less positive responses if one greets repeatedly someone who might come from a culture which doesn’t especially like or appreciate the greeting in question.

If you repeat the same insult again, the NPC will quickly become even more annoyed than if you had simply said the insult once (which is itself a guaranteed mood drop) and will tell you to stop saying it, threaten you, become exasperated and ask why the hell you keep saying that, and so forth. Given that insults are unequivocally, well, insulting, this was a pretty easy group of phrases to code. I have also made it so that three or more insults in a row always has a 50/50 chance of ending a conversation: so be capable who you have a go at!

There was a bug with repeated comments; sometimes the game would seem to forget that you’d just asked something ten times, and if they answered, then said “why are you still asking this?” nine more times, on the eleventh time they would suddenly reply again. That was from the simplest of typos where the game was decided what kind of “why are you still asking this?” response it would give, where very rarely the game would select one which didn’t actually exist, and therefore default back to the previous sentence. This is now fixed.

The game previously only checked if someone’s mood had dropped to 1 or 0 to decide whether or not to end a conversation; this meant that if an NPC’s mood dropped from 2 or more to -1 or less, the game wouldn’t catch it, and they would go on talking and hating you, but not ending the conversation. This has also been fixed, and NPCs will end the conversation with you regardless of how low it drops. (It should be noted, the conversation does not literally “end” at this point; I need to add a dialogue box saying “This NPC has walked away” or whatever, and “Press Enter” to then end the conversation. I’ll be doing this before 0.8 is released, and shouldn’t really be too difficult; I’ll also need to add something when you talk to an NPC who has rejected you again, such as “I’ve told you, I have other things to do”, and the like).

I’ve given each civilization a list of reasons they might not want to respond to questions about particular topics. So people from an Isolationist nation might be disinclined to answer national or political questions because they are very wary of outsiders; someone from a theocratic nation might be disinclined to answer a religious question because that’s a matter for the state; and so forth.

Fixed a range of grammatical errors with the construction of sentences ,and discovered that in some cases, sentences were going through the system that varies each sentence for each culture twice, which was a big problem. That has now been fixed, shifting the “sentence varying” part of the process to something which only takes place once, and before. Before release I will need to spend quite a bit of time talking to every NPC I can find and dealing with every grammatical error I can possibly hunt down, but it’s a work in progress; the speech generation system is so complex, and so much varies, that it’s hard to pin down too much in any one sweep.

If people don’t want to respond to the questions you’re asking for personal reasons, there is now a set of responses in place for them explaining that they don’t want to respond for political reasons, or for religious reasons, or whatever. There are also some unique responses if you’re asking particular classes, so an inquisitor might mention it’s particularly suspicious if you keep asking about heresy. What this means if that there are many, many layers of questions and answers that the player will rarely, but sometimes see, and should provide a lot of variety. In this case, you need to ask someone something, it needs to be a topic they would be willing to reply to, and know something about, but they don’t want to talk about, and they decide not to talk to you about it, and they’re of a particular class and asking a particular question, you’ll get a unique response. I want these chains to be as long as possible, to maximise the chance of the player encountering a new response, no matter how long they’ve played the game.

I’ve put a lot of work into these responses, which take three forms: “uninterested” (the person doesn’t fancy talking about the topic), “stupid” (they think it’s a dumb question to be asked), and “suspicious” (they are troubled by you asking something).

In the case of the “Uninterested” response, they will begin with a sentence along the lines of “I don’t want to answer that” or “I don’t feel like talking about that”. After that, they will follow up with a comment that might be a general comment, or a class-specific comment. If it’s a general comment, they might say “It doesn’t really interest me”, or “I don’t think about such things”, or “Aren’t there other more interesting matters to discuss?”, and so forth. Class-specific, meanwhile, might be something like a miner saying “I should really get back to the seam…” or a priest saying “I would really prefer to speak to you about [god]”, or things of that sort. These have a nice variety, and I was able to think of at least three options for every class, as well as many general variations, all of which will of course vary across culture as with all sentences, so there’s a huge amount of variety here in the kids of responses one will get out of NPCs.

With the “Stupid” response, NPCs will instead open with something like “What a weird question” or “What a strange thing to ask me”, and then proceed to again, either give class-specific or general responses. General responses might be something like “Am I really the person to ask about this?”, or “That makes very little sense”, or “Why are you even asking?”. For the class-specific responses, they will reply in a way that emphasises why this was an especially daft question to ask that NPC class. If you ask a jailer about geography, they might say “My work is in here, and always will be”; if you ask a Concubine about war, they might say “What could I possibly know of battle from in here?”; if you ask a doctor about politics, they might say “Diseases and ailments care not for one’s political allegiance”; and so on. These should help the player to think about what kinds of things they should be asking different kinds of NPCs, what classes and questions make sense together – as well as what classes and questions definitely do not make sense together – and, as ever, dramatically increase even further the variety of things people might say to you in the URR world.

For “Suspicious” answers, they start off the same as the “Uninterested” answers, by saying “I don’t really want to speak on that” or whatever, but then things change. For each tag (“political”, “religious”, “geographical”, etc) some NPC classes have special responses, and all have a set of general responses. For example, asking about politics to a concubine might have them ask if you if you’re only asking because of their closeness to a ruler; for other classes, they might say “Politics is a strange topic for you to be asking me about…”, or equivalent. If one asks an individual question, a clerk might emphasise their personal life has no bearing on their work, or an inquisitor emphasises that their purpose is simply to pursue heresy, not to think about themselves. If one is asking about military matters, an officer might question why you want to know about potentially classified material, whilst someone from a militia questions why you’re interested in the defence of their homeland. There are then also some responses based on national ideologies, too, which will sometimes be thrown into the mix. Again: maximising number, maximising variety and difference, maximising the potential for the player to always be discovering new possible responses.

For this week’s sole coding screenshot, here’s a bunch of the “defaults” for the uninterested answers (which are picked at random, then varied for each culture according to procedurally-generated constraints and norms, as usual): 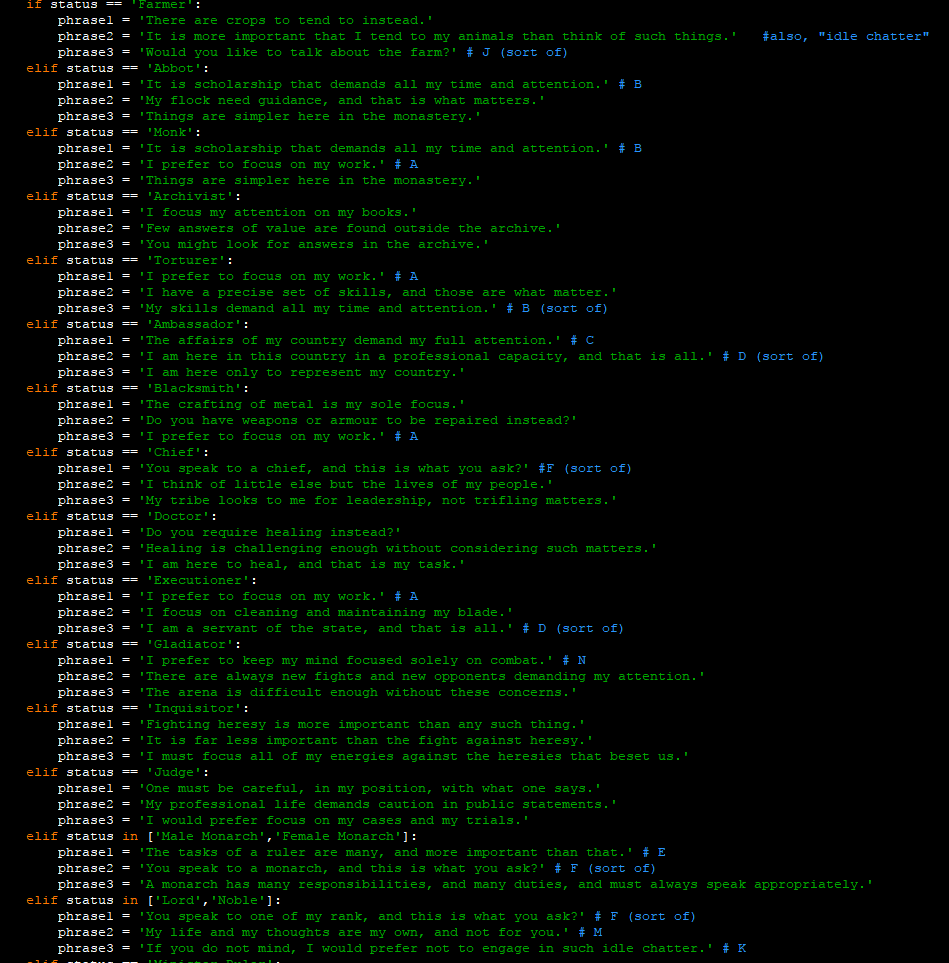 Next up: in the coming week, my objective is to finish fixing any remaining bugs to be found in the above set of points, and then start – I anticipate this taking several weeks – putting into place a structure for filling in the “[god]” and “[nation]” and whatnot parts of sentences, i.e. the parts that vary every time they get uttered and cannot be stored, but have to call reference to a wide range of different saved elements of the game world. I have no idea how fast/slow this will go, but all I can do is get started, so I’ll be doing that next Saturday/Sunday. See you all next week for the first steps into this crucial part of the conversation system!