First URRpdate in months, and it's a big one - major progress on conversations, and it feels amazing to be back to programming.

Posted by UltimaRatioRegum on Jul 3rd, 2017

Firstly, I’d like to express my sincere and heartfelt appreciation for the outpouring of kind wishes after last week’s blog post, both here, and on Reddit, and Twitter, and by email, and elsewhere. They are deeply appreciated and deeply felt, and are a real credit to what a supportive bunch of people the roguelike community (and those who read my blog for the non-roguelike posts!) are. I don’t think there are a lot of games communities that would have responded so positively, and it really means a lot to me. I won’t disappoint you all; we’re back to coding, and 0.8 is back in development. I’m also going to get back to weekly updates, which will mostly be development logs/patch notes in style – however short they might be – with some longer pieces interspersed.

So, as mentioned in last week’s entry, my objective is now to devote one full day – either Saturday or Sunday – each week to programming until 0.8 is released, and beyond. As such, this weekend has been the first weekend of that new pattern (I’ve actually been coding both Saturday and Sunday), and for the first time in months I opened up URR’s files (or rather, file…) and took a look at where everything was; I also took some time wandering around the game world to see how everything was functioning and what still needs to be done. My first feeling, I must be honest, was a deep satisfaction at coming back to the project and wandering around the game world. Having slightly forgotten where I was up to before the monograph crunch/burnout began, I was pleasantly surprised to see just how many topics one could talk to NPCs about, and how intelligently (I think) they responded; how alive with activity the cities and towns were; and just how different the world felt to anything else that I’ve played, something in its texture, or the potential to fall down a rabbit hole of conversation, or ‘l’ooking in detail about the world. It was a tremendously motivating return, and one long overdue. So, without further ado, here’s the changelog for this weekend:

So: for a first week back, I’m incredibly happy with this progress! In the coming weekdays I’ll be focusing on my current academic work and continuing to put the final touches and edits to the book, then next weekend, I’ll be back to coding for at least one of the two days. I really feel incredibly invigorated by this weekend, I have to say – I’m really excited to continue pushing the conversation system to point where I can release the first version of it in 0.8. Lastly, and very briefly, here’s a little debug of some sentence generation and whatnot; you’ll see the sentences (on the right hand side) are almost entirely grammatically correct (they are the generated versions of the default sentences on the left); I really like letting these run and just seeing what the game can produce, and the different ways the game can utter the same sentence. And now, to conclude this entry on a sentence I’ve been wanting to say again for months: see you all next week for another URR 0.8 update! 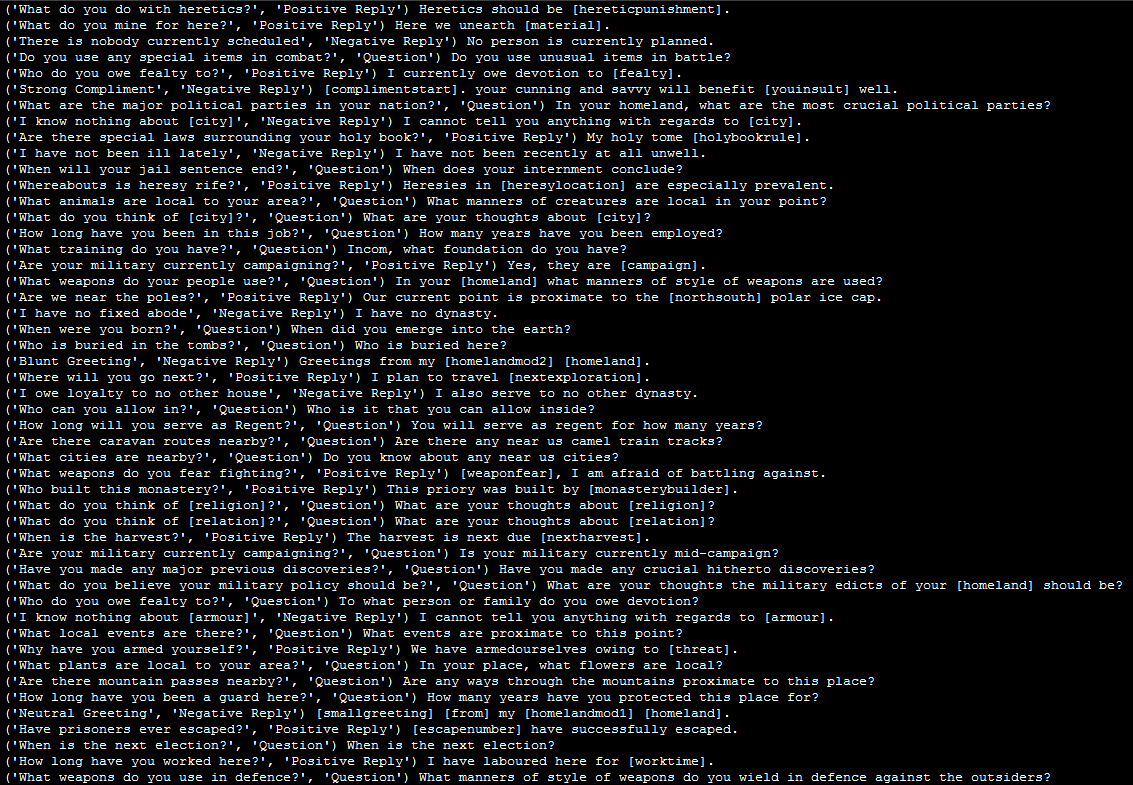 if you went TL;DR, all of this mostly means he worked on a workout for some "graphical error", and some bug hunting, also corrected grammatical errors, And added another bunch of conversacional trash we will enjoy seeing while conducting our investigation in the generated world

Hahaha. Close enough - but a lot of it!