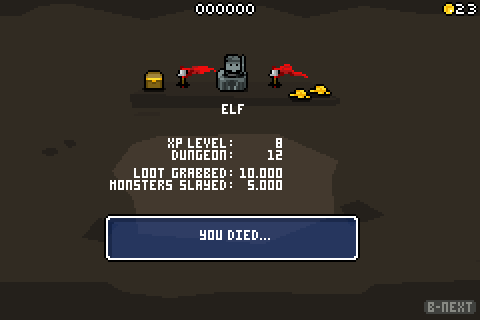 The final stretch of development has started. And not talking about “the last 10% take 90% of the time” but literally doing the final stretch. It basically means I’m playing the game non-stop for a few days now, making small changes, tweaks and bugfixes directly as and when I run into them.

The last few weeks I’ve also added various extra things that are made easier due to all the content which is already in the game. So I decided to add “special rooms” that randomly appear in between the normal dungeon levels. These rooms can contain just a bunch of coins, or be more of an arena style room with for example 3 cyclops rushing at you in a close encounter. Defeat them, and you get the key to leave the room.

I’ve also been working on the 2-player coop mode… and it’s damn good!

Luckily I now had some experience doing 2-player coop modes thanks to Gunslugs, so all my enemy code already had checks to see which player was near, who to give energy or items to, etc. And the camera code is 99% a copy of the Gunslugs code, so it was all pretty easy to implement. The biggest problem was redoing interface area’s to make sure it allows for two player selecting their avatar, entering shops, getting quests.. but it all runs and works nicely.

With all the play testing I also found out that there are actually a lot of ways people can play this game, so it will be interesting to see how that is received by the players. You can play it as an action game, shooting everything and going a bit gung ho (better make sure to pick the right avatar class for this type of play) or you can play it more strategically and make sure to only grab chests or hearts when you really need them, find other ways around enemy swarms, etc.

And that’s not even adding 2 player mode, where you can really work together or just totally screw each other over by grabbing items you don’t need before your buddy does

So.. what’s left on the ToDo list:
- tweak the gameplay a bit more, mainly for the later dungeon levels
- Music! Gavin still has to come up with something “dungeon” style, but we have an idea on how to vary the music, so progress is made!
- minor things like: clean up the game over screen, maybe a few more animation screens, etc.
- Achievements and leaderboards !
- porting to iPhone/iPad (universal). This should take about a week.